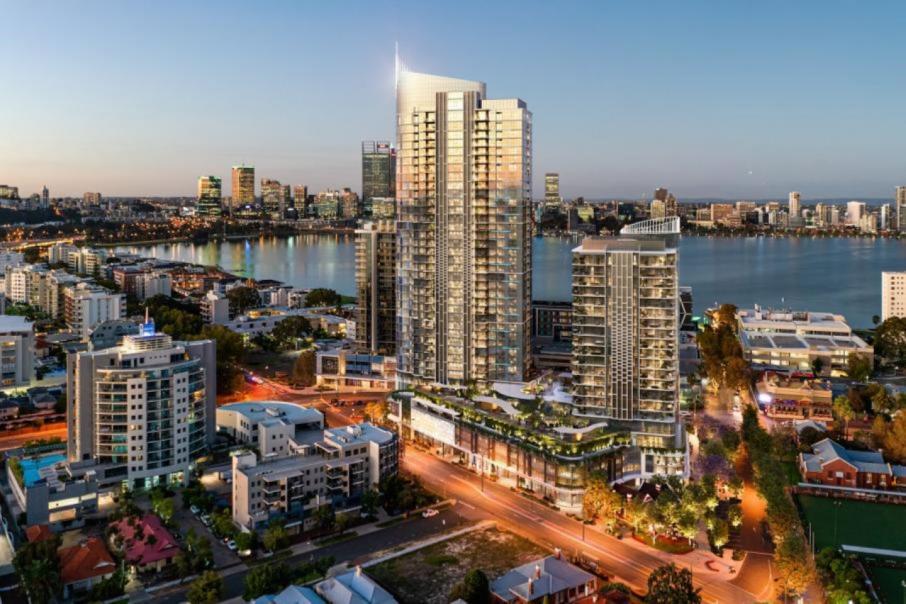 Located on a triangular-shaped site in South Perth, Civic Heart will be bounded by Mends Street, Mill Point Road and Labouchere Road, with the development also including the revamp of South Perth’s historic police station and post office buildings into commercial and hospitality tenancies.

The project has been on the drawing board for several years, undergoing a lengthy approvals process that prompted the state government to intervene after the Metropolitan Central Joint Development Assessment Panel rejected it on claims the architectural design lacked the “memorability and distinctiveness” required for the landmark site – despite City of South Perth planning officers recommending the project for approval.

The development was designed by SS Chang Architects and underwent several iterations, following feedback from planning authorities and then underwent an independently appointed Design Review Panel.

Finbar estimates Civic Heart will have an end value of more than $400 million.

Ms Saffioti said the project would boost job creation as the economy continued to recover from COVID.

“This is a very important project for locals, future residents and the people of Perth and one that is set to create a vibrant residential and commercial hub with extensive areas set aside for public amenities,” Ms Saffioti said.

“It will provide a gateway to the rest of South Perth, linking the foreshore to the Perth Zoo and inject significant life and commercial activity into the precinct.”

Finbar managing director Darren Pateman said the company was very pleased to see the project under way after what had been a lengthy and at times frustrating approval process.

“This is our most significant residential project in WA in our 26-year history and a significant project for both the local community and Western Australians more broadly.”

“Civic Heart is located on an iconic and highly sought-after location that will rightly become the gateway to South Perth.”

“The design is befitting of the project’s strategic and aesthetic importance and upon completion will become one of South Perth’s key focal points.

“We would like once again to thank the Minister for resolving the approval process and for her ongoing support which has been instrumental in getting us to this key stage.”

Finbar said it had secured more than $75 million worth of sales at Civic Heart to date and ‘record sales’ across October, November and December.

Of those sales, Finbar said it secured 49 deals with an end value of $29 million in December alone.

Mr Pateman said the strong level of sales was underpinned by the health of WA’s economy and the state government’s handling of the pandemic.

“The number of Western Australians returning home from interstate and overseas has also contributed to stronger buyer activity across Perth as has the ongoing strong performance of our resources sector,” he said.

“This milestone event for such a key project comes at a crucial time in terms of the ongoing recovery of the WA property sector and for us as a company whose first development 26 years ago was located just 200 metres from where Civic Heart will take shape."