Rethinking the funding of trams might actually make the whole idea work. 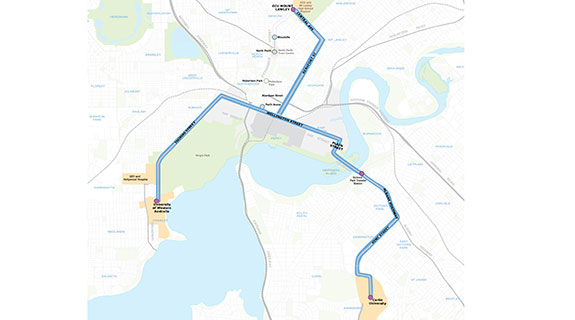 getting started: The knowledge ‘wishbone’ would at least get the light rail heading north and allow flexibility for communities and business to bid for the next stages.

Rethinking the funding of trams might actually make the whole idea work.

Dare I say it but the state government’s decision to delay its proposed MAX light rail project might prove to be the best thing it has done.

It’s not because I think light rail is a bad idea, just that the current debate is focusing minds on what we really should do. It is the sort of debate we should have had during the election, rather than after the conservatives had won and decided they could do without it.

As past readers will know, I am sceptical of a lot of the arguments thrown around public transport. My own research, published in these very pages, showed that our public transport system consumers pay about one third of the operational cost of their ride and about quarter of the real cost when capital is considered.

Of course, there are numerous incalculable benefits from public transport – from emissions to housing efficiency.

The map below highlights another, even harder to define benefit – the potential for an ‘arc’ of knowledge, the light rail link between the University of Western Australia and Curtin University, with the CBD in between. This map, from Curtin sustainability professor Peter Newman, goes a step further, creating a ‘wishbone’ of knowledge by including the inner-city Edith Cowan University campus at Mount Lawley.

That ‘knowledge’ component might be wishful thinking, but it has advantages over the state government’s original idea of heading north to Morley because it is shorter and, therefore, cheaper. Most experts reckon that, with this kind of infrastructure, even just a short link is sensible because it gets it started and makes the case for expansion easier.

My view is that everyone should pay closer attention to the real cost of the transport they use; because if public transport cost the state less, it could invest in more of it. Win-win, as they say.

So I am heartened by where the light rail debate is going because it is increasingly its most avid proponents who are now better communicating the more cost-efficient ways on going about building such a network.

In 2013, when I met Jeff Speck, author of Walkable City, he made the point that some key US light rail infrastructure had been financed by land developers who realised that the best way to speed up interest in their project was a permanent link between their site and the downtown employment area.

“Light rail lends itself to private sector involvement but only if the land development outcomes being sought are built into the whole project,” he said.

For instance, Professor Newman highlighted Infrastructure Australia’s approach to the Gold Coast’s light rail system was to run it through areas with potential for redevelopment.

“Thus the funding was given based on a PPP process seeking expressions of interest from private bids to design, finance, build, own, operate and develop land as a basis for funding,” he said.

While the inner north of Perth is well developed, putting a short line to ECU and then asking for expressions of interest for the next link makes sense. It doesn’t have to be greenfield development. I would bet many existing local government areas or local chambers of commerce could be encouraged to bid for the line to head near them if they saw the benefit.

The big reason the private sector might contribute to funding is that light rail is permanent.

No property buyer or developer is going to commit real investment dollars on the basis of a bus route. It is too easy to change. Light rail can’t easily be shifted.

I’ve always been a fan of the 50-year Stephenson-Hepburn plan for metropolitan Perth because it was great blueprint for our city.

However, one of its failings was it simply didn’t require trains or trams. At least I assume that was the case, as the tram system was dismantled three years after the plan was accepted and the Perth-Fremantle railway was closed for some years until the 1980s, and some planned rail corridors were rezoned and sold to the public.

We need a new plan that allows for such infrastructure, but with the flexibility to move it to where the private sector wants it … and will pay.