With just over a week to go until the state election, the business community was eager to interrogate the treasurer and his key rival. 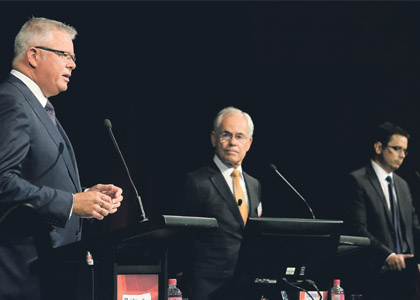 With just over a week to go until the state election, the business community was eager to interrogate the treasurer and his key rival.

FOR politics junkies and the business community alike, it was a must-see: a debate between two men seen as potential future leaders of their respective parties and tasked with handling the state’s economy should they taste success at the polls.

A sold-out WA Business News Success & Leadership breakfast this week played host to Treasurer Troy Buswell and Labor’s treasury spokesman, Ben Wyatt, in their only debate for the campaign.

With both sides of politics making big-ticket infrastructure announcements throughout the campaign, guests were keen to hear how the parties intended to fund their promises and what they intended to do about the state’s mounting debt.

Debt has emerged as a growing issue during the campaign. The opposition has made much of the fact that the state owed $3 billion when the conservative government came into power. That figure is projected to rise to $18 billion by the end of this financial year.

Yet, both major parties have big spending plans.

It was in that atmosphere that ratings agency Moody’s last week reaffirmed its negative outlook for WA, warning the state could lose its AAA credit rating unless further efforts were made to balance the books.

It should have set the scene for a showdown on who was going to manage the financial legacy left to the next generation.

Mr Wyatt sought to focus on the numbers in his opening remarks, criticising the 400 per cent increase in net debt presided over by the Liberal-led government, stating the strong financial position Mr Buswell’s government had inherited from Labor had been squandered.

The Labor finance spokesman said his party was forced to make tough choices in order to find savings for its campaign commitments.

In contrast, Mr Buswell preferred the emotive touch to the more precise numerical approach used by his rival.

He highlighted the sustained growth of the state’s economy to argue that future prosperity was dependent on the delivery of major projects like the Oakajee port project and James Price Point gas hub.

Playing on those secessionist heartstrings that forever run beneath WA’s easy going veneer, the treasurer said if WA could somehow be detached economically from the rest of the country it would be the 39th biggest economy in the world.

This is music to the ears of those who have always believed WA has played second fiddle to the eastern states.

“This year we anticipate the state’s economy will keep growing at about 6 per cent,” Mr Buswell said.

“You would struggle to find a mature, market-based economy anywhere in the world that’s performing like that.

“These figures, to me, indicate that our economy is going through a very unique period of economic transformation.”

While Labor has identified $4 billion worth of savings to fund its flagship Metronet heavy rail project, including moving the location of the new football stadium from Burswood to Subiaco, the government has indicated it will fund its major commitments through further debt.

Mr Buswell said a Liberal government was capable of maintaining fiscal balance and argued that “strong, sustained surpluses” would ensure the debt was repaid.

It was a rare point of difference in an event that failed to spark even a minor confrontation between the financially literate opponents who are known for their parliamentary repartee.

In fact, in a number of policy areas, the debate reaffirmed the similarities of the major parties’ positions, rather than the differences. Both Mr Buswell and Mr Wyatt confirmed their support for the Royalties for Regions program and the state’s Affordable Housing Strategy, and ruled out the introduction of toll roads and the privatisation of state-owned utilities.

Both men backed spending in science, were excited by the opportunities arising from the Square Kilometre Array and were keen to emphasise their willingness to take the fight to the Commonwealth.

The federal government’s recent decision to tighten the rules around the 457 visa scheme was met with opposition from both Mr Buswell and Mr Wyatt.

“What you have here is a federal government who are panicking,” Mr Buswell said.

“This announcement is nothing to do with the labour market and filling jobs. It’s all about shoring up support from unions like the (Australian Workers Union).

“It’s an attack on Western Australia by the federal government.”

Mr Wyatt also distanced himself from his struggling federal Labor counterparts, making it clear the state Labor party would not support restrictions on the skilled workers intake.

His words underscored the negative impact of the federal government’s poor performance, like a weeping wound that flared up every time it was expected to heal. No wonder Prime Minister Julia Gillard has been kept at a distance - a continental one.

“We will be forever, it seems, responding to federal Labor’s various policy announcements that they make along the way,” he said.

“Anything that has a negative impact on Western Australia, let me make clear, will be opposed.”

On Royalties for Regions, Mr Buswell said the government saw investing in the regions as vital for the future strength of the state’s economy.

“I think when you look at Royalties for Regions, it has delivered excellent outcomes right across regional Western Australia,” he said.

Apart from being the finance spokesman for Labor, Mr Wyatt represents the party on indigenous issues, which would give him more insight into regional WA than most of his fellow parliamentarians.

With business taxation reform high on the wishlist for industry groups, Mr Buswell used the debate to announce that a Liberal government would raise the payroll tax liability threshold by $100,000 over the next three years.

However, the announcement did not go down well with a small business owner in the audience, who pointed out that the treasurer’s “small commitment” would only enable most businesses to hire one more employee.

Industry groups led by the Chamber of Commerce and Industry Western Australia have called for the payroll tax threshold to be increased to $1.5 million and then indexed.

Mr Wyatt said although he sympathised with small business owners, it would be fiscally irresponsible to change the threshold while state debt remained at such high levels.

“At the moment, tax cuts are effectively debt-funded,” he said.

“We’ve still got from (Premier) Colin Barnett ... a number of commitments that still have to be paid for, and at the moment, effectively, they’re being paid for by debt.”

The true cost of Labor’s Metronet plan has been the subject of considerable debate, with Mr Buswell claiming the Public Transport Authority had put a $6.4 billion figure on the proposal - well above the $3.8 billion figure flagged by Labor. However, Mr Wyatt said the PTA documents “made no sense”.

Mr Wyatt said he had submitted Metronet to treasury for costing on the morning of the debate, prompting Mr Buswell to argue that Labor should submit more of its policies for greater scrutiny.

“All of our costings will go to treasury,” Mr Buswell said.

“From an opposition point of view, to send one part of your costings to treasury is not allowing the level of scrutiny that should be applied.

“We’re pretty comfortable with where we’re going to land. The challenge is, for the opposition, to present all of their costings for proper scrutiny.”

Labor has opted to have its remaining commitments costed by an independent accounting firm, rather than by treasury, which Mr Wyatt pointed out was in keeping with the tradition of the Liberals in opposition.

While both men remained resolutely on message throughout the debate, Mr Buswell admitted that the staff at treasury might be in for some sleepless nights with the government set to submit its policies for costing at the 11th hour.