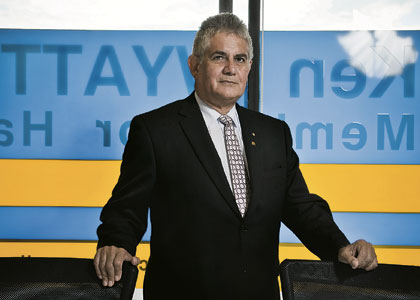 HARM AVOIDANCE: Ken Wyatt is a director of the Luke Adams Foundation, which aims to stop anti-social and violent behaviour in Perth. Photo: Grant Currall

DURING his years as a primary school teacher, Ken Wyatt worked to develop respect and integrity in the minds of the year seven students he taught.

While now, as federal member for Hasluck, much of his time may be spent on political and economic issues, Mr Wyatt still works at a grass-roots level, particularly in his role as director of the Luke Adams Foundation.

A young organisation, the foundation has adopted a wide-ranging brief - – to proactively eliminate violence and anti-social behaviour in Perth.

Mr Wyatt said he felt compelled to get involved in the community driven movement to stop violence in Perth, which followed the attack on young Swan Districts footballer Luke Adams in Northbridge earlier this year.

“We have got to teach young people, men and women, that violence is not the way to resolve issues and nor is it the way to address rage within you,” Mr Wyatt said.

Mr Wyatt developed an understanding of the needs of youth in preparing youth for the challenges of adult life through his work with secondary school program Mind Matters.

The program aims to tackle mental health issues with training in self-esteem and resilience, and skills in coping with teenage anger and grief.

“It enabled teachers to take a whole-of-school approach to equipping young people with the tools of resilience so that when they got out into the pathway of life then they had some strategies they had been taught and that they had shared with their peers.

“In the long term, that means we will have less people [sic] seeking mental health intervention because they will have been strategies to deal with matters that they thought were beyond their control.”

My Wyatt said part of the foundation’s work would use educational campaigns to reduce the number of violent attacks in the city, which hopefully would lessen the flow-on effects to families and the wider community.

“We read in a newspaper that someone has received a king hit, they are hospitalised, and their health is deteriorating. We forget the anguish the family are going through, we forget the impact is has on friends and immediate family,” he said.

“After a while the story goes away but what we don’t see is that long enduring result of someone’s aggressive behaviour impacting a family beyond the first incident.”

Alcohol consumption and sleep deprivation, and the impact these can have on people’s judgement, are all influencing factors when it comes to violent attacks, according to Mr Wyatt.

While alcohol was a just part of social interaction in the days when My Wyatt was growing up in country WA, he said things have changed.

“Young blokes in our time also got drunk, but they didn’t go and pick fights in the way they do now and they didn’t react in the same way. It is though our societal norms of aggressive response have changed, not for everybody but for a few,” he said.

“It seems to be a trend that you either attack an individual from behind or hit them when they least expect it and then when they are down you kick them these days. I find that to be abhorrent behaviour. Fundamentally it is cowardly.”