The chairman of a state inquiry into the impact of fly-in, fly-out work practices on mental health is confident Western Australia can enact a raft of recommendations to reduce suicides and improve wellbeing for the state’s 60,000 Fifo workers, despite admitting the federal government’s response to a recent similar national inquiry was ‘lame’. 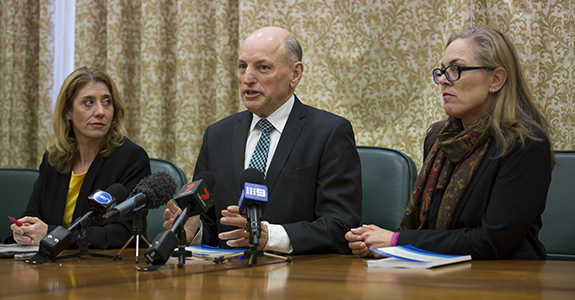 The chairman of a state inquiry into the impact of fly-in, fly-out work practices on mental health is confident Western Australia can enact a raft of recommendations to reduce suicides and improve wellbeing for the state’s 60,000 Fifo workers, despite admitting the federal government’s response to a recent similar national inquiry was ‘lame’.

Following tabling of the report in state parliament today, inquiry chairman Graham Jacobs told reporters it was now in the hands of the state’s Department of Mines and Petroleum, Mental Health Commission, Mental Health Law Centre and industry stakeholders to enact the 30 recommendations that came from 42 findings.

“I believe there’s enough teeth there ... to make this happen,” Dr Jacobs said.

He said he did not think WA would take a largely hands-off approach as the federal government had earlier this month when it agreed to only four of 21 recommendations made in an inquiry into Fifo practices that considered evidence from across Australia.

While Perth-based resources groups welcomed the federal government's decision to not increase intervention in the sector, local researchers and Fifo lifestyle support groups panned the Commonwealth response, labelling it disappointing and a missed opportunity.

Dr Jacobs said WA, which has the largest Fifo population in Australia with almost 10 per cent of its population directly affected by the work practice, had a greater impetus to act.

“There is a recognition across all parties that we have a responsibility in this place, it’s bipartisan,” he said.

“We’ve made some clear recommendations around a code of practice and unfortunately the response to the federal ‘Cancer of the bush or salvation for our cities?’ inquiry – I agree with (former independent federal member for New England) Tony Windsor –  the response was lame.

“We have a responsibility to workers and unfortunate events like the (Fifo worker and suicide victim) Rhys Connors of this world to make a difference; and I believe the opposition and the government can see that and I think we made a good case.”

Fellow report author Janine Freeman said it would be in the industry’s interests to put in place its “reasonable” recommendations because they addressed legally enforceable hazards.

“You can’t not put into place, otherwise you place yourself ... at risk in terms of your legal risks,” she said.

Despite the inquiry being sparked in August last year following media reports of the suicides of nine Fifo workers, the report was unable to verify them.

Dr Jacobs cited “a mishmash of figures” from varying sources including the Department of Mines and Petroleum, the coroner and the police, as the principal obstacle.

Consequently, one of the recommendations has been to set up a sole searchable database to keep those statistics.

The report found the prevalence of mental health problems among Fifo workers was about 30 per cent, significantly higher than the national average of 20 per cent.

It reiterated earlier findings that the demographic features of the Fifo workforce (being predominantly male, between 25 and 45 and working in a labouring role) meant they were at a greater risk of mental health problems than the broader population.

As spoken to by Peter Miller, the stepfather of Rhys Connor, who took his life in 2013 at a Rio Tinto mine site in the Pilbara, the report also found “ordinary people who suffer from stressful life events, particularly relationship breakdowns, were vulnerable to suicide”.

Mr Miller has previously spoken about how in a matter of weeks his 25-year-old son went from presenting as a normal and happy person to one overwhelmed by depression, following a relationship breakup and a sense he could not afford to miss a Fifo swing, despite breaking out in tears at the thought of leaving his young son.

The report said that despite hearing arguments that Fifo workers should only be selected for the role if they were more suited to the itinerant lifestyles, it was the committee’s view that the industry’s emphasis should instead be on tailoring Fifo roles to accommodate the mental health needs of all its workers.

To that end, it recommended a code of practice be enacted to encourage a set of work arrangements including even-time rosters and allowing workers to leave remote sites or engage with local communities on their days off.

Mr Miller said he was particularly pleased to see a recommendation that workers who were experiencing mental health problems be able to “put their hand up” to be evacuated home for a length of time to deal with those issues, without fear they would lose their jobs.

He also expressed confidence the industry was willing to enact the recommended changes to better protect workers’ mental wellbeing, saying he was already seeing positive changes being made since becoming an advocate for educating people about mental health in the Fifo industry.

Mr Miller called on industry stakeholders as well as the broader Perth community to read the report, saying until more people learned mental health was an illness that people didn’t choose to get, but with help could recover from, that the industry would continue to suffer from a lack of compassion and understanding.

Dr Jacobs said the effect of Fifo work arrangements on people’s mental health required more research, but that did not mean recommendations should be put on hold until further data was collected.

“The extent of the problem must not be ignored and work must be undertaken now to mitigate the risks, rather than waiting" the report said.

The report can be viewed in full here