While lower returns on equity have flowed through to WA’s top earners this year, the river has hardly run dry for the top end of town. 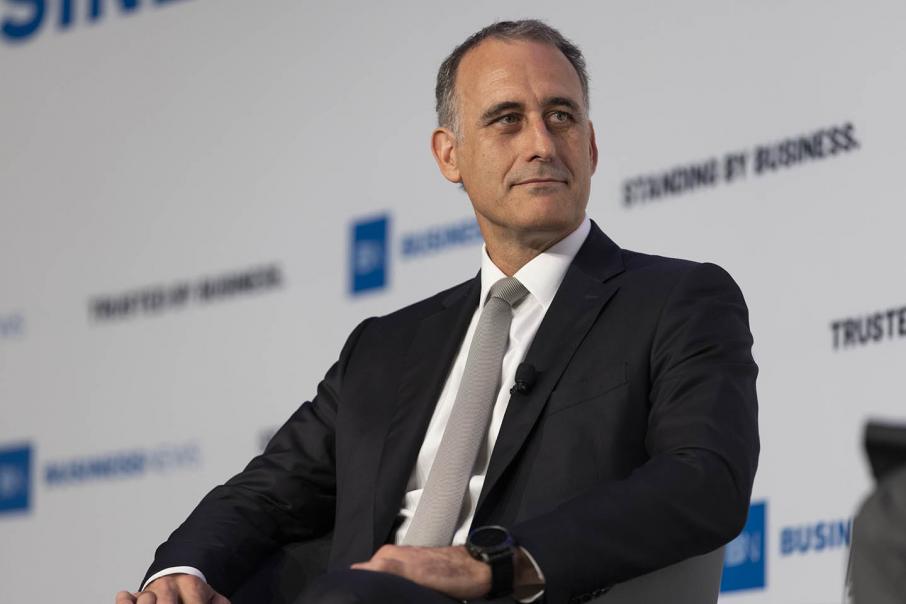 About 60 per cent of Rob Scott’s income was derived from equity payments. Photo: Matt Jelonek

Mark McGowan has reasonable claim to the title of most powerful person in Western Australia.

Having attracted unprecedented popular support at the March state election, his authority (locally) has been projected across Australia this year as he’s resisted mounting pressure from federal figures and business leaders to relax the state’s border restrictions.

However, the extent of that political power is hardly reflected in what he sees in his bank account every fortnight.

With a base salary of $350,000 and electoral allowance of $78,000, Mr McGowan’s remuneration appears modest when stacked up against the earnings of the top brass of WA’s business community.

In fact, when compared to the results of Business News’ latest annual executive salary survey, which found more than 100 of the state’s highest-paid earning total remuneration of $1 million or more, Mr McGowan’s income appears paltry.

To put his salary into context, annual remuneration of $430,000 is roughly comparable to Kerry Stokes’ fee as chair of Seven Group Holdings.

The reasons for the pay disparity are readily explainable.

Mr McGowan’s income, which is set by the state’s Salaries and Allowances Tribunal, is determined via rigorous assessment in full view of onlookers, with the primary considerations being public sector wages policy and the state’s financial position.

Executives, on the other hand, benefit from a byzantine array of income streams that often comprise a generous base salary, coupled with bonuses, equity-based payments, and an assortment of performance-based incentives.

In the case of Ryan Stokes, who has led Seven Group Holdings since 2010, just $1.6 million of what he earned in 2021 constituted his base salary.

That means about two-thirds of his income this year was performance tested, a greater percentage than in 2020 that helped boost his compensation by about $680,000 and made him one of the highest earners surveyed.

By contrast, Fortescue Metals Group managing director Elizabeth Gaines saw her pay roll back from $6.11 million to $4.76 million this year due to a decrease in equity payments.

Ms Gaines’ lower pay packet reflects a broader trend in this year’s survey, in which many of the state’s top earners derived smaller percentages of their income from performance-tested income streams than in 2020. 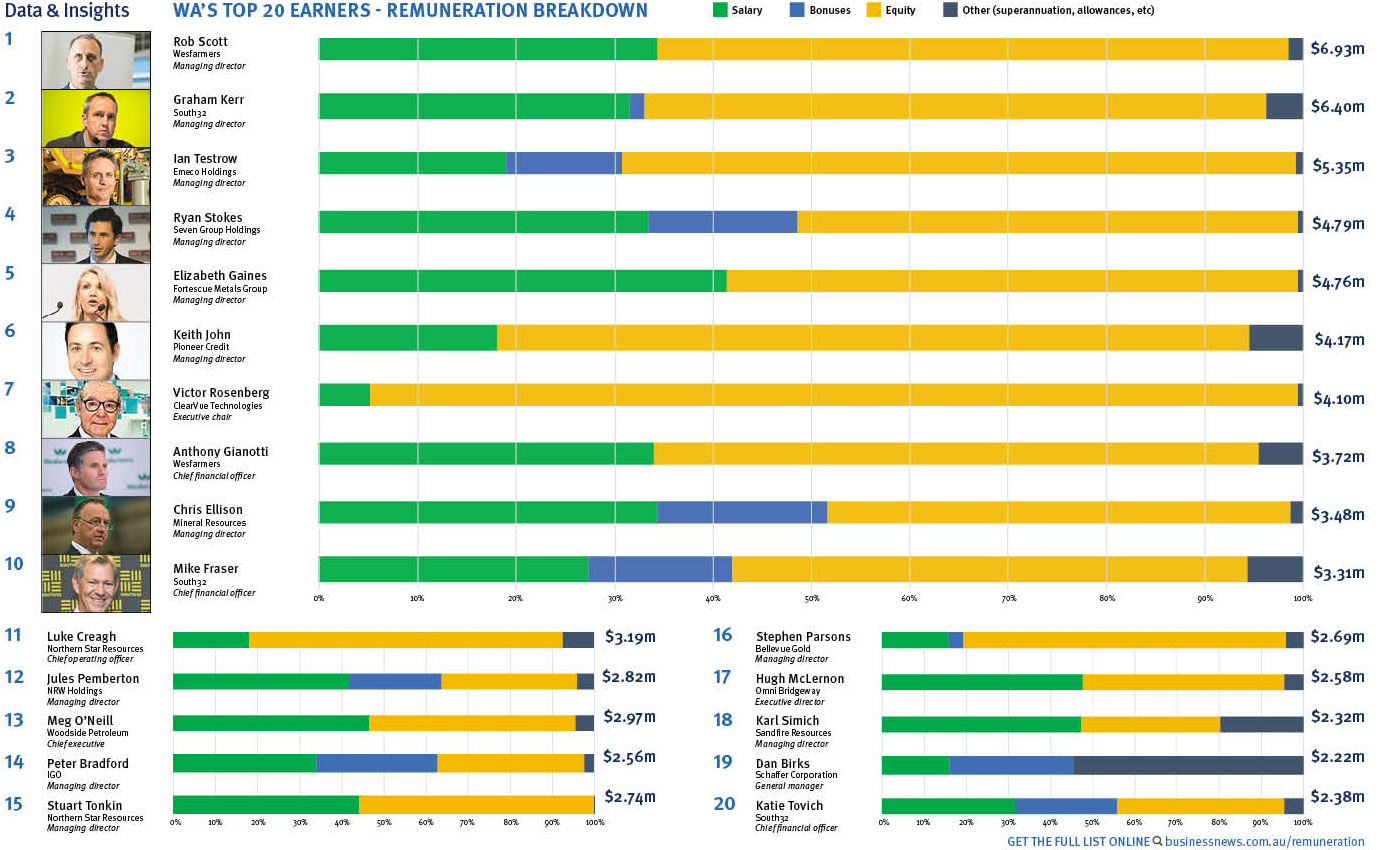 This was the case for Wesfarmers managing director Rob Scott, who this year’s survey pegs as WA’s highest-paid executive with $6.93 million.

That follows a stellar year for the retail conglomerate, with its share price peaking at a 10-year high of $65 in August.

Few shareholders could argue against the merits of Mr Scott’s income; as recently as 2020, the company faced dire prospects as restrictions shuttered distribution centres and retail outlets across Australia, leaving a question mark over the company’s future.

Having since beefed up its online platforms, retail buoyed the group’s results in the year to June, with profit growing to $2.38 billion.

That’s in part because a smaller proportion of his income was performance related this year. In 2020, $5.19 million was returned to Mr Scott in equity payments, as opposed to $4.33 million in 2021.

Anthony Gianotti, the group’s chief financial officer, also took home a smaller pay packet this year, with his income dropping from $4.31 million in 2020 to $3.72 million.

That was still enough to make him one of the highest-paid executives in the state, above the likes of newly minted managing directors at Woodside Petroleum and Northern Star Resources.

South32, like Wesfarmers, has enjoyed an impressive run in the past year, with its share price nearing a five-year high of $3.80 earlier this year.

That comes after the company moved to divest itself of carbon-emitting assets, such as its multi-million-dollar coal operations in South Africa, and deepen its investments in renewables, including via the purchase of a significant stake in a major copper project in Chile earlier this year.

Managing director Graham Kerr’s income, like that of Mr Scott, has shrunk this year, from $7.3 million in 2020 to $6.4 million.

While his base salary grew modestly, from $1.71 million to $1.77 million, a smaller percentage of his income is tied to his performance, with long-term incentives decreasing from $3.86 million to $2.75 million.

Mike Fraser and Katie Tovich, the company’s respective chief operations and financial officers, also came away with impressive sums, earning $3.31 million and $2.38 million, respectively, for their efforts this year.

They, like Mr Gianotti, are among the state’s 20 highest earners this year.

Both benefit from large base salaries, but, like Mr Kerr, are also significant beneficiaries of share-based payments, with about two-thirds of their respective incomes derived from these incentives.

In most cases, shares and options form the bulk of earnings for WA’s best-paid businesspeople, with nine of the state’s 10 highest-paid executives deriving more than half of their income from equity payments.

Ian Testrow, who leads mid-cap equipment hire outfit Emeco Holdings, is among the most notable beneficiaries of these arrangements, with a staggering 80 per cent of his $5.35 million income comprising long-term equity incentives this year.

That represents a significant decrease from 2020, when he earned nearly double that amount at $9.96 million, with 89 per cent of his income tied to performance-based incentives.

In the case of Victor Rosenberg, who has been executive chair of ClearVue Technologies since the mid-1990s, performance rights comprise $3.84 million of his $4.10 million income, paired with a base salary of just $210,000.

Despite many executives accruing smaller earnings this year on the back of lower returns on equity, the income of WA’s top earners still dwarfs that of many public figures of similar or greater profile.

Jeremy McGovern and Nat Fyfe, believed to be the two highest-paid AFL players in the state, are on respective annual salaries that average $1.2 million and $1.1 million.

When adjusting for performance-based incentives, which many elite athletes can also access, this would rank their base salary alongside the likes of Mr Testrow at Emeco Holdings.

Other figures, such as Michaelia Cash, who, as attorney general and industrial relations minister is the highest-ranking Western Australian in federal cabinet, earn as little as $330,000 for their work.

Kerry Stokes’ board fees are again a good benchmark, with Ms Cash’s earnings roughly comparable to his $290,000 fee as chair of Seven West Media.

Comparisons are even starker for the bottom end of town, where workers can expect real wage decreases this year and next, according to Treasury’s budget forecasts, before wages growth overtakes inflation in the middle of the 2020s.

That’s despite a tight labour market, low interest rates and low migration, which should, notionally, cause wages to increase.

While these numbers are useful for understanding the ‘statutory’ income of WA’s top earners, many companies also provide details on ‘actual’ pay.

Mr Ellison finished this year with statutory remuneration of $3.48 million, a decrease on his 2020 earnings of $4.36 million driven by a decrease in the value of his short- and long-term equity.

When considering vesting of his long-term incentives, his actual pay was $7.39 million, which was larger than his take-home pay of $3.7 million in 2020.

In contrast, Mr Kerr’s statutory pay this year of $6.4 million was enough to place him in second position on the Business News remuneration survey, despite his actual pay being only half of that at $3.6 million.

This means his actual pay grew this year, having plummeted to $3.2 million in 2020.

Other significant examples of this include Ms Gaines, whose actual pay of $5.69 million this year was higher than her statutory remuneration.

While company directors generally do not accrue remuneration as large as that of executives, many earned tidy sums this past year, with at least six found to have earned fees of at least $1 million for their work.

They include Mark Barnaba, whose $950,000 for being deputy chair of Fortescue Metals Group recognises his significant remit filling in for Andrew Forrest, and Richard Goyder, whose indicative remuneration of $1.3 million is likely to be much higher, given the AFL does not disclose remuneration for key personnel.

Gavin Rezos, who chairs Gina Rinehart-backed Vulcan Energy, was by far the biggest earner, picking up $1.5 million for his efforts.

The bulk of that came from his $1.28 million fee at Vulcan, which itself was derived from $1.17 million worth of share-based payments.

Another notable name is Tim Goyder, who earned $1.28 million as chair of three different companies. He’s set to step back from Chalice Mining, his most lucrative gig, which earned him $950,000 in the year to June.

Next year’s remuneration survey is likely to look far different, with Michael Anghie, chief executive of APM Human Services International, a sure thing for the list following the company’s long-hyped stock market float earlier this month.

His base salary, pegged at $2.1 million, would be the second highest in the state, with incentives worth anywhere between $3.15 million and $5.25 million likely to land him within the five highest-paid executives in WA.

Whether he hits the targets required to realise those incentives is another question, given the company’s shares have traded well below the offer price of $3.50 since listing at the start of November.

Significant shifts in the list’s ranking are also likely to follow movements at Northern Star Resources, where veteran director Michael Chaney has come in as chair, and Bill Beament and Raleigh Finlayson have exited following the Saracen Minerals mega merger.

Mr Chaney is already among the state’s highest-paid directors, receiving $830,000 per annum as chair of Wesfarmers.

With the addition of $575,000 he will accrue chairing Northern Star, Mr Chaney is likely to overtake Richard Goyder and become the state’s second-highest-paid non-executive director in next year’s survey.

Again, equity is likely to form the bulk of their riches in the years to come, with Mr Beament granted 140 million options exercisable at $0.15 each and Mr Finlayson granted 30 million performance rights to vest in three tranches.

One name that’s unlikely to trouble names at the top of the list is Ben Wyatt, who retired from politics in March and has rapidly become one of the state’s busiest non-executive directors.

Mr Wyatt’s fees from Woodside Petroleum and Rio Tinto are likely to total at least $415,000, based on previous financial reporting.

Beyond that, though, his positions on the boards of West Coast Eagles, Telethon Kids Institute and Perth Festival accrue no fees, while he appears to receive no financial compensation for his role as a strategic adviser to APM.

Curiously, Kerry Stokes’ recent resignation as chair of Seven Group Holdings is likely to drive his name further up next year’s survey.

While stepping back from the role he has held since 2008 will mean he loses the commensurate $390,000 fee, it will be more than made up for in his new position as strategic adviser, which will pay him a tidy fee of $475,000 per annum.