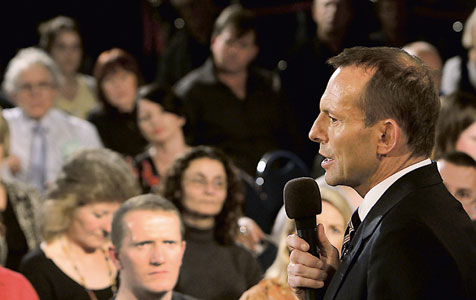 Opposition leader Tony Abbott says the coalition will contribute more than $600 million towards the $840 million Swan Valley Bypass project if it wins government at next month’s federal election.

The bypass road, which will form a section of the proposed Perth to Darwin highway, will stretch 40 kilometres between the intersection of Reid and Tonkin highways in Beechboro and the Great Northern Highway near Muchea.

Campaigning in the marginal seat of Hasluck over the weekend, Mr Abbott said the coalition would also match the Labor government’s $686 million commitment to the Gateway roads project in Perth’s north.

“The construction of the Swan Valley Bypass and the Perth Gateway will improve productivity, strengthen the Western Australian economy and create jobs,” Mr Abbott said.

“These roads will also tackle congestion so that people can spend less time in traffic and more time with family.”

The coalition’s $615 million commitment towards the Swan Valley Bypass exceeds the $418 million pledged by Labor in May’s federal budget but may come at a cost to other road projects.

Labor candidate for Perth Alannah MacTiernan claims Mr Abbott had taken money out of two existing projects funded in the federal budget, including the Tonkin Highway overpass project and works on Leach Highway and High Street.

“All he’s done is take $200 million out of road projects in Labor-held seats, and put them into a road project in a Liberal-held seat,” Ms MacTiernan told reporters.

“There’s not one cent of extra money.”

Ms MacTiernan said WA’s infrastructure needs would be neglected under a coalition government as Mr Abbott has refused to match the $500 million provided by Labor in the federal budget towards rail projects.

WA Treasurer Troy Buswell welcomed the coalition’s funding towards the Swan Valley Bypass, which he said would allow the project to be delivered without having to be staged.

“The state government plans to start work on this project in 2015, and given the project was reliant on federal funding, this commitment from the federal opposition means that should it win government, the future of this highway is assured,” Mr Buswell said.