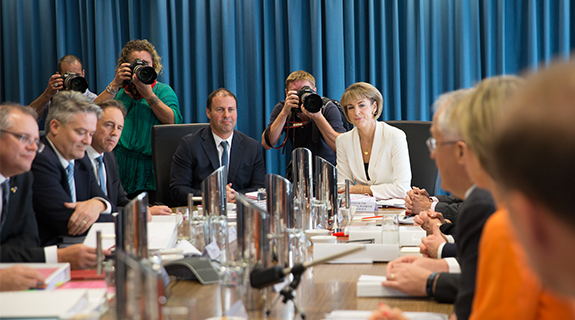 Pressure from environmental groups on farmers to stop access to their land would create long-term problems in terms of supply, price, and attracting industry,  Mr Frydenberg said.

About 40 per cent of gas supply in the eastern states was generated by unconventional means, predominantly from Queensland, he added, with unconventional extraction to be increasingly important for energy production.

Western Australia has large unconventional gas resources, particularly shale gas in the Canning Basin, but much of it has so far gone untapped while the focus has been on big offshore fields.

WA also has unconventional gas in the Perth Basin, and the Barnett government has supported fracking (hydraulic fracturing) in the area, saying it is a safe and well-established practice.

However, WA Labor is opposed to fracking.

Similarly, the Labor Party in the Northern Territory promised a fracking moratorium if it wins an upcoming election.

Mr Frydenberg said he hoped there would be a rethink of that policy.

Although rogue players had given the industry a bad name when it had first taken off, the minister said, he felt it would be an important part of his role to put facts on the table about unconventional drilling, particularly how it could coexist with the agricultural industry.

“Just the other day I was in part of Queensland, the Western Darling Downs, where I went and saw some of these coal seam gas wells, which could be half the size of a tennis court with the infrastructure around it, sitting side by side with cornfields or feedlots or other key forms of agriculture,” Mr Frydenberg said.

“You can have peaceful and effective and productive and beneficial co-existence between the developer of the resource as well as the owner of that particular land.”

In WA, one company that has explored use of unconventional drilling is Buru Energy, in the Kimberley.

Its shale gas extraction differs from the coal seam gas sourced in Queensland, however, because it is much deeper underground.

Mr Frydenberg said the government understood that Australia was a high-cost jurisdiction, but was trying to drive costs down.

He touched on the Australian Building & Construction Commission legislation, which will be considered in a special Senate sitting next week.

That would improve flexibility in the labour market and consequently productivity, he said.

Other changes to boost competitiveness were in taxation reform, infrastructure and free trade agreements.

Underpinning Australia’s strength as a foreign investment destination was the transparency and stability of the legal system, he added, which brought certainty for investors in large projects.