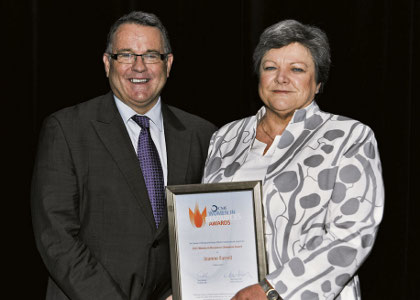 Rio Tinto Iron Ore executive Joanne Farrell has been named the Women in Resources Champion for 2012 by Western Australia’s Chamber of Minerals and Energy.

Others honoured today include Woodside Energy’s Katrina Bukauskas, who was honoured as the Outstanding Young Professional for 2012; BHP Billiton Nickel West’s Margaret Watroba, who was named 2012 Outstanding Professional; and NM Cann’s Natasha Cann, who took out the technician/operator/trade category.

Other winners included Fortescue Metals Group’s Danielle Bancroft, who won the People’s Choice award, while Newmont Boddington Gold was recognised for its initiative to employ local women looking for work between the hours of morning tea and lunch breaks.

“Our winners are fantastic examples to women considering a career in the resources sector and those already working within it,” Mr Howard-Smith said.

CME research shows 22 per cent of the total mining workforce is now women, up from 18 per cent five years ago.

Across all industries, the female participation rate comes in at 42 per cent.

“Women are increasingly choosing a career in the resources sector because it provides potential for career advancement, great pay, global travel and a work-life balance,” Mr Howard-Smith said.