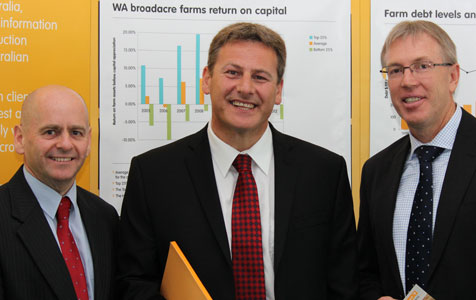 Western Australian broadacre farmers only averaged a “fairly miserly” 1.07 per cent return on capital for their 2012 harvests due to variability in grain prices, low rainfall, higher costs and lower yields.

The results from the Planfarm Bankwest benchmarks survey, which looks at more than 500 WA broadacre farm businesses and is considered the most comprehensive annual farm performance survey showed there were big differences between the top 25 per cent performing farmers and the bottom 25 per cent.

Planfarm consultant Graeme McConnell said the 2012 return on capital was below expectations and fairly miserly, but for the top 25 per cent of broadacre farmers they had an average 2012 ROC of 5.26 per cent.

“I actually think there are a couple of really good positives out of this,” Mr McConnell said.

“The average yields that we’ve got out of that sort of rainfall has been quite remarkable, so I think the ability of our farmers is fantastic to generate results they have out of this sort of event especially in a high cost year.”

Mr McConnell said the key to operating profitably as a broadacre farmer in WA was capitalising on good years, which were most recently in 2011 and 2008.

“The long-term data is starting to have more and more relevance as we go through. The average top 25 per cent of farmers are achieving about 8 per cent (over the last six years) and the average are sitting at about 4 per cent and the bottom 25 per cent aren’t making any money,”Mr McConnell said.