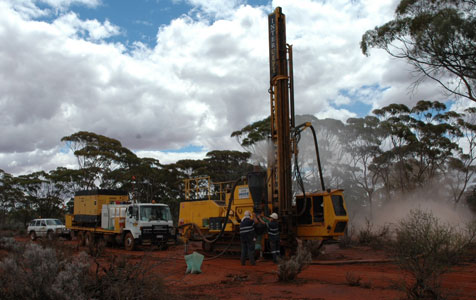 Exploration drilling at Steeple Hill, around 110 kilometres east of Kalgoorlie-Boulder.

Diversified explorer FairStar Resources has secured $260 million in project finance, which will cover 80 per cent of the development cost of its Steeple Hill iron project in the eastern Goldfields.

The joint venture has also secured a $US640 million line of credit for additional funding if it is required, FairStar said.

The line of credit is well above the $US320 million required to take the Steeple Hill project to production.

Today's announced agreement remains conditional on FairStar securing the remaining 20 per cent of project finance and execution of a formal joint venture arrangement.

FairStar said it was in advanced negotiations with four separate parties regarding the remaining 20 per cent in finance, as well as an offtake agreement covering up to 80 per cent of the first 20 million tonnes of production from the mine.

Mr Robertson said the company had evaluated a range of funding proposals and the Alliance Super Holdings transaction represented the best outcome for shareholders.

“This agreement means the company can retire debt and will emerge debt free, while the 50-50 profit sharing joint venture will have significant funding at its disposal well and above that required to transition Steeple Hill into production,” he said in a statement.