FairStar Resources has cancelled its $260 million joint venture which would have provided 80 per cent of the required funding for its Steeple Hill iron ore mine in the eastern Goldfields, while at the same time announcing an alternative deal that will pay for the project's rail infrastructure. 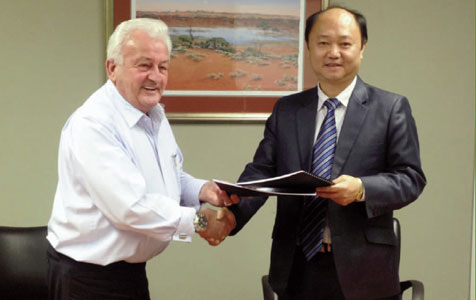 FairStar Resources has cancelled its $260 million joint venture, which would have provided 80 per cent of the required funding for its Steeple Hill iron ore mine in the eastern Goldfields, while at the same time announcing an alternative deal that will pay for the project's rail infrastructure.

The Perth-based exploration company said the joint venture with Alliance Super Holdings, which would have resulted in a 50:50 profit sharing arrangement, was not in the best interests of shareholders long term.

FairStar shares emerged from a trading halt yesterday and gained 85 per cent to finish at 1.3 cents, but fell back 23 per cent today to close trade at 1 cent.

FairStar also announced, however, a $US176 million vendor financing arrangement with Chinese state-owned infrastructure group CSR Ziyang Co, which would cover the cost of rail infrastructure for the Steeple Hill project.

Managing director Kevin Robertson said efforts to secure a comprehensive funding package for Steeple Hill had failed, so the company had decided to split its funding needs across a number of interested parties.

Mr Robertson said this would make it easier to obtain finance in the current tight international debt and equity markets.

The agreement with CSR Ziyang is a significant step forward for the Steeple Hill project, with funds provided in three tranches; the first to pay for three locomotives and 132 wagons, which would be able to transport 1.8 million tonnes of direct shipping ore per year.

FairStar says the trains and associated infrastructure would cost around $US106 million.

Additional locomotives and wagons will also be purchased through CSR Ziyang once Steeple Hill begins production, in order to increase transport capacity to 5mt per year.

Commercial terms of the agreement include a 15 per cent deposit payable by Fairstar to commence manufacture of the trains, and a five year repayment term with a two year holiday.

FairStar is still seeking funding to pay for processing infrastructure at Steeple Hill and has signed Singapore-based financial and consulting practice Creafin & Associates to assist in that regard.

Mr Robertson said FairStar was also in discussions with a range of potential financiers, while Creafin & Associates managing director Patrick Teo was in negotiations with several European asset managers regarding a potential project finance deal.

Mr Robertson said today that FairStar was very pleased to gain the support of CSR Ziyang.

“This is a historic day for FairStar as we believe we have secured a good financial structure for the company,” he said.

“The agreement with CSR Ziyang fulfils not only our first stage rolling stock requirements but also the additional required rail infrastructure for the project.”