Some of the prominent Perth businesswomen who are succeeding in male-dominated industries outline the strategies that have worked for them. 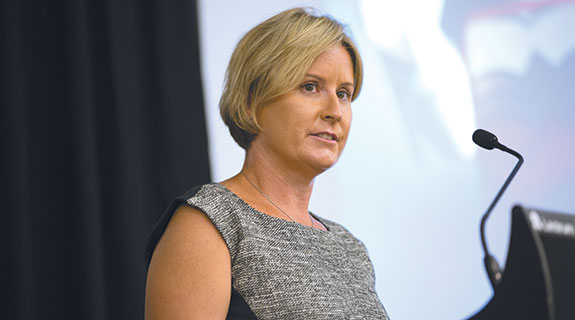 LEADER: Sharon Warburton is on the board of FMG and Brookfield Multiplex. All four women (featured below) are on boards at Curtin University. Photo: Attila Csaszar

Some of the prominent Perth businesswomen who are succeeding in male-dominated industries outline the strategies that have worked for them.

Sharon Warburton has been around big business long enough to remember when gender diversity and pay disparity were taboo topics, when male colleagues openly questioned the value of a woman’s opinion in the workplace

Last week, the executive director strategy and finance at construction group Brookfield Multiplex and non-executive director at miner Fortescue Metals Group commanded the attention of about 160 people at an American Chamber of Commerce in Australia Women in Leadership event.

Presenting her six tips for women looking to get ahead in their careers, the 2014 Telstra Business Women’s Award winner expressed gratitude for, and stressed the importance of, having good mentors (both male and female).

“Mentoring is invaluable to helping women find the courage to dig deep when times are tough,” she said.

Ms Warburton, who has never had a female boss, said construction and mining industries had evolved from the ‘blokey’ environments they once were.

While they still could be tough places for women to work, she said it was improving as companies took precautions against unconscious bias, encouraged diversity, and aimed to close the pay gap.

The total remuneration gender pay gap for women in mining is 17.2 per cent on average less than their male counterparts, while the pay for women in construction is 25.4 per cent less than male colleagues.

A finalist in this year’s Chamber of Minerals and Energy of Western Australia Women in Resources Awards, Alliance Mining Commodities general manager corporate Bronwyn Barnes said her achievements in the mining industry had come from taking calculated risks.

“Embracing the fear and recognising that it’s a good thing has been a large part of my success,” Ms Barnes said.

While many support organisations have sprung up for women in resources – such as Women in Mining and Resources WA, Diversity Network and Women in Oil and Gas – it was a different story just a decade ago.

Chartered accountant Amanda Cox told Business News she was the only female in her role at any AFL club when she became chief financial officer at West Coast Eagles 10 years ago.

Only recently has another woman taken the same role, at the Geelong Cats.

GOAL: Amanda Cox is the chief financial officer of the West Coast Eagles.

Ms Cox said the club had supported her development, including sending her to Harvard for a management course, which had helped her hone her natural attitude to look for improvements and add value to the company.

“I’ve basically grown the role over the 10 years and so I’m responsible for finance (as well as), risk management, compliance and governance, human resources and payroll, (and) health and safety administration facilities,” she said. Women in the financial and insurance services hold only 37.3 per cent of the managerial positions and earn on average 36.1 per cent less than male colleagues.

She advised other women to be proactive about pursuing development and ask for better remuneration.

“The amount of times I tell women not to leave anything to chance … if you think you’ve done a good job, ask; if you don’t ask, you won’t get,” Ms Carver said.