Average investors are kept in the dark in terms of the real costs associated with mining operations. 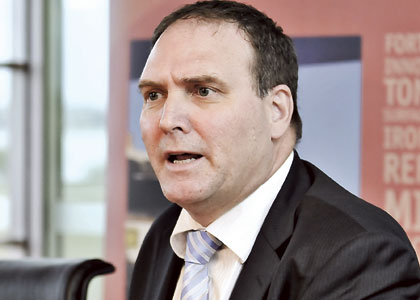 STATING THE OBVIOUS: Nev Power says the agreement reached by FMG has enabled the miner to reduce the overall cost of its debt. Photo: Grant Currall

Average investors are kept in the dark in terms of the real costs associated with mining operations.

AUSTRALIA’S corporate cops generally do a good job ensuring that investors in mining companies get accurate technical information; the recent troubles of Fortescue Metals Group have exposed a glaring weakness in relation to financial information, however.

Hidden from public view during the FMG share-price collapse, and still hidden, are two simple, but absolutely critical numbers: how much does it really cost FMG to produce a tonne of iron ore; and how much is it really paid for a tonne of ore.

The important word, whether talking about the cost of production and sale price is ‘real’, because these ‘real’ numbers allow investors to know whether FMG is trading profitably or not.

Unfortunately, all that investors get to see are the largely useless numbers of ‘C1 cash cost’ and the ‘Platts 62 per cent’ index for the price of iron ore – neither of which could be called ‘real’ when trying to estimate FMG’s profits.

The problem, and it applies to all iron ore miners, is that the C1 cash cost does not include non-cash items, one-off items, or financing charges.

For FMG, which is carrying around $10 billion in debt, and just took on an extra $1 billion, those additional charges are substantial, but only specified in the company’s quarterly and annual reports, and even then are available only after some digging.

Analysts at some of the bigger stock broking firms try to calculate the real costs being incurred by each iron ore producer, and even if close to the mark they are outsiders having a best guess; and even then, that guess is only available to the broker’s best clients, which is hardly what can be called a fully-informed market.

As for the price received, the Platts 62 per cent index or other measuring tools such as The Steel Index 62 per cent Index, or the Metal Bulletin Index, do not reflect what FMG (or any other miner) is actually being paid per tonne of ore.

All indices merely provide a yardstick for a hypothetical tonne of ore assaying 62 per cent iron and containing the minimum amount of impurities such as phosphorous, silica and alumina. Few Australian iron ore mines achieve that 62 per cent standard.

In FMG’s case, ore in its Chichester Hub averages 58.3 per cent iron – and the first discount on that Platts 62 per cent index can be seen because ore grading 58.3 per cent iron will not receive the $US110/t (or whatever the prevailing index price) because it contains 3.7 per cent less iron.

The next price cut could come from the impurities in Chichester ore, which are 5.08 per cent silica, 2.24 per cent alumina, and 0.052 per cent phosphorous.

Those elements in iron ore have to be removed in the steel-making process, with phosphorous the biggest problem because it can cause steel to turn brittle; and while 0.052 per cent looks to be a very small number, it is extremely important.

A glimpse into what this boils down to can be found on the third page of FMG’s June quarter report (not the front page) where it is revealed that the 62 per cent index for that period was $US141/t but the price FMG received was $US125/t.

The point of dragging readers through the mysterious world of iron ore costs and pricing is to demonstrate that what you see is not always what you get.

For the average investor this is an utterly hopeless situation because he or she is being tempted to buy the shares of an iron ore miner without really understanding the basics of the company’s production cost and sales price.

The best way to demonstrate that point is to ask why management at FMG sacked 1,000 workers, sold valuable infrastructure assets, and made dramatic changes to the company’s financial structure when it appeared to be in good shape on the C1 cash cost basis as reported on July 17 for the June quarter.

On that day, FMG announced the production of 17.8 million tonnes of ore for the June quarter at a C1 cost of $US46.04. The average CFR sales price was reported as $US125 per dry tonne.

Those numbers might encourage an investor to believe that FMG’s profit margin in the June quarter was $US78.96/t.

But if the profit was that good, and even if the iron ore price did fall in July and August, why did the company hit the panic button just 58 days after lodging its glowing June quarter report?

It appears that when the iron ore price fell below $US90/t in September it came alarmingly close to FMG’s real cost – not that investors knew what that number was then.

And they still do not know.

AT precisely the same time FMG was enduring its latest financial crisis, the people who administer the technical side of mining company reports were fine-tuning their procedures.

JORC, the acronym for the Australasian Joint Ore Reserves Committee, released on September 18 an exposure draft as part of a process updating the JORC code – the geologists’ bible when it comes to reporting what’s in the ground.

At FMG on the same day, the company was announcing its financial rescue package.

JORC fiercely enforces its rules on the key tests of transparency, materiality and competence.

Take transparency as a guide because JORC insists that: “The reader of a public report is provided with sufficient information, the presentation of which is clear and unambiguous, to understand the report and not be misled either intentionally or by omission”.

The same cannot be said of the nonsense that is the habit of miners reporting C1 cash costs and not the real cost of producing a tonne of ore, or an ounce of metal.

AS for some of the strange things said during the FMG crisis, this one from the company’s chief executive, Neville Power, to The Australian Financial Review newspaper is hard to beat as a statement of the bleeding obvious: “This agreement significantly reduces the overall cost of debt for the company, reflecting Fortescue’s continued commitment to profitability” – to which might be added that it would indeed be an odd company committed to making a loss.

“Truth always lags behind, limping along on the arm of time. ”
Baltasar Gracian (in 1647)