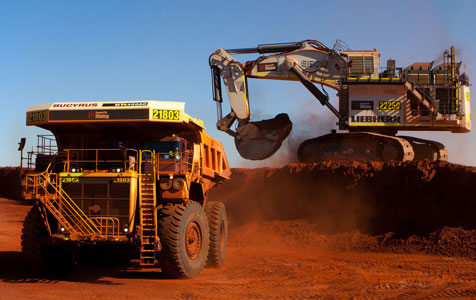 Downer EDI’s contract for work at Christmas Creek expires at the end of September.

Fortescue Metals Group plans to move to a full owner-operator model at its Christmas Creek mining operations after Downer EDI's contract expires at the end of September.

The winner from that move was Downer, which has handled all mining operations at Christmas Creek since early 2015.

Downer is currently ranked as the largest contractor miner in Western Australia, according to the BNiQ search engine.

The move to an owner-operator model at Christmas Creek means the only major contract miner still active at FMG's mines with be CIMIC Group subsidiary Thiess, which handles operations at the Firetail and Kings deposits at the Solomon hub.

FMG said today a comprehensive change management plan had been developed, which would allow for the safe and orderly changeover of Downer's operations, with no impact on production.

"The Downer team have been involved with mining at Christmas Creek since the outset and have played an important role in Fortescue's development of our world-class facilities in the Chichester Hub," Mr Power said.

"Adoption of an owner-operator model will further reduce Fortescue's costs through ongoing improvement of the efficiency and productivity of our Christmas Creek mining operations.''

Downer won its first FMG contract in June 2006, when FMG was gearing up to start its first iron ore mine in the Pilbara.

Under an alliance contract, it was given responsibility for everything from mine planning and engineering to site establishment and ongoing production, at both the Cloudbreak and Christmas Creek mines.

That changed 18 months later, when FMG terminated the mining alliance, leaving itself in charge of mining at its first mine site, at Cloudbreak.

The value of that contract increased after Downer took over Macmahon's share of the work.

While Thiess continues to work at Solomon, the scope of its activity was reduced in 2014 when FMG took control of the ore processing and train load-out facilities.

That purchase came after two fatalities at the mine in less than five months, prompting FMG to exercise powers to step-in and manage the two procesing facilities to address its 'operational concerns'.