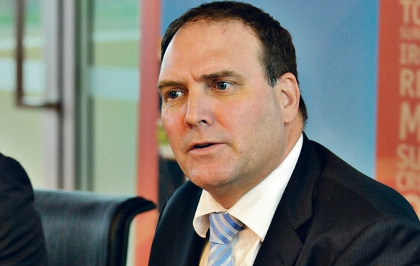 Fortescue Metals Group has resolved its short-term funding problems after securing the backing of global banking groups Credit Suisse and JP Morgan for a new US$4.5 billion credit facility.

The fully-underwritten facility, with global banks Credit Suisse and JP Morgan, will be used to refinance all existing bank loans and means the earliest repayment date for any of the company’s debt is now November 2015.

Fortescue chief executive Nev Power told a conference call this morning that the new facility was like using a “sledgehammer to crush an ant”.

“We wanted to do that to provide absolute certainty about the state of our finances and our balance sheet,” he said.

In other good news for FMG the overnight price for Chinese imported iron ore fines (62 per cent FE) was up to more than $US105.

Mr Power said the new facility, together with previously announced measures, “will continue to build on Fortescue’s profitability, liquidity and above all, removes uncertainty around our financing arrangements”.

The previously announced measures included deferring $1.6 billion of capital spending, cutting about 1,000 staff and contractor positions and selling a power station at its Solomon mining project.

Chief financial officer Stephen Pearce said the interest rate on the new instruments would be set by the market. However he expected the rate would be lower than the circa-seven per cent at which Fortescue's unsecured bonds currently trade.

The company said it had also received “strong interest” from a range of parties interested in acquiring some of its assets.

Mr Power told the conference call the assets could include its magnetite projects as well as “future operations and infrastructure assets” but declined to offer any specifics.

The company added in a statement that asset sales are not required under its new debt facilities and will only be pursued if they clearly add shareholder value.

Today’s announcement followed a sharp decline in Fortescue’s share price last week, and the placing of its shares in a trading halt.

The company’s full statement is pasted below:

Fortescue Metals Group announced today that it has secured an underwritten commitment for a Senior Secured Credit Facility of up to US$4.5 billion (“the Facility”) by two of the world’s leading banks, Credit Suisse and JP Morgan.

The Facility will be used to refinance all existing bank facilities and provide Fortescue with additional liquidity.

Fortescue had initiated discussions to restructure its bank facilities and remove earnings based covenants well in advance of the next review in December 2012.

"Fortescue took decisive action to secure a facility that underwrites our liquidity and maximises flexibility. This action, together with our previously announced measures, will continue to build on Fortescue’s profitability, liquidity and above all, removes uncertainty around our financing arrangements,” said Nev Power, CEO of Fortescue Metals Group.

In addition, strong interest has been expressed to Fortescue by a range of parties interested in partnering with Fortescue in certain of its assets. Fortescue is currently evaluating these approaches. Transactions of this nature are not required under Fortescue's new debt facilities and will only be pursued if they clearly add shareholder value.

“These new measures, together with additional operating cashflow generated from near-term volume increases at Christmas Creek and low cost tonnes from Solomon, will place Fortescue in a strengthened position toward our long-term production goals,” Mr Power concluded.