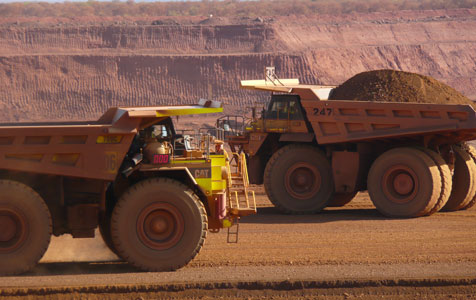 Shares in Fortescue Metals Group lifted today after it reported an 11 per cent cut in production costs, noting low iron ore prices were being influenced by large amounts of futures market trading.

Chief executive Nev Power said the high amount of trading on the futures market wasn’t manipulative, but was being driven by financial speculators and investors not iron ore industry players.

“I think the key that’s influencing the market now is driven by sentiment and that’s the very high level of trades on the futures market which are actually not so much by industry participants, but by speculators in the market,” he said.

He said the iron ore market was in balance, as evidenced by higher cost producers dropping out and others drawing from stockpiles, which had traditionally led to an increase in the price of iron ore.

“I think we’re seeing the market price now driven by that level of speculation rather than by supply demand balance," Mr Power said.

In the December quarter, FMG lowered its cost of iron ore delivered to customers from $US45 a tonne to $US41/t.

It achieved an average price of $US63/t, about 84 per cent of the average 62 per cent Platts index.

During the December quarter, the 62 per cent Platts index averaged $US74 per dry metric tonne, compared with $US90/dmt in the September quarter.

Mr Power shied away from naming its breakeven costs, which analysts have speculated is around $US56/t, noting variables such as the falling oil price and exchange rate moved too quickly to provide a single number.

While other miners have also saved costs on freight, FMG has not benefitted as much due to longer-term shipping contracts.

During the December quarter, FMG processed 36.7mt of ore, down 6 per cent on the September quarter.

It shipped 41.1mt, which was down 1 per cent from the September quarter.

As part of ongoing cost reductions, FMG set a new lower guidance target of $US35/t in the second half of the financial year.

It has also repaid $US500 million in the quarter to reduce total debt to $US9.1 billion and halved its capital expenditure guidance to $US650 million for the year.

Its next debt repayment is not due until April 2017 and it needs to repay $US2 billion worth of debt to hit its debt gearing ratio of 40 per cent.

Mr Power flagged further operational efficiencies at its Pilbara mine sites, saying it was committed to making long-term sustainable decisions that drove down costs.

Its fifth shipping berth at Port Hedland and its gas pipeline, which will allow it to save on fuel costs through the conversion of its 50MW Solomon gas power station to gas from diesel, are both due for completion in the March quarter.

While the fifth berth will increase FMG’s shipping capacity by 20mt per annum, Mr Power said the company would need to address bottlenecks at its rail and processing facilities, currently both running at maximum capacity before it could increase its production and shipping targets.

It maintained its production and shipping guidance for the full 2015 financial year at 155mt-160mt.

It also maintained a price guidance of between 85-90 per cent of the Platts 62 per cent index price.