FMG finances to be ‘strong as an ox’: Forrest 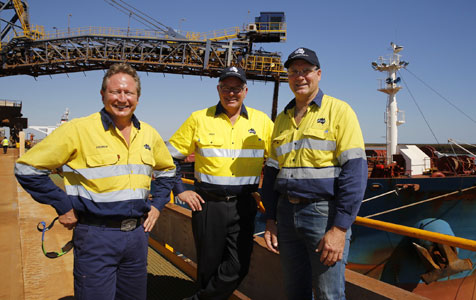 Fortescue Metals Group has vowed to focus on reducing its debt by 30 or 40 per cent following the official completion of its $US2.4 billion port expansion at Port Hedland.

The company opened its fourth export berth at Port Hedland today, lifting its port capacity to 155 million tonnes per year.

Upon completion of its 40mtpa Kings mine development later this year, FMG will have completed its ambitious $US9 billion expansion program, and is planning to pause at that level.

“I think we will settle down 155, pay down debt, get the balance sheet as strong as an ox, and then we can answer questions like that,” chairman Andrew Forrest told journalists at the port when asked about future growth targets.

“The company has a great deal of options and its shoring up its balance sheet beautifully now.

“It would mean we’ve built up our equity base very markedly, and that’s in train right now.”

Mr Forrest would not be drawn on whether FMG planned to proceed with the sale of a minority stake in its railway arm, The Pilbara Infrastructure.

There has been growing speculation that FMG will shelve the proposed sale, after benefiting from a recovery in the iron ore price and the lower Australian dollar.

Managing director Nev Power said the company was confident Port Hedland would be able to accommodate its current and future export volumes.

“We don’t see any immediate capacity constraints here at the port,” he said.

“Our guaranteed capacity is 120mt and we can access the ‘class D’ capacity to expand our production above that.

“At the moment, 155mt is not a challenge and we see ability for the port to go well beyond its model capacity.”

The fourth berth was named the Nick Sexton Berth, in honour of an FMG staff member who passed away earlier this year.

* Mark Beyer travelled to Port Hedland as a guest of FMG.