Fortescue Metals Group has called for the phasing out of the state government’s contentious domestic gas reservation policy, which has traditionally been backed by big gas buyers, in favour of stricter application of the ‘use it or lose it’ rules. 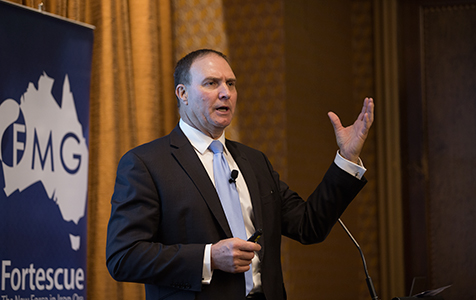 Fortescue Metals Group has called for the phasing out of the state government’s contentious domestic gas reservation policy, which has traditionally been backed by big gas buyers, in favour of stricter application of the ‘use it or lose it’ rules.

A Deloitte Access Economics report commissioned by FMG said there would be a big fall in wholesale gas prices if the proposed policy changes were implemented.

“We see potential to unlock a three to four dollars a gigajoule reduction in gas prices,” FMG chief executive Nev Power told a briefing this morning

“For us, this is all about ensuring there is certainty of (gas) supply in the future, and what we want to generate that supply is market conditions to prevail.

“So if it’s not economic for the larger gas producers to develop these deposits and supply the domestic gas market, let them focus on LNG and let the rest of the market determine when its economic to develop domestic gas supply.”

Mr Power said this change would mean local supply costs, and not a linkage to LNG export prices, would determine gas prices in the domestic market.

He said the linkage to LNG export prices – the so-called ‘netback price’ – was an unintended consequence of the domgas policy, which requires 15 per cent of LNG production to be reserved for domestic customers.

FMG’s reform proposal is a marked departure from the stance of the DomGas Alliance, which represents gas buyers including Alcoa of Australia and FMG.

“Domestic reservation policy has worked in bringing gas into the domestic market in Western Australia that otherwise would have been lost to the State. This remains the case."

The Alliance endorsed the findings on tightening the retention lease systen.

"It has long been accepted that our retention lease system allows LNG exporters to warehouse fields which could and should be directed to the domestic market,"
Mr Brown said.

"This report highlights the weakness of our retention lease system in comparison to other nations."

“Retention leases are not granted or renewed automatically and governments have an interest (in the form of taxation revenue and job creation) in accelerating the development of Australia’s gas resources," he said.

“The system requires titleholders to maintain an active commitment in the relevant area, undertaking an agreed program of activities which would address the barriers to commercialisation for the duration of the title.

“Importantly, the system also recognises that oil and gas companies incur significant costs up-front in exploration, which is a high commercial risk activity with no guarantee of success."

The Deloitte report indicated that gas prices would fall from $10-$12 per gigajoule to around $7.20/GJ if the policy proposals were adopted.

The latter figure was derived from the estimated cost of supplying gas from Apache Energy’s recently developed Devil Creek plant, which was built specifically for the domestic market.

Deloitte said it studied the cost of developing two unnamed gas fields for the domestic market.

It estimated these projects would need to charge as little as $4.30/GJ and $5.80/GJ in order to achieve an acceptable rate of return.

Mr Power said he wanted the Deloitte report to be a conversation starter.

He said the same policy approach had been applied to Pilbara iron ore tenements and resulted in a win-win outcome.

“It was only the enforcement of the ‘use it or lose it’ policy’ that allowed us to get a big enough footprint to start our business,” Mr Power said.

“We haven’t stopped or displaced anybody else from developing their iron ore business.”

Deloitte partner Chris Richardson said the forecast reduction in gas prices would result in 2,100 extra jobs and a $2.5 billion per year boost to Gross State Product by 2020.

The Deloitte report said there were currently 35 gas retention leases in WA, with a further five held under state waters.

It said the process for renewing the leases was not transparent.

The leases are held by companies including Woodside Petroleum, Chevron, Apache, GDF Suez and Santos.

Gas producers have previously argued that they need to retain leases to support their long-term planning and future production plans.