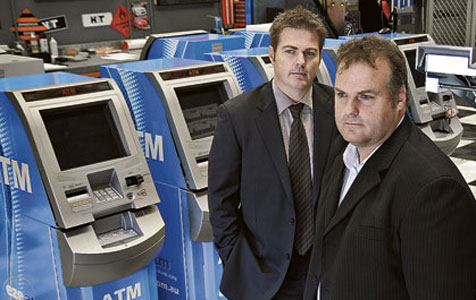 West Perth company Ezeatm has announced an earning downgrade one week after sacking company founder and chief executive Todd Zani, who has allegedly responded by requesting a shareholder meeting to remove the remaining three directors.

The directors Todd Zani has requested be removed include his brother and co-founder of the company Chad Zani, alongside director Mark Jones and newcomer Douglas Rose, who was appointed in March this year.

In the earning downgrade it was announced by Ezeatm that Todd Zani had also ceased to be a director of the company.

However Mr Todd Zani has cast doubt over the validity of the announcementsreleased by Ezeatm, issuing a statment late last night. See below.

In the announcement today ATM distributor Ezeatm downgraded its expected earnings to between $1.5 million and $1.7 million.

In a statement Ezeatm said the reduction was due to the deployment of machines into unprofitable locations and a significant increase in overhead costs.

Ezeatm also listed an additional factor in the reduction was a $256,000 act of fraud committed by an employee of a third party cash bailment contractor the company used.

The company has said it is assessing its legal options in regards to the fraud act.

In response to the earnings reduction, Ezeatm’s board have commissioned a strategic review from KPMG, with Robert Kelly, a former partner of KPMG, appointed as interim financial officer.

Ezeatm distributes ATMs in Australia and Asia and its stock last traded at 33 cents.

It previously reported a net loss of $1.9 million for the half year period ending December last year.

The ASX announcement issued by Ezeatm on 11 June 2013 titled "Ezeatm earnings guidance and market update" claims that the Directors of the Company resolved to removed Mr Todd Zani as a Director of the Company. Todd Zani has neither resigned as a Director nor has been removed by any vote of shareholders. The ASIC publication entitled "Removal of directors of public companies" sets out that only shareholders of a public company (and not directors) can remove a fellow director. Todd's view is that the resolution that purported to remove him as a director of the Company is void pursuant to section 203E of the Corporations Act 2001. This afternoon Todd Zani formally requested that the Company retract its statement to the ASX that he is no longer a Director of Ezeatm and advise ASIC accordingly.

Furthermore, a second announcement to the ASX also dated 11 June and titled "Section 203D Requisition" is also misleading. This announcement contains an inference that Todd Zani has requisitioned a meeting of the Company's shareholders. This is not correct. At the current time Todd is considering the various legal options available to him as a major shareholder to seek resolution of a number of issues involving the company and the Board, but has not formally or informally called for a meeting of the Company's shareholders.