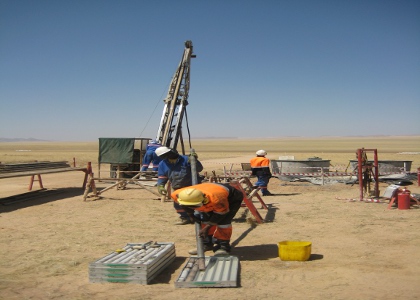 TAKEOVER BID: CGNPC is trying to gain access to the Husab project, one of the world's richest uranium deposits.

China’s Taurus Mineral, an entity owned by CGNPC Uranium Resources Co and The China-Africa Development Fund, last night confirmed it will make a takeover offer of 243.55 pence (A$3.74) per Kalahari share.

Kalahari holds a 42.75 per cent stake in Extract Resources, which owns one of the world’s largest uranium deposits at the Husab project in Namibia.

If Taurus acquires more than 50 per cent of Kalahari shares it will make a downstream cash offer of $8.65 per share for Extract Resources, valuing Extract at $2.18 billion.

CGNPC and Kalahari announced in March a possible recommended takeover offer, pitched at 290 pence; however the proposal did not proceed, following the Fukushima nuclear disaster, which lead to a collapse in uranium prices.

Extract has advised shareholder take no further action and await guidance from the company’s independent directors.

Extract CEO Jonathan Leslie said the independent directors were working carefully to assess the details of the proposed offer and will consider all available alternatives for maximising shareholder value.

“Since the initial announcement of talks between Kalahari and CGNPC, we have sought to ensure that Extract shareholders would be protected if an offer was to be made for Kalahari," Mr Leslie said.

"Therefore, we are pleased that ASIC has now confirmed that all Extract shareholders will have an opportunity to consider a downstream offer on equivalent terms to shareholders in Kalahari.

“While the Board is yet to opine on this offer, we believe that the interest from CGNPC clearly demonstrates the strategic nature of Husab as a Tier 1 asset as well as confidence in the long-term fundamentals of the uranium industry.”

The company is being advised by Rothschild and Clayton Utz.

Extract recently received a mining license for the Husab project from the Namibian government, and said it is in continuing talks with a number of potential investors over the project.