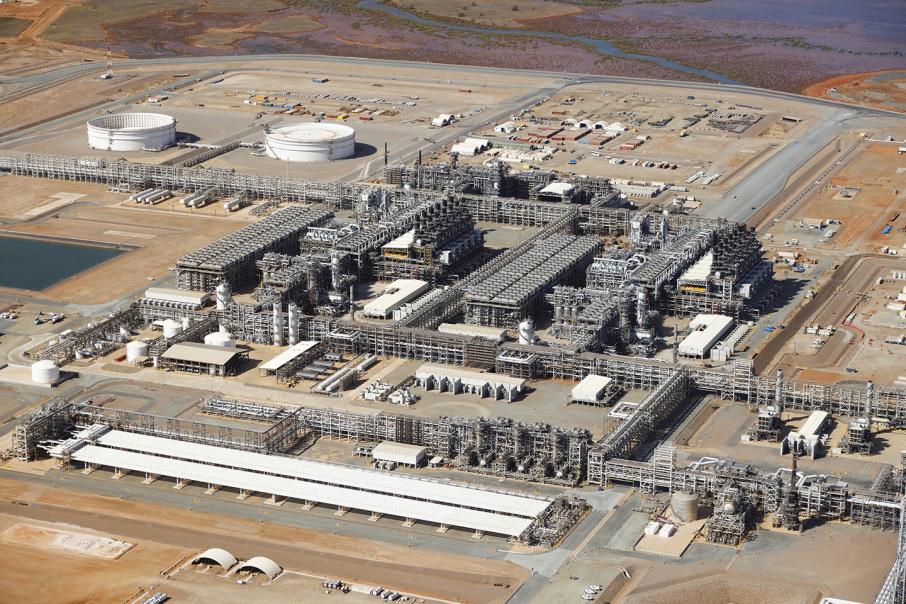 Western Australia’s ten biggest export operators are pumping out about $113.6 billion of overseas sales annually between them, according to the latest BNiQ Search Engine data.

That represents an 18 per cent jump on the 2017 figure of $96 billion, driven by production ramp-ups, improving prices, and in one case, a major change in accounting policy.

This year’s total includes about $64 billion of outbound trade by the four biggest iron ore miners, and $18.7 billion by the top two oil and gas exporters (see list below).

Those numbers compare with $60 billion among the big four iron ore players and about $18.4 billion for oil and gas producers in the 2017 list.

The list is ranked by operator, and all revenue is attributed to the business in control of day to day operations.

Top-placed Rio Tinto reported $US18.1 billion ($23.6 billion) of revenue from Pilbara iron ore sales in the 2017 calendar year, with the company selling 271 million tonnes of the steel-making commodity.

But total production at Rio Tinto’s operations was about 330mt, meaning exports across the operation were valued at $28.8 billion.

That additional portion includes sales by Gina Rinehart’s Hancock Prospecting, which holds a 50 per cent beneficial ownership of the Hope Downs joint venture.

Rio’s total export figure increased about $5 billion, mostly driven by a strong iron ore price in 2017, which reached highs of more than $US90 per tonne in March of that year.

BHP, which ranks second on the list of biggest exporters, has a different reporting period, operating on a financial year ending in June, and consequently the impact of stronger iron ore prices in 2017 has already washed through its figures. 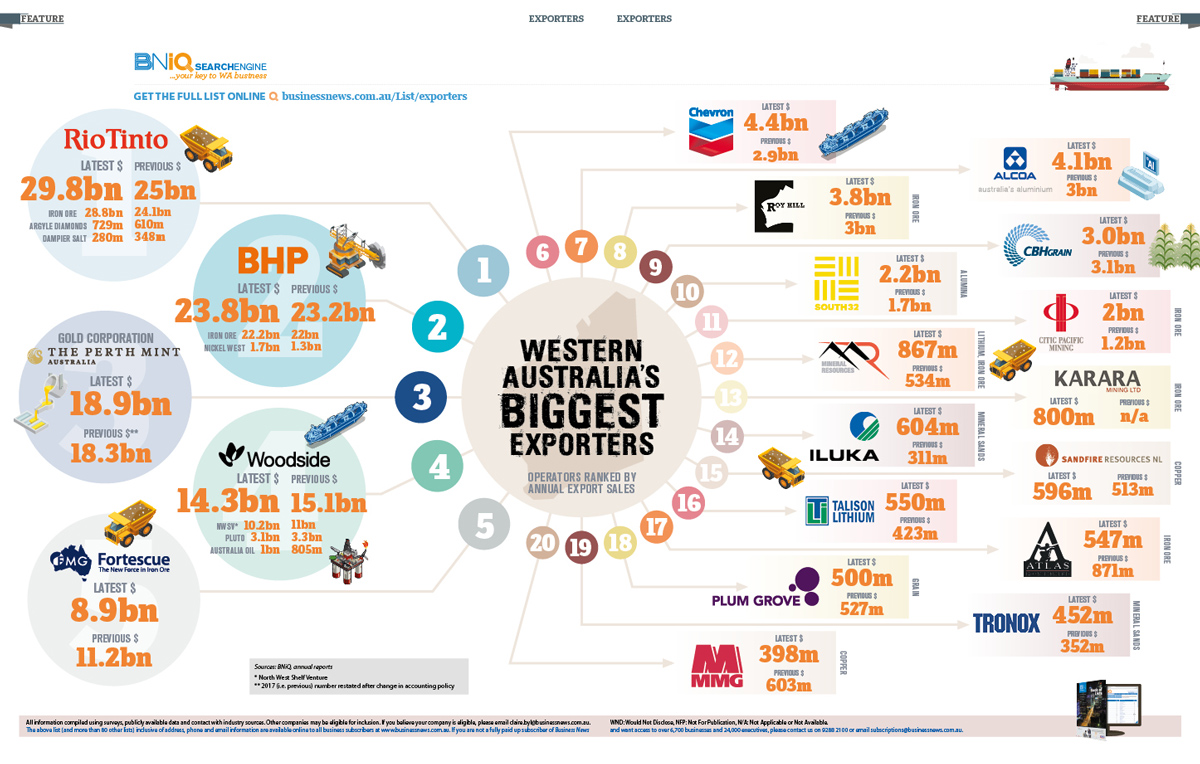 Iron ore exports through its operations were about $22.2 billion, with the company having an 85 per cent equity share of about $18.9 billion.

The bigger impact on BHP’s export numbers came from the Nickel West division, where revenue increased $US348 million ($450 million) to be $US1.3 billion as the market for that metal, used in electric batteries, rallied by as much as 75 per cent.

For comparison, in the 2013 biggest exporters list, BHP’s iron ore revenue was about $21.1 billion, at a time when the iron ore price was trading around  $US120/t.

It has fallen about 40 per cent since, to be about $US73/t, reaching lows below $US40/t in the intervening period.

The price drop has been balanced by a depreciating exchange rate and increase in production – up 50 per cent to be 280mt in 2018.

Deloitte chief economist Matt Judkins said WA had entered the third phase of the mining boom, with higher production volumes from big capacity expansions hitting the market, both in iron ore and gas.

“That’s also been supported by robust pricing as well, at least compared to what it was (a few years) ago,” Mr Judkins said.

Now, miners were focused on building replacement production as older deposits depleted, he said, through projects such as BHP’s South Flank.

That means the big miners will be likely to maintain their places in the list’s top two spots.

The biggest mover in 2018 was state government-owned Gold Corporation, which runs the Perth Mint and the gold refinery at Perth Airport.

Revenue for Gold Corporation was $18.9 billion, rising from $7.9 billion in last year’s list.

That was enough for the entity to lift two places into third position.

But the big increase was not driven by increased production or a price change, rather a change in accounting policy, adopting the AASB 15 standard, according to the corporation’s annual report.

The new rules mean the mint reports revenue, including unallocated metals credits received from customers, matched by a corresponding increase in costs of sale.

The upshot is that revenue in the 2017 financial year was restated as $18.3 billion in the company’s most recent annual report, meaning underlying growth was 3.3 per cent.

Significant discounting in prices for lower-grade iron ore impacted on Fortescue Metals Group’s revenue substantially, reducing it about 20 per cent to be $8.9 billion.

The state’s two alumina producers both lifted revenue, with Alcoa rising about 37 per cent to $4.1 billion, while Worsley Alumina owner South32 lifted 29 per cent to $2.2 billion.

Gas producers are likely to move up the list in coming years.

US-based energy giant Chevron has continued a slow progression up the rankings, settling in sixth place this year, with revenue of $4.4 billion, Business News estimates.

Chevron reported Australian revenue of $US3 billion ($3.9 billion) in the 2017 calendar year, which comes from three sources – its Gorgon and Wheatstone operations, and its 16.7 per cent share of the North West Shelf Venture, the five-train LNG plant in Karratha operated by Woodside Petroleum.

Woodside, which also holds a 16.7 per cent stake in NWS, reported revenue from the venture at $US1.3 billion.

Assuming all partners have  similar contract pricing, that indicates total NWSV revenue of about $US7.8 billion ($10.2 billion).

Woodside owns a 13 per cent stake in the Chevron-operated Wheatstone project, with Woodside reporting revenue of $US36 million ($47 million) from Wheatstonein the 2017 calendar year, after the first LNG shipment in October of that year.

Extrapolating from these numbers Business News estimates total 2017 revenue from Chevron’s Gorgon project would be about $US3 billion.

For Chevron, 2019 will be the first full calendar year with all five trains from the Gorgon and Wheatstone projects in full operation, so the company’s total will likely increase.

Woodside’s recently announced plan to build a second train at the Pluto LNG facility, would double its capacity and add about $US2.4 billion of annual revenue, although the project is not expected to begin shipping gas until well into the next decade.

Shell is expected to join the list next year when its Prelude floating LNG facility begins production, although it is not yet clear exactly when that will be.

Prelude will have 5.3 million tonnes per annum of capacity, a third of the level of Gorgon.

Both Prelude and Inpex’s Ichthys project have been in the commissioning stage for some months.

“Everybody wants to make sure that in the commissioning process, it always has a focus on safety ... on environmental impact and is done in a way that there is no negative impact to the asset.”

Regarding new projects, he said some operators would seek to get the most out of existing assets, while others would have been encouraged by the more buoyant oil price.

“(Now), the longer-term positive view on what the market is going to look like in terms of demand is starting to stimulate investment.”