Expansion plans are in the works for some of WA’s biggest exporters, but commodity prices and projects face uncertainty. 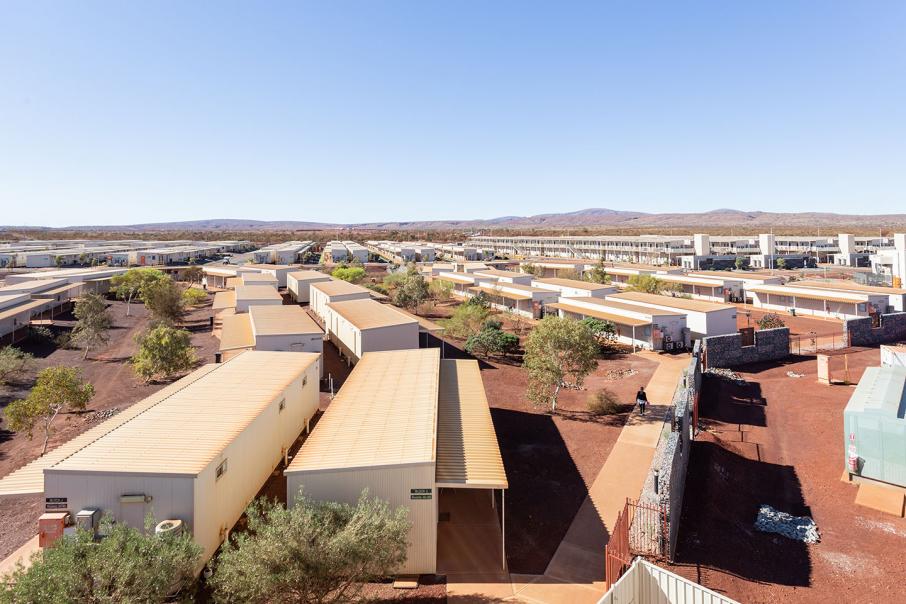 Keeping workers safe from COVID-19 in mine camps was critical to the industry’s performance. Photo: Gabriel Oliveira

A two-week period in March made all the difference for Western Australia’s export sector, which has outperformed much of the world during the COVID-19 crisis.

In that fortnight, flights to mine sites were doubled to ensure social distancing on planes, and temperature checks became a pre-boarding requirement.

Rosters were changed to reduce travel and those workers who could stay home did so.

While local resources companies did their best to prevent a virus breakout at their sites, mines were shut down in Brazil, WA’s biggest competitor in seaborne iron ore production.

That contributed to a big increase in the price of the steelmaking commodity.

Association of Mining and Exploration Companies chief executive Warren Pearce told Business News the sector had made a huge effort to continue operations safely during the pandemic.

“It was incredible,” Mr Pearce said.

“Once it became clear what was going to happen … [businesses] changed the way they worked.”

Those changes came with an additional cost for companies and a cultural change for employees, he said.

Nonetheless, any spread of coronavirus in workforce accommodation would shut mines and hit the economy, so governments and businesses worked together to keep the industry open, Mr Pearce said.

For Treasurer Ben Wyatt, iron ore royalties were expected to be $2.3 billion more this financial year than what was forecast in the December mid-year review, with the industry in position to make the most of high prices.

The economic impact of the resources sector on the state’s overall economic health stretches far beyond its effect on the budget bottom line. 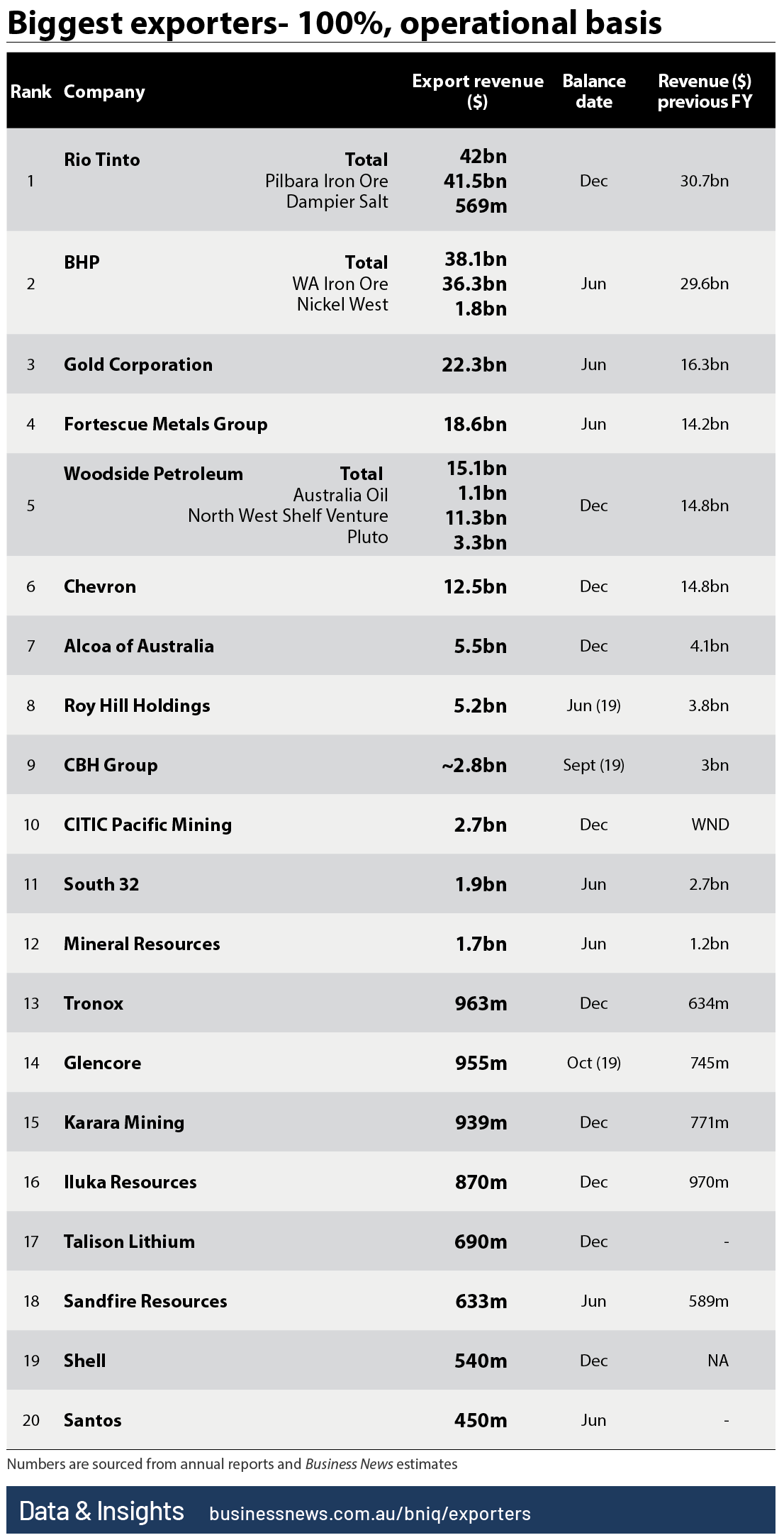 Those numbers do not fully reflect the COVID-19 period, as some businesses report on a year-to-December basis.

All up, WA’s merchandise exports totalled $184 billion in the 2020 financial year, according to the Australian Bureau of Statistics.

The numbers diverge from many big economies around the world, and highlight the uniqueness of WA. 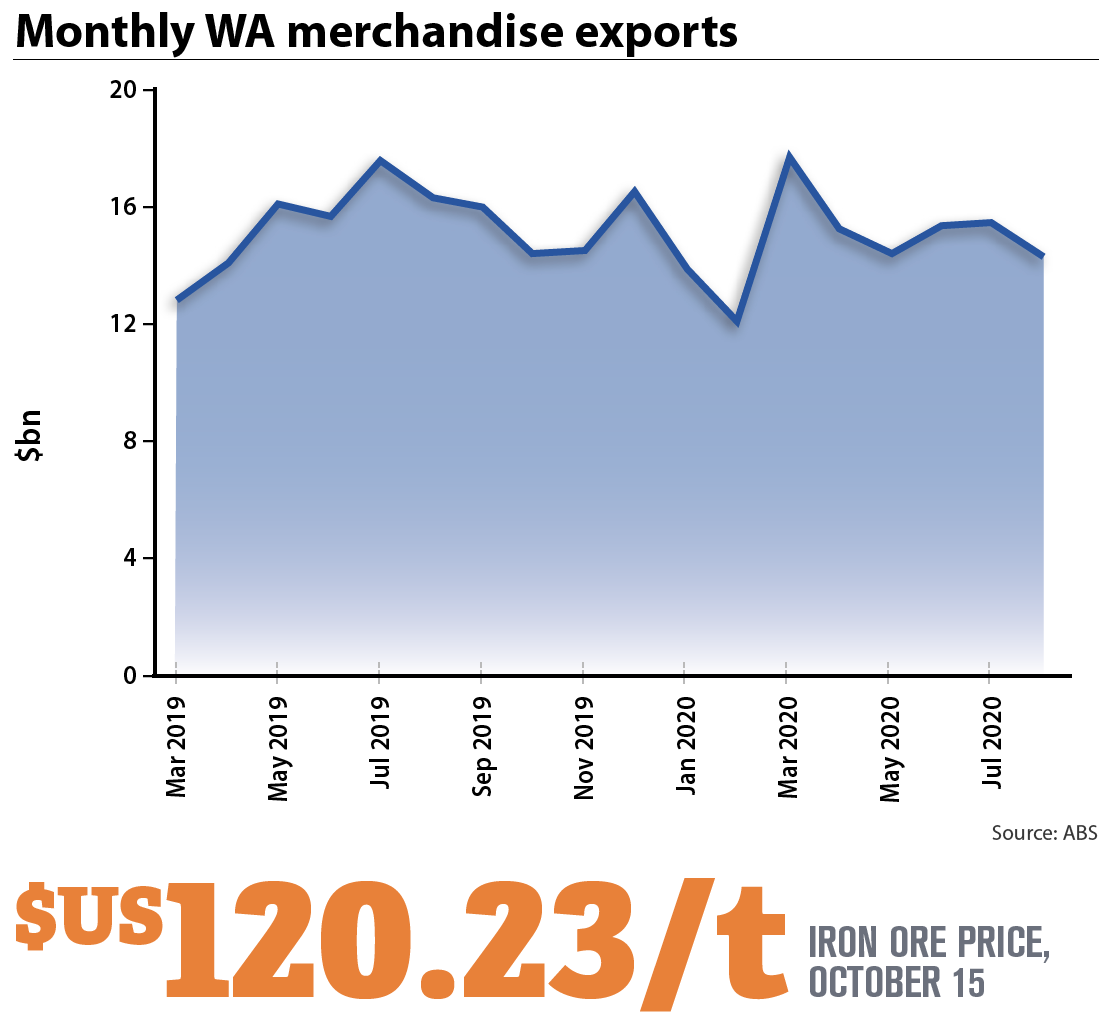 US exports were about 17 per cent lower in the first six months of 2020 compared to the same period in 2019, while UK exports in the 12 months to July were down 6.5 per cent on the prior corresponding period.

The drop was the largest in more than 10 years.

So it’s clear WA has bucked the trend.

But the shock of COVID-19 also shows that the shadow of possible risks always looms.

AMEC’s Mr Pearce said a strong infrastructure pipeline around the world, driven by government stimulus packages, was promising for the mining industry.

In addition, junior miners had raised substantial funds for exploration in recent months, which he said would bring long-term benefit.

Rio Tinto reported an average realised price for iron ore of $US85.40/wet metric tonne in the first half of 2020, an 8 per cent increase on the company’s price for calendar 2019.

That highlights some of the potential upside for exporters, with a possible $200 billion annualised rate no longer a distant possibility.

Three of the biggest miners on the list plan to sell an additional 70 million tonnes of iron ore per annum over the longer term, an increase of about 8 per cent in iron ore sales.

It would mean BHP, ranked second on the list, could close in on Rio Tinto’s long-term position as WA’s top exporter.

Production at BHP’s WA iron ore operations was 281mt, which was worth about $38 billion.

In May, the company applied to lift its licence for capacity at Port Hedland from 290mtpa to 330mtpa.

That’s an increase of about 13 per cent.

Fortescue Metals Group has its own expansion plans, approved by the Environmental Protection Authority in September.

FMG will increase port capacity from 175mtpa to 210mtpa.

While a portion of that will be growth in supply of hematite ore, the main growth source will be magnetite ore, which will be mined at the Iron Bridge project and processed into a concentrate.

Magnetite sells for a higher price than hematite ore, because the concentrate has a higher iron content, often earning a premium of 20 or 30 per cent.

However, costs of production are usually higher.

The third big iron ore miner planning an expansion is Roy Hill Holdings, controlled by Hancock Prospecting, which has obtained approval to lift shipments from 55mtpa to 60mtpa, it is now aiming for 70mtpa.

At Hancock subsidiary, Atlas Iron, there will be a slight decrease in production as the Corunna Downs and Miralga Creek mines come on line.

Sustaining production will be between 6mtpa and 7mtpa, down from 7.8mtpa to 8.5mtpa.

Outside of the top 10, 12th ranked Mineral Resources has particular potential to move up the list.

It plans to build new export berths at South West Creek in Port Hedland, and has a growing lithium operation.

In an August results briefing, chief executive Chris Ellison said he expected iron ore production to double in 2021 to about 20mtpa.

There could be more to come in the year following, through the Marillana and West Pilbara projects, which will ship through Port Hedland.

“We hit a run rate of 12.5mtpa at Koolyanobbing in June and Iron Valley has been steady at 6.7 million tonnes,” Mr Ellison said.

“[Koolyanobbing] probably can do a little bit better than that, but we won’t be going too much higher than that.

“We originally announced last year, we were aiming for 15mtpa.

“We’re not going to get there because of the rail restrictions.”

Mr Ellison also said a joint venture with Albemarle Corporation, which will produce lithium hydroxide from a refinery in Kemerton, was expected to begin commissioning processing trains in the second half of next year.

US-based Albemarle said it would have an initial capacity of 50,000 tonnes of lithium carbonate equivalent when the refinery started up.

Pilbara Ports Authority’s annual report shows the port hit a record throughput of 538mt in the 2020 financial year, up 5 per cent.

It will be a tight squeeze.

In September last year, the government said a completed expansion project had lifted capacity by 40mtpa to 617mtpa.

The authority is also planning a new cargo facility at Lumsden Point, in Port Hedland.

There’s plenty of optimism about the potential for continued growth of resources exports, but threats always loom.

Despite the possible lift in iron ore capacity, it’s widely expected the price will fall in coming years.

Brazilian giant Vale is reportedly expecting to lift capacity from 318mtpa to 400mtpa, with potential to grow to 450mtpa in the medium term.

That would put downward pressure on the iron ore price.

Longer term, there’s the potential threat of Simandou in Guinea, which Chinese investors see as an alternative supply source.

The state budget estimates a price of $US64/t for the 2022 financial year, which would reduce revenues for some of the biggest exporters.

It’s also possible some projects may not proceed.

So while there is much promise that iron ore revenues can continue to smash records, it is far from a certainty.

The obvious threat is a potential second wave of COVID-19.

“If our country goes into significant community transmission, we’ll have to work hard to keep it out of our industry,” Mr Pearce said.

He added that the labour market was expected to tighten, with some interstate FIFO workers who had moved to WA during the crisis to avoid the hard border likely to return home during Christmas and stay.

The oil and gas industry offers a good example of how quickly things can change.

Producers facing a low oil price environment are also dealing with an aggressive competitive approach from countries including Qatar.

That number is calculated by referring to the annual report of one of its venture partners.

This year, the floating LNG processing vessel was out of action for nearly six months.

At Chevron’s Gorgon, a phased shutdown will be needed to inspect heat exchangers at the LNG trains.

Woodside Petroleum is still developing the Scarborough project, which will supply gas for a second liquefaction train at the Pluto facility near Karratha.

In March, Woodside delayed a final investment decision, which is now expected next year.

At a recent Business News forum, chief executive Peter Coleman suggested front-end engineering and design would get under way early next year.

Pluto Train 2 would add about 5mtpa of capacity to the 22mtpa already operated by Woodside.

Deloitte national oil and gas leader Bernadette Cullinane said there was reduced potential for expansion because of the economic downturn.

Nonetheless, she was positive.

“Global energy demand will continue to increase, much of that will be coming from Asia and non-OECD economic growth,” Ms Cullinane said.