WESTERN Australian exporters have received encouraging news about the economies of some of the state's key trading partners, in particular India and China, with strong signs of growth for the future. 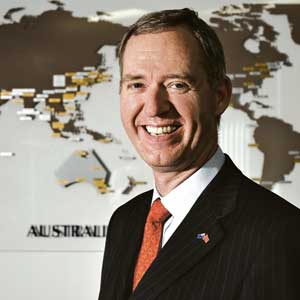 WESTERN Australian exporters have received encouraging news about the economies of some of the state's key trading partners, in particular India and China, with strong signs of growth for the future.

Austrade chief economist Tim Harcourt said there were promising indications about which sectors were doing well and where opportunities lay.

"There's plenty of examples of where exporters have actually hung in there, as they did during the Asian financial crisis, and as we know, particularly here in Western Australia, there was very strong recovery and the exporters that stayed in actually did very well."

"The China story hasn't changed or really stopped or moved off in any different direction from where it was," Mr Wright said.

"China has averaged a growth rate of around 9 per cent over the last 30 years."

And he says there are few signs it's slowing down.

"The Chinese government is forecasting around 7.7 per cent.

"Whatever way you look at it it's still a growth story, which means China will generate more economic activity in 2009 than it did in 2008."

He said that, during the past five to seven years, China has been growing at an unsustainable rate, above 10 per cent.

Due to its overheated economy, Mr Wright believes the world's most populous country deliberately put the brakes on its property sector.

"As a result of the finance crisis that hit late last year the export sector was also hit, making it a double whammy for China at the end of last year," Mr Wright said.

"But the story is still the same, China's economic growth will continue."

It's a similar story for India.

Figures from the Depart of Foreign Affairs and Trade show China was WA's largest two-way merchandise trading partner in 2007-08, accounting for 20 per cent of total trade, which equates to $19.2 billion. Of this total, $17.3 billion was made up of exports.

By contrast, India was the state's fourth largest export market, valued at $4.9 billion.

Austrade senior trade commissioner India and South Asia, Peter Linford, believes this is set to grow in the future.

"Much of what Chris [Wright] has said is applicable to India as well; the two have been running on some very high growth rates," Mr Linford said.

"India was running at an average 9 per cent growth rate over the last four years.

"All the south Asian countries which include Pakistan, Afghanistan, Bangladesh, Sri Lanka and the Maldives ... they're all running at growth rates at above 5 per cent or 6 per cent.

"So the opportunities for Australian companies in those countries are very good."

Austrade and the Export Finance and Insurance Corporation jointly presented a series of seminars around the country, visiting Perth last week, to help business meet the challenges of the current financial crisis and identify arising opportunities.