AGRICULTURE exporters, lobby groups and industry bodies are concerned at the prospect of increased certification costs from the Australian Quarantine and Inspection Service if a plan to scrap a 40 per cent subsidy goes ahead. 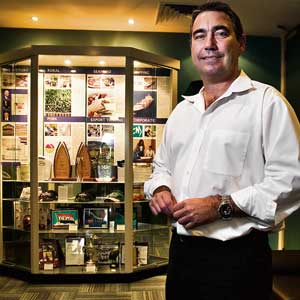 FLOW-ON EFFECT: ANDREW MOSTYN EXPECTS THE LOSS IN SUBSIDIES WILL HAVE A NEGATIVE EFFECT ON THE MEAT INDUSTRY. PHOTO: GRANT CURRALL

AGRICULTURE exporters, lobby groups and industry bodies are concerned at the prospect of increased certification costs from the Australian Quarantine and Inspection Service if a plan to scrap a 40 per cent subsidy goes ahead.

Those likely to be affected by this measure include agri-businesses involved in exporting dairy, meat, seafood, stone fruit, and even cut flowers.

Exporters require a certain level of documentation from AQIS to sell their products overseas. Until last week, the federal government provided a 40 per cent subsidy for certification costs to alleviate the burden on exporters.

But a decision to remove the subsidy means exporters will have to pay 100 per cent of the AQIS export fees.

Canberra-based lobby group, Small to Medium Enterprise Australia, is calling on the Senate to block the changes before they come into effect on July 1.

"During these hard economic times, we wouldn't want to see such large increases come in all in one hit, especially if exporters have forward orders," he said.

Pastoralists and Graziers Association livestock chairman Tim D'Arcy is concerned about the proposed removal of the subsidy.

"I'm opposed to the move but I recognise the fact the government is not likely to retract their position," he said.

Mr D'Arcy, who is also the vice-president of the Cattle Council of Australia, would like to see an improvement in the level of service offered by AQIS to fulfil the 40 per cent increase in certification costs.

It's a sentiment echoed by Craig Mostyn Group executive director Andrew Mostyn, who suggests any loss in subsidies won't be good for the meat industry.

"For us, it's not going to be a small figure in extra costs, and I can only imagine for the Harvey Beef and others it would be significantly more than that," Mr Mostyn said.

"On the export front we're battling, and we have done anyway because the feeling is we don't get many subsidies like European countries," Mr Jay said.

AQIS says the detail of proposed fees and charges remains subject to consultation between the service and industry, and is not yet finalised.