Domestic consumption is down, but the outlook for beef and sheepmeat producers offshore is bright. 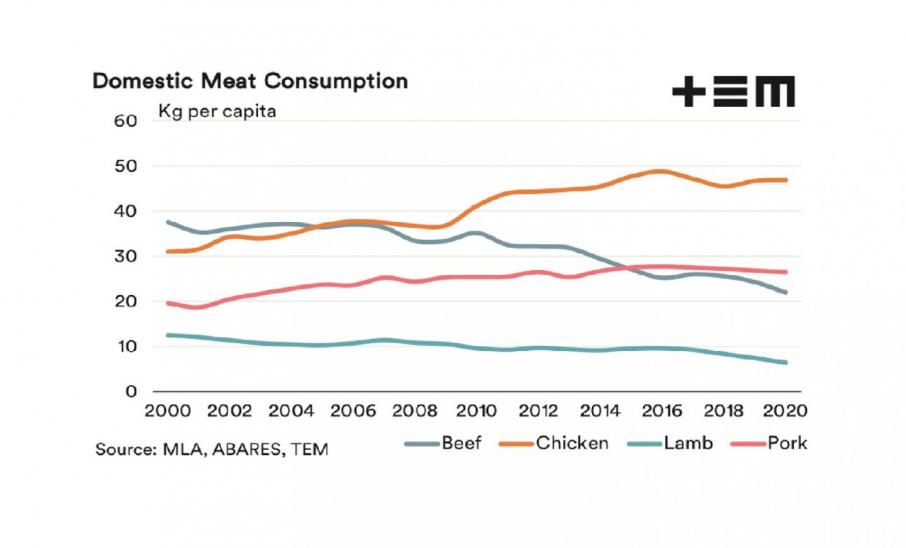 There have been suggestions a new wave of consumers is shunning red meat due to environmental concerns, particularly over water use and greenhouse gas emissions.

Domestic meat consumption statistics certainly demonstrate a trend away from red meat within Australia since the early 2000s. Beef consumption per person per year has eased from 38 kilograms two decades ago to an estimate of 22kg this season, according to the Meat and Livestock Australia October 2020 ‘Cattle Market Outlook’.

The numbers are even more concerning for sheepmeat. Lamb consumption within Australia has fallen from 12kg per person per annum in 2000 to just over 6kg in 2020. Meanwhile, the annual domestic consumption of mutton has gone from nearly 8kg to 0.35 kg per capita over the same timeframe.

The trend in meat consumption in Australia is mirrored in many developed countries, with consumers opting for a reduced red meat intake, often citing lifestyle and diet considerations. While the higher relative cost of red meat to chicken and pork is also a factor in the reduced demand, there is an increasing suggestion that consumers in developed countries are beginning to move away from red meat for environmental reasons.

In Australia, MLA has committed to a zero-carbon emissions program for the red meat sector by 2030.

It is hard to believe the trend away from red meat is mainly due to consumers’ concerns about the environmental sustainability of the sector. But, let us for a moment hypothesise that it is a significant concern for consumers within the developing world, and that the trend away from red meat will grow in the coming decades. Does this spell the end for the Australian red meat producer?

Well, not really. Thankfully, the Australian red meat sector, both beef and sheepmeat, is heavily export-oriented.

For the past two decades, more than 70 per cent of our beef production has been destined for overseas markets. Furthermore, in the past decade, the combined export volumes of lamb and mutton from Australia have grown from around 55 per cent of production to close to 75 per cent. The future of the Australian red meat sector is very dependent on overseas consumers.

It is well known that meat demand increases as per capita income grows within a nation. This is particularly relevant for developing countries on Australia’s doorstep such as Indonesia, with a huge population and a fast-growing economy.

Global sheepmeat consumption, which is considered a niche market in some countries and a premium component of diets in many other countries, is expected to lift by 2mt over the next decade and will account for 6 per cent of the additional meat consumed, according to the OECD.

Additionally, the OECD expects sheepmeat consumption worldwide to increase over the coming decade, despite the expectation that prices will remain high.

In contrast, the only real competitor for Australian producers in the export space for sheepmeat is our good friends across the ditch in New Zealand.

Combined, Australia and New Zealand provide more than 70 per cent of the globe’s sheepmeat requirements. In recent years, that balance has swayed towards Australia as being the dominant provider, accounting for around 40 per cent of global supply. With a growing appetite for sheepmeat and only one other global competitor, the Australian sheep producer is perfectly positioned to benefit.