SPECIAL REPORT: With a mere handful of projects under construction, it’s what is in store for the future that has everyone guessing. Click through to also see our list of WA mining projects. 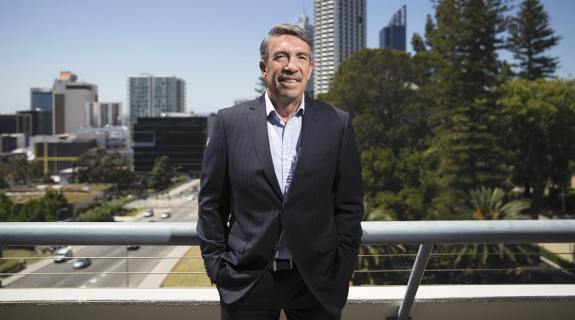 With a mere handful of projects under construction, it’s what is in store for the future that has everyone guessing.

Also in this special report: how WA lithium is set for a technology driven boom and what comes after the final two mega iron projects. 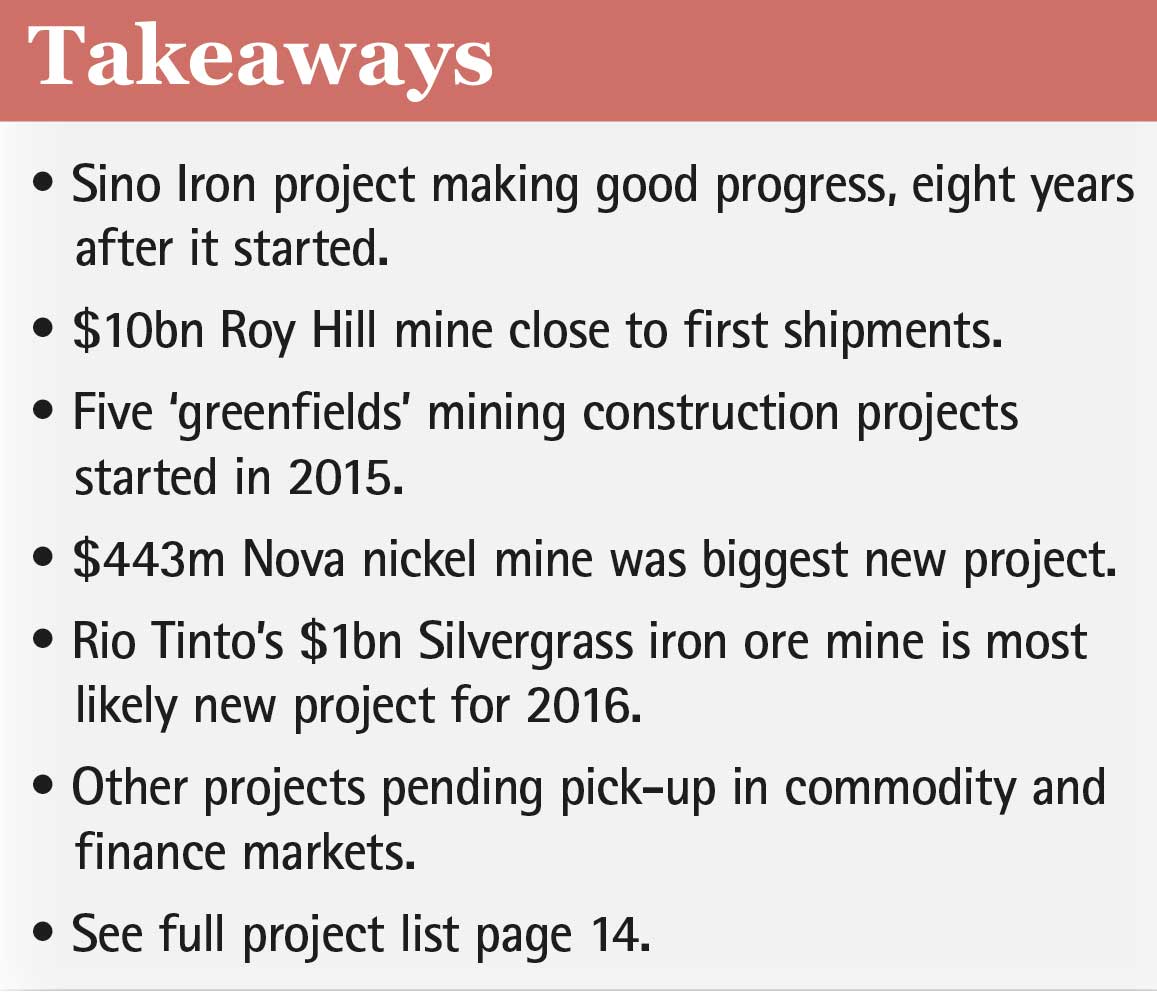 Just five significant ‘greenfields’ mining projects, worth $760 million, started development in Western Australia during the past year, research by Business News has found.

Looking ahead to next year, there might be only one major new mining project; and even that is not guaranteed.

These numbers highlight the dramatic slowdown in mining construction activity in WA, after a decade when multiple billion-dollar projects started every year.

With WA’s economy driven by commodity prices, this pattern is not new, though the scale of the slowdown is.

Nor is the drop-of in activity confined to mining projects in WA.

In Deloitte Access Economics’ latest investment monitor, the value of definite projects (under construction or committed) across Australia fell to its lowest level in four years.

As a result, engineering activity has contracted in nine of the past 10 quarters.

Industry veterans who have lived through multiple cycles are not panicking; instead, they are laying the groundwork for the next wave of mining projects that will commence when commodity prices and financial markets improve.

As discussed below, these projects range across mineral sands, uranium, iron ore, vanadium and numerous other commodities.

While this preparatory work is under way, the slowdown has benefited projects currently in train, with skilled labour more readily available and contracting rates falling sharply. 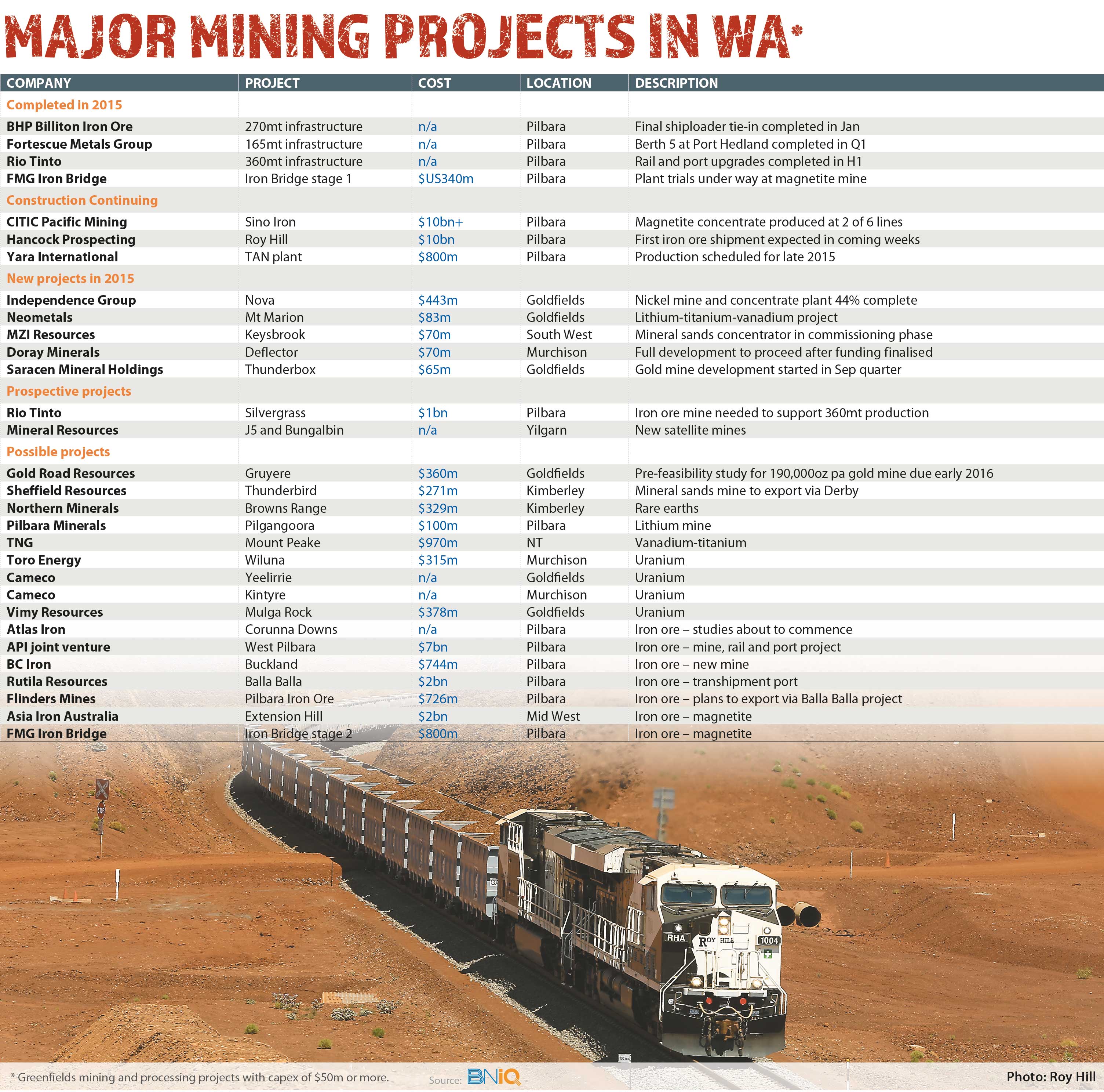 Roy Hill is on the brink of celebrating its first shipment any week now, while Citic has reported good progress on commissioning and construction activity.

The next greenfields project in iron ore is likely to be Rio Tinto’s Silvergrass mine, expected to cost about $1 billion.

In the meantime, the iron ore majors are spending hundreds of millions each year on sustaining capital expenditure.

That’s a fraction of what they spent over the past decade but nonetheless presents opportunities for contractors who might otherwise have an empty order book (see also Pilbara resets as iron ore majors shift spending focus).

The biggest greenfields project to start this year was the $443 million Nova nickel-copper mine, kicked off by Sirius Resources in January.

Independence is in the midst of an optimisation study designed to accelerate the production ramp-up at Nova and improve returns.

Another new development in the Goldfields is Saracen Mineral Holdings’ $65 million Thunderbox development.

The gold sector is a relatively bright spot in the mining industry, with multiple small projects either under way or on the cards.

The next substantial gold development will be Doray Minerals’ $70 million Deflector project.

The latest development in this sector is the Mt Marion lithium project jointly owned by Neometals and Minerals Resources, which is currently being developed at a cost of $83 million.

They are to be followed by General Mining Corporation, which is due to resume production at the Mt Cattlin project early next year, after buying out Galaxy Resources.

The many aspiring miners in WA include Sheffield Resources, which last week recruited experienced operator Bruce McFadzean as managing director to lead development of its Thunderbird mineral sands project in the Kimberley.

The tenements were previously held by Rio Tinto, which conducted exploration drilling between 2004 and 2009, before moving on.

Sheffield seized the opportunity, and has been exploring and refining its plans to suit the current market.

Its original pre-feasibility study proposed a mining operation with throughput of 18 million tonnes per annum and a capex bill of $368 million.

Its updated study, released last month, has cut initial throughput to 12mtpa and brought down the required capex to $271 million.

Mr McFadzean describes Thundebird as one of the most significant mining projects on the horizon for WA. “It’s as good as I’ve seen,” he said, with key attributes including a premium product and long mine life.

Mr McFadzean has put his money where his mouth is, agreeing to a remuneration package that ties his reward to success at Thunderbird.

His next key goal will be completion of a definite feasibility study that delivers a better result than the updated PFS.

Like the aspiring miners in other sectors, such as uranium companies Toro Energy and Cameco, ultimate success will be dependent on commodity and financial markets improving.

In WA’s South West, MZI Resources is close to completing its Keysbrook mineral sands mine, which commenced early this year.

The company said continuous mining has begun and commissioning of the wet concentrator plant was due to start last week.

MZI said it was in discussions with customers to achieve first product sales before the end of 2015, slightly ahead of the original target of early 2016.

A key factor in MZI’s progress was the backing of private equity group Resource Capital Funds, which holds a 30.2 per cent shareholding and provided bridge loan facilities.

RCF extended its support last week when it agreed to take nearly half of a $43 million placement, which will likely lift its shareholding to 39 per cent.

RCF has been one of the most active investors in mining stocks over the past couple of years, in many cases taking a longer-term countercyclical view.

RCF agreed this year to provide a $30 million funding package to Vimy, comprising a share placement, a bridging loan, and a payment to be made in return for a future production royalty from the Mulga Rock uranium project north-east of Kalgoorlie.

Its latest deal, announced last week, provided extra funding for Bannerman, to help that company move to full ownership of its Etango project, pay off debt and boost working capital.

RCF has dep pockets after securing capital commitments of $2.04 billion for its sixth fund.

That money is currently being invested in resources companies around the world.

Wolf managing director Russell Clark is effusive about the support he has obtained from RCF, which holds a 42 per cent stake, and New Zealand’s Todd Corporation, which has a 32 per cent stake.

“When I look at why we’ve been successful and others haven’t, it’s absolutely because we have two major strategic shareholders,” Mr Clark said.

He has recently returned to Perth from the official opening of Wolf’s 140 million pound Hemerdon tungsten and tin mine in southern England – the first new mining projects in that country for 45 years.

Wolf reached that milestone, only because it has been supported by RCF since 2009, when the private equity fund invested $2 million to fund a pre-feasibility study.