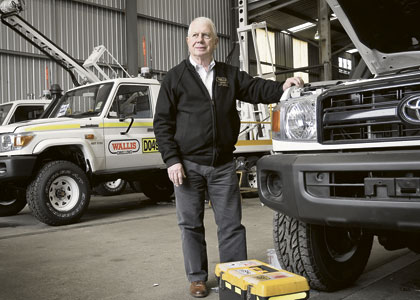 SURVIVOR: Graeme Wallis has been around long enough to experience highs and lows in the contract drilling market, but is confident current demand will remain strong. Photo: Grant Currall

‘UNPRECEDENTED’ would be an apt word to describe demand for the services of family owned and operated Wallis Drilling, which has done surface drilling work for some of the biggest open-pit miners since it was founded in 1964.

The company recently secured contracts with Rio Tinto, Atlas Iron, and Evolution Mining and has added another five heavy drill rigs to its fleet – all of which are committed to contracts for the foreseeable future.

Demand from miners requiring drilling services is now more than Wallis can handle; it has had to turn away business simply because it doesn’t have enough drill rigs to service them all.

The business is growing as a result; about 50 new staff have been added to the books in the past few months, bringing the total number of employees to about 300.

But Wallis has been in the market for a long time, as has its managing director Graeme Wallis, who has been at the helm for the best part of 40 years.

He’s seen surges like the current boom happen before, and knows they need to be taken with a grain of salt.

“The industry is fairly vibrant at the moment and there are a good amount of contracts available,” Mr Wallis said.

“But I’ve seen busy times like this before when I’ve been confident that it’s going to continue and it hasn’t. The GFC was a classic; there we were all charging along and going strong and all of a sudden ‘bang’.”

Wallis lost 40 per cent of its turnover overnight during the GFC, but managed to recover and is now achieving year-on-year growth of around 20 per cent.

Part of Wallis’ current confidence comes down to its focus on servicing emerging coal seam gas miners on the east coast and iron ore producers in WA.

Mr Wallis believes that, while some drillers are at the mercy of fluctuating demand for other commodities such as gold, it’s in a stable environment with demand for iron ore unlikely to fall away.

“Coal seam gas and iron ore are both products that are in genuine demand; they’re not being stockpiled, they’re being used,” he said.

“China’s still got 350 million people that want to get out of the rural lifestyle and move into cities, so they’ve still got to house them.”

Demand for Wallis’ services has remained despite contracts for exploration work on greenfields projects all-but drying up about three or four years ago; Mr Wallis said all of the company’s business was now in established mines because the juniors couldn’t raise the funds for greenfield exploration.

Latest figures show miners’ investment in drilling existing deposits is growing at a rate almost twice that being spent on new deposit exploration.

That lack of greenfields investment has prompted some drilling contractors to put more emphasis on brownfields drilling – in particular underground drilling.

That’s not an option for Wallis.

“It’s a bit like if you drive down a freeway for instance; it’s hard to get off and go in another direction,” Mr Wallis said.

The company is an anomaly in a drilling contracting landscape where many players are adopting diversification strategies to stabilise business.

While it’s not taking the exit from the surface drilling route, listed company Ausdrill is considering establishing a specific underground mining division as part of a vertical integration strategy. The company is intending to become a full mining service provider, including underground mining.

If the move proceeds it will be a diversion from Ausdrill’s historical reliance on hard rock, surface-drilling contracts.

The company is already reporting benefits from the diversification; a record 23 per cent increase in revenue for the six months to December 2011 to $511.7 million has been partly attributed to Ausdrill’s acquisition of waterwell and mine service hole drilling company Connector Drilling, as well as increased manufacturing.

Ausdrill is also expanding its Australian Mining Services division to include equipment hire and maintenance services.

Last year, Ausdrill announced a $25 million contract with Central Norseman Gold Corporation for equipment hire, maintenance and labour, and a four-year contract with Kimberley Metals Group worth $34 million for the hire and maintenance of mining equipment.

But its core drill and blast work still
comes under the ‘mining services’ portfolio, which brings in more than half the company’s
revenue.

Fortescue Metals Group has been a solid client for Ausdrill; in 2008 a contract worth $300 million over five years was finalised for drill and blast and grade control in the Pilbara, and an extension worth $98 million for work at the Christmas Creek and Cloudbreak mines was signed in 2010.

In comparison to the growth of the overall mining services division, exploration drilling contracts make up 12 per cent of Ausdrill’s revenue.

The company said a strategy to provide a full-service offering to the mining industry prompted consideration of an underground division. This would be as either a start-up or by way of acquisition.

Ausdrill’s entrance into the underground mining market could put pressure on Swick Mining Services, which, like Wallis Drilling, is experiencing solid demand in its area of expertise.

Swick’s focus is on using diamond drills for underground mining, which managing director Kent Swick told WA Business News was a more stable and reliable source of revenue than other potential drilling work because of tight equity markets.

“(In this environment) any non-essential exploration may be deferred as companies tend to want to preserve cash,” he said.

It has recently secured key contracts with Gold Fields’ St Ives mine – an initial two-year contract for six drill rigs and a one-year contract at Rio Tinto’s Argyle diamond mine.

The company’s achieved year-on-year revenue growth of around 25 per cent and anticipated 2012 revenue to reach beyond $130 million.

It’s expecting growth to continue at a similar rate, but it may not come from home soil as the North American market provides more incentive to miners due to its lower cost base.

Swick is also embarking on a venture to fully manufacture its own rigs, which Mr Swick said would reduce the capital expenditure on rigs by about 25 per cent.

Boart Longyear is the largest drilling
contractor operating in the WA market and is also reporting strong demand, with about 75 per cent of its rigs committed to projects worldwide.

More than a quarter of the global company’s 2011 revenue came from the Asia Pacific region. Surface drilling has remained a key focus with open-pit drilling making up about 38 per cent, as opposed to the 9 per cent revenue coming from underground work.

The company also manufactures rigs and opened a plant in Forrestfield last year with plans to produce about 220 rigs per year at full capacity.