SPECIAL REPORT: Chevron’s $5 billion Gorgon phase two project announced in April might be the first in a wave of new oil and gas investments. 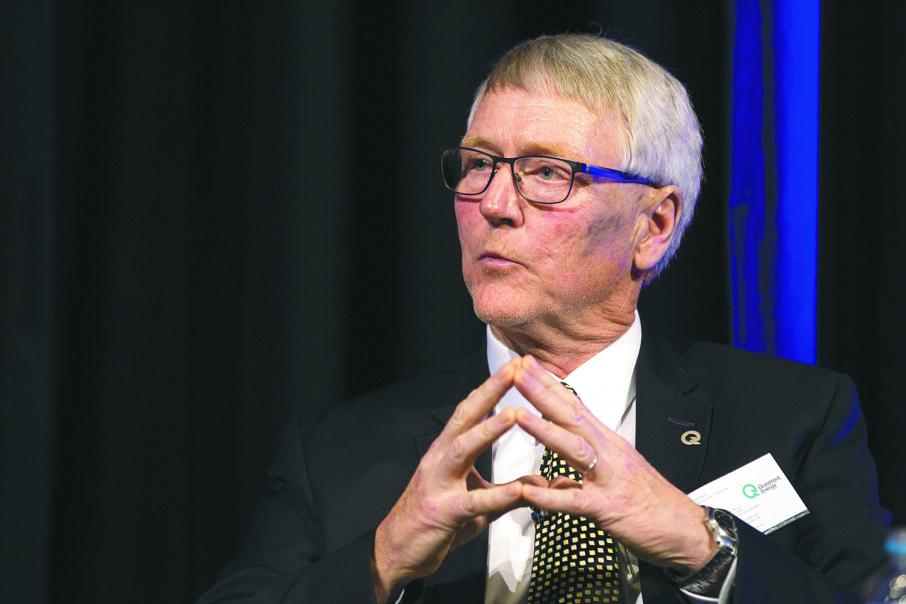 Chevron’s $5 billion Gorgon phase two project announced in April might be the first in a wave of new oil and gas investments.

Woodside Petroleum’s recent announcement it is considering a 4 million tonne to 5mt per annum LNG processing train at the Pluto plant near Karratha, up from 1.2mtpa, is instructive in showing the resurgence of optimism in the oil and gas space.

When the oil price was plunging depths below $US30 per barrel in early 2016, some analysts speculated there would be no new natural gas liquefaction trains in Western Australia for a decade or more.

In April last year, Woodside engaged contractors to assess a mini-train at Pluto, boosting capacity by around 20 per cent from 4.9mtpa.

That could now become a more ambitious expansion that would roughly double capacity, using gas from the offshore Scarborough LNG field in which Woodside upped its stake from 25 per cent to 75 per cent in a $US444 million deal with Exxon earlier this year.

Technical studies are already under way for the project, and the company has requested pricing proposals from major suppliers for onshore engineering and execution planning.

The decision to investigate an even bigger expansion of Pluto is one of numerous moves that will have oil and gas contractors breathing a sigh of relief.

For example, Woodside has begun concept definition for the Pyxis and Pluto North infill wells with a targeted start-up in 2021, about the same time a proposed interconnector between the Pluto plant and neighbouring Woodside-operated Karratha LNG facility might be finished.

Additional work includes a final investment decision on an infill well at the Pluto field, expected for completion next year, and a $US130 million water handling project at the Pluto platform for wet gas production from 2021.

Contracts for concept definition engineering at the Scarborough project have been awarded, while discussions are under way with potential offshore engineering, procurement and construction contractors. 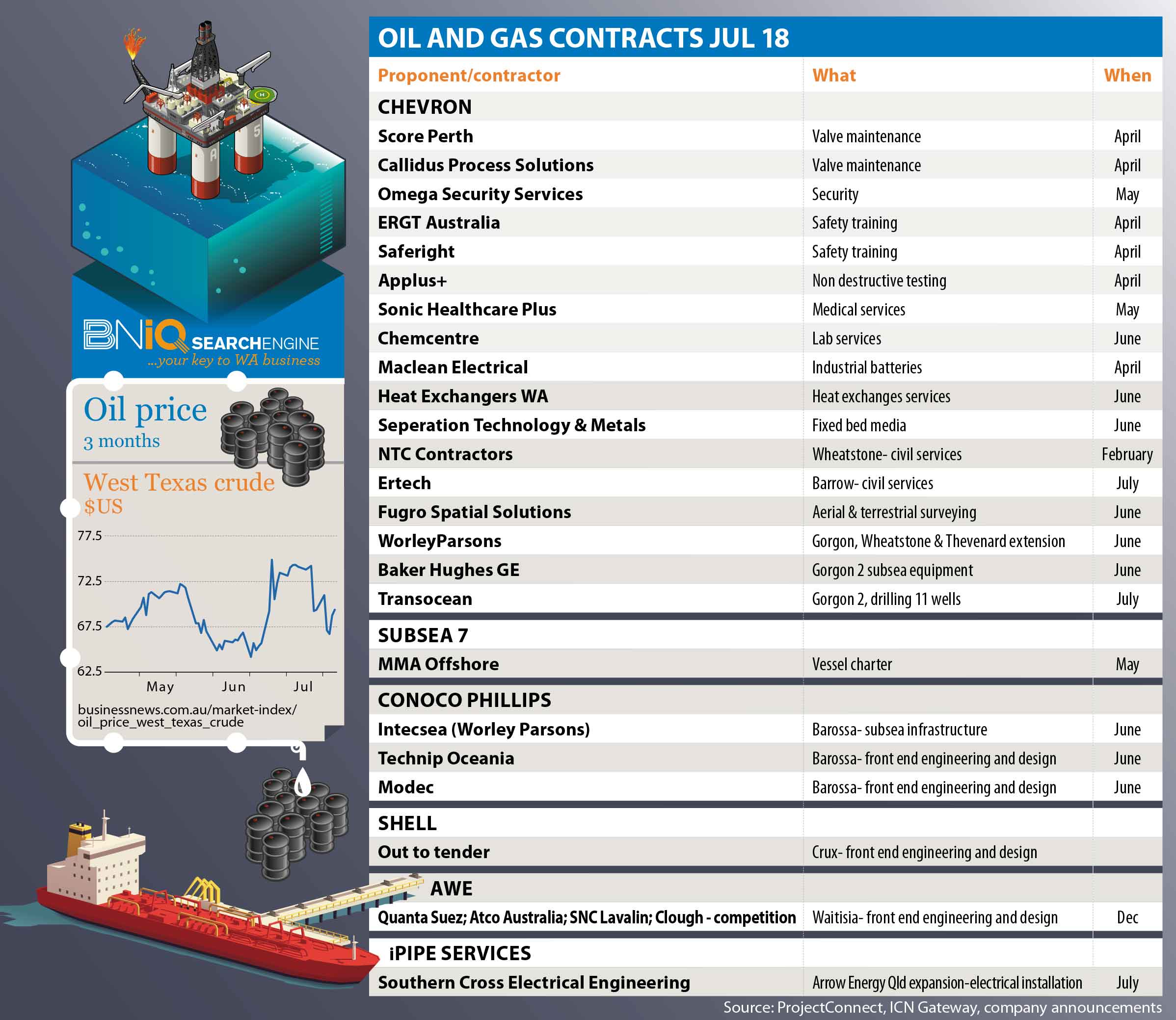 Start-up for the subsea work is targeted for 2023, a year earlier than previously, with a 2024 deadline for the onshore processing (Pluto train two) component.

An even bigger jackpot would be a development decision for the Browse gas fields, located around 400 kilometres north of Broome and controlled by a consortium of Woodside (30.6 per cent), Shell (27 per cent), BP (17.3 per cent), Mimi (14.4 per cent) and PetroChina (10.7 per cent).

Previous iterations of the concept included an onshore facility at James Price Point and a floating liquefaction plant, both of which were knocked back.

The most recent plan, fleshed out last year, will be a roughly 800km pipeline from Browse’s Torosa, Brecknock and Calliance fields to the Karratha LNG plant, which will have excess capacity from the middle of next decade.

But a big impediment is getting agreement between the Browse partners and North West Shelf Venture members, the latter of which own the Karratha plant.

Analysts had expected securing a deal between the seven different partners would be a tough ask, and Woodside chief executive Peter Coleman had gone as far as speculating in August 2017 that an ownership change may be needed.

Big news on this front was released earlier this month, when Mr Coleman said the two ventures had reached alignment on pricing and commercial terms to process Browse gas through Karratha.

The company already has two projects under way – the Greater Western Flank-2 extension at North West Shelf, and the Greater Enfield oil project.

GWF-2 was 91 per cent completed at the end of June, Woodside told markets in its recent quarterly update, with pipeline construction complete and subsea construction continuing.

Enfield was 63 per cent complete, with offshore work continuing.

Woodside is not the only proponent with a strong project pipeline (see map, page 19).

US-based Chevron is planning to spend $5 billion to drill new wells in the Gorgon and Janz-Io fields to replenish production as existing wells gradually deplete over their lifetimes.

At Chevron’s other major operation, Wheatstone, front end engineering and design (FEED) work has started for the Julimar-Brunello phase two tieback project, with an investment decision targeted in the June quarter of 2019. 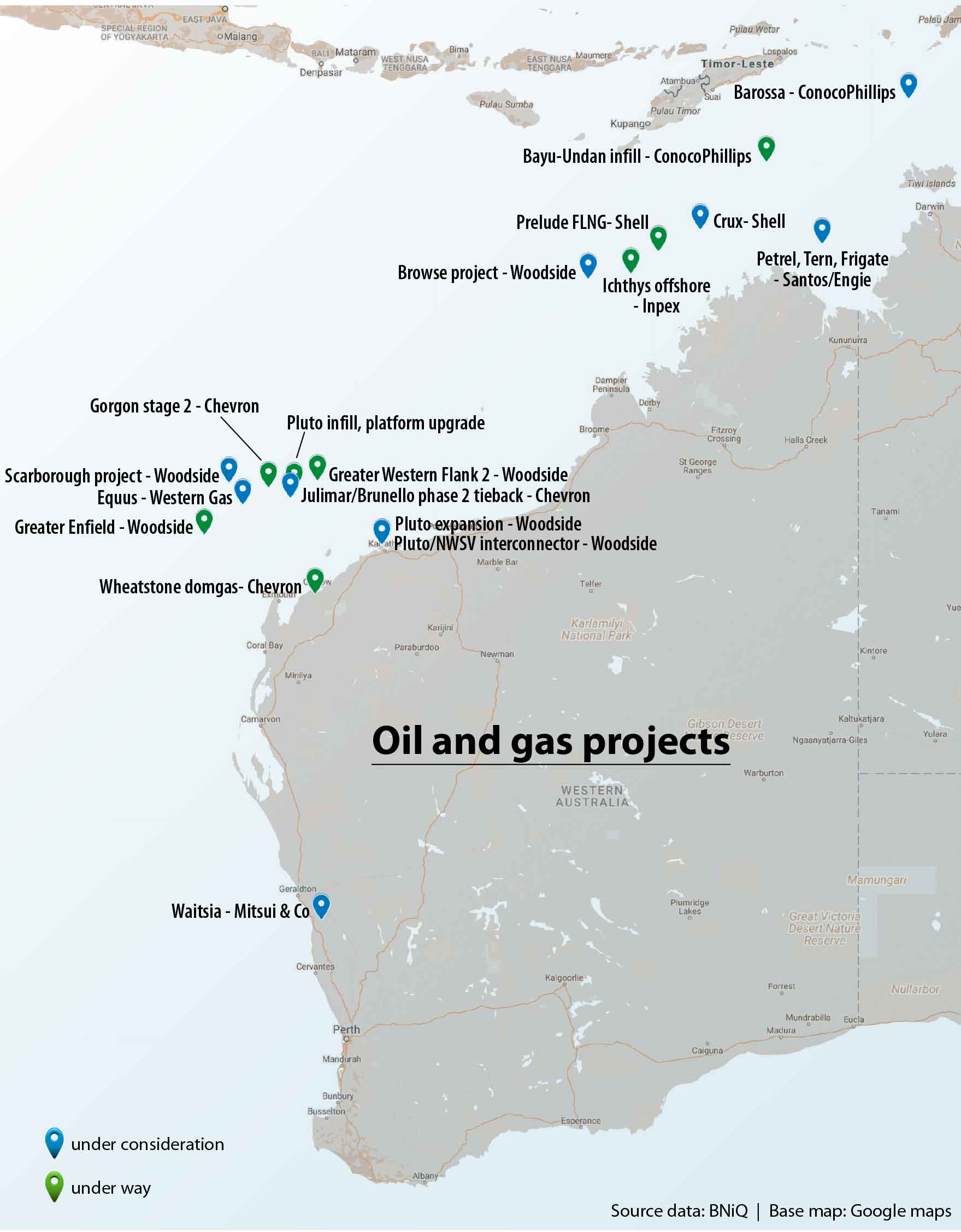 Construction of the Wheatstone domestic gas plant was 90 per cent complete as of June 30 this year, with start-up expected before September.

Production commenced at the project’s second LNG train in June of this year.

To put some perspective on how operations are ramping up across the two projects, consultancy EnergyQuest estimates Wheatstone produced 2.1mt in the past financial year, after first gas at train one in October.

Capacity at Wheatstone is 8.9mtpa.

At the three train Gorgon project, ramp-up is mostly complete, with 12.7mt of production in the year to June, compared with capacity of 15.6mtpa.

Financial reports by Woodside, which has a 13 per cent stake in Wheatstone, and those for Chevron, can give an idea of the financial performance of the two projects.

That implies Chevron’s operating cost at Gorgon was about $800 million for the calendar year.

As part of that ongoing operational requirement, Chevron has let a series of contracts in the past few months (see table, page 18), including to Wangara-based Ertech for civil services at Barrow Island and WorleyParsons for extension work across three assets.

Applus+ Oceania regional managing director Cameron Waters told Business News that, although it had been a tough market for the past four years, the business had grown market share.

Mr Waters said the company’s work was generally more focused on inspection of operational facilities, although it had also been busy during the construction phase.

ConocoPhillips was active in June contracting for its proposed Barossa development, which would backfill an expected supply shortfall at the Darwin LNG facility it operates.

That shortfall will be created by the depletion of the Bayu-Undan field in 2022-23.

The US-based supermajor anticipates a final investment decision on Barossa by the end of 2019, after the national offshore regulator gave it the tick in March.

In the interim, the company has tapped WorleyParsons subsidiary Intecsea for Barossa subsea work, and has set up a FEED competition between Modec and a consortium of Technip and Samsung.

Similarly, Shell has opened tenders for FEED work on the Crux field, which is intended as a tieback to the Prelude floating LNG vessel.

Prelude is one of only two LNG projects still under commissioning from the past big commodity boom.

A test gas cargo was introduced to the vessel last month, and the company told investors last week it expected start up in 2018.

At the Ichthys LNG plant, contractor JKC handed over the first LNG train to operator Inpex in May.

Production started at its offshore operations in July, with the first gas shipment expected in August or September.

Quadrant Energy group executive subsurface Fred Wehr touted a recent oil find in the Carnarvon Basin at the Dorado-1 well, where the company has an 80 per cent stake.

“We see this as going to be a big deal, Mr Wehr said.

“I hope I’m not overstating this or overselling it but this is something I’ve never seen in a 35-year career.

More broadly, he said the company had one of the top three acreage positions in the North Carnarvon basin.

Quadrant and its predecessor, Apache, had been the most active explorers on the North West Shelf in the past 25 years, Mr Wehr said, with 259 wells drilled at a cost of less than $2 billion.

About 688mmboe was discovered in net terms, he said.

Mr Wehr said when Brookfield and Macquarie Bank bought Apache’s assets, there had been strong internal discussion about capital allocation into exploration.

“I would point back a few years to the LNG boom between 2005 and 2014; there was a lot of money left on the table, we left some of it ... just spending a lot of money on exploration is not a guarantee of good investment,” he said.

“Most of the oil was discovered before 2005; this was driven by the shallow water program around Varanus Island.

“In 2006 we moved into deeper water (and) made the Julimar discovery.

“We were told by Houston to find enough for a third train; we were 20 per cent partners in Wheatstone (at the time).

“The whole mission was to go out and find some more LNG. Trouble is, everybody else was doing the same thing.

“There was tremendous value destruction during this time in exploration because people were pushing too hard.

“And they were all chasing the same things, the volumes were going down, costs were through the roof.”

ConocoPhillips vice-president of exploration and development Frank Krieger said the company spent about $300 million on exploration every year.

“For us, exploration is not a matter of urgency; generally we have a large portfolio.” 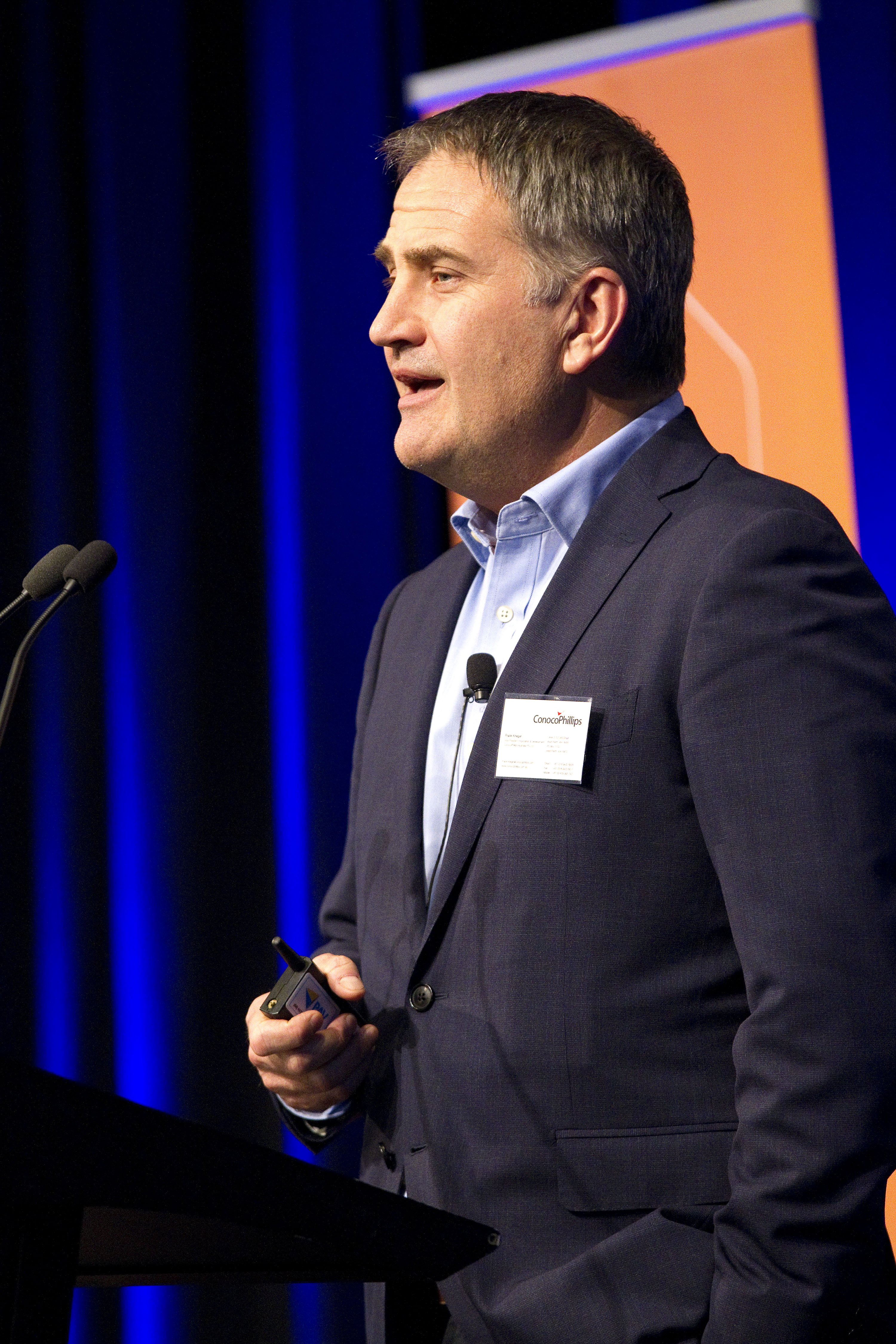 He agreed that companies had pushed too far in the LNG boom.

“ConocoPhillips really took a hard look at ourselves in the last downturn and recognised you can destroy a lot of value in exploration as well as create it,” Mr Krieger said.

The Australian exploration program had been targeted, with a portfolio built within reach of the Darwin infrastructure, he said.

“Having built an LNG plant, you want to keep that running for decades and decades,” Mr Krieger said.

“You can create a lot of value in an ongoing way if you can do smart and targeted exploration.”

After Barossa comes onstream, Mr Krieger suggested that the Greater Poseidon fields in the Browse Basin which include the Kronos discovery, could be next in line.