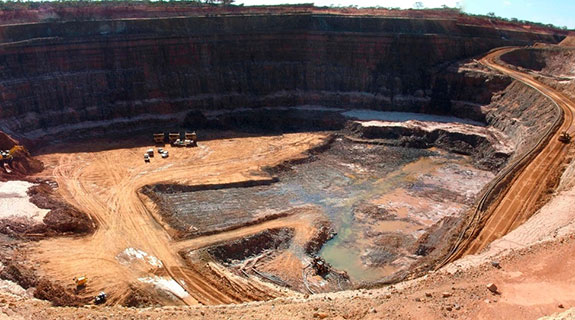 Evolution is buying several of La Mancha's assets, including the White Foil open pit gold mine near Kalgoorlie.

Evolution will acquire La Mancha’s Frog’s Leg and White Foil gold projects, as well as a 1.5 million tonne per annum processing plant, all of which are located near Kalgoorlie, in exchange for 322 million shares.

At Evolution's closing share price of 91.5 cents, the deal is valued just shy of $300 million.

La Mancha will end up owning 31 per cent stake in Evolution, becoming its largest shareholder.

“The La Mancha Australia assets are an excellent addition to our existing portfolio, and exactly the type of high-quality, low-cost producing assets that we have been seeking to acquire.

“They are also located in a highly prospective and strategically important region of Australia that offers significant upside exploration potential.”

Mr Klein said the company has consistently indicated that any acquisition needed to improve the quality of Evolution’s portfolio.

“(The La Mancha assets) clearly ticks that box. It has low costs and a good mine life,” he said.

“Equally importantly is the fact that it is materially less capital intensive than our existing portfolio, and will be a powerhouse of cash generation for Evolution.”

As part of the deal, La Mancha has agreed to provide Evolution with an initial commitment of up to $100 million of additional capital to fund further growth opportunities.

Evolution said La Mancha will have the right to nominate two representatives to its board following completion of the transaction.

“Under the terms of the agreement, La Mancha must ensure that as at the later of June 30 and completion of the transaction, it has outstanding borrowings under its existing debt facilities of no more than $124 million, and a minimum cash and equivalents balance of $10 million,” Evolution said.

Following completion of the deal, Evolution will own six operating assets across WA and Queensland, with gold reserves of 3.4 million ounces and mineral resources of 8.4 million ounces.

Evolution owns the Edna May mine 350km east of Perth.

The transaction is expected to be completed in July.

The transaction follows news last week that La Mancha had signed an agreement to acquire up to 70 per cent of Perth-based explorer Intermin Resources' Binduli gold project, which is located near its Frogs Leg and White Foil projects.

Meanwhile, Evolution said it produced 103,305oz of gold in the March quarter, in line with its forecasts.