Even though gatherings of 100 people are now allowed in WA, events professionals are still struggling to find work. 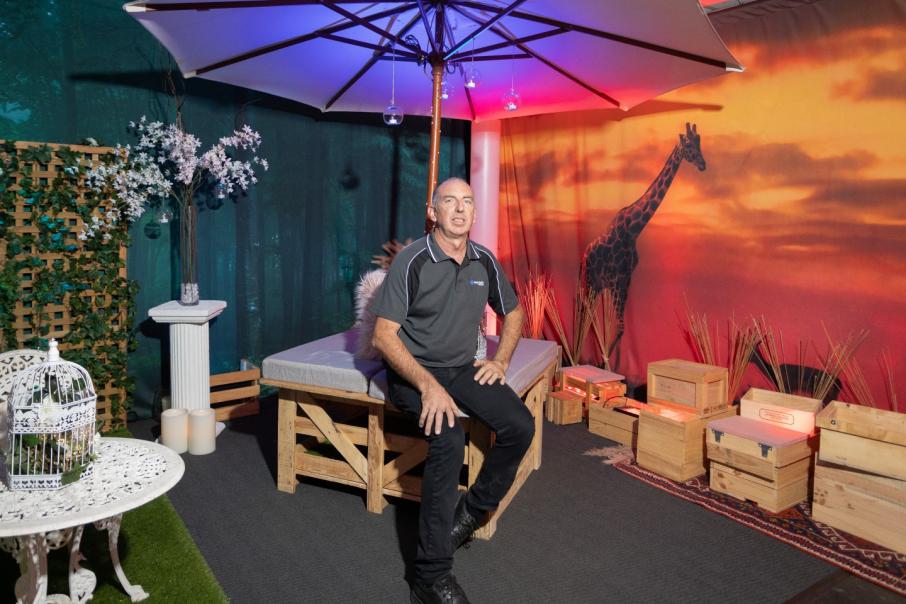 Darren Heath says his business is doing one or two jobs a week, instead of 10 to 15 a day. Photo: Gabriel Oliveira

Even though gatherings of 100 people are now allowed in WA, events professionals are still struggling to find work.

In the week after the federal government banned gatherings of more than 500 people in response to the COVID-19 pandemic, Zaccaria Concerts & Touring promoter John Zaccaria’s bookings vanished.

Months later, he is no more confident of a return to work than when those restrictions were announced on March 13.

Mr Zaccaria’s business organises concerts for audiences of thousands, with past talent including Lionel Richie, John Farnham, and the Hoodoo Gurus, so the 100-person rule announced by Premier Mark McGowan in May has failed to provide any relief to the promoter and his seven employees.

“We are absolutely in the dark with no income [and] no shows,” Mr Zaccaria told Business News.

“We can’t even plan, really, because we can’t commit to anything.

Mr Zaccaria said one of the things he was trying to make obvious to government was the lead time for mass gatherings.

“For concerts, you can’t lift the ban and expect there will be a concert on the weekend; it takes weeks, months, to get these things off the ground,” he said.

Mr Zaccaria said the events industry was seeking to hold events in COVID-safe ways by including features such as hand sanitisation stations, temperature checks, contact tracing, and social distancing.

“The industry as a whole is prepared to make all those changes, which obviously come at an extra cost, but it’s the new norm, it’s going to be with us for a while,” he said.

While the business events industry (excluding festivals and concerts) is estimated to contribute between $2.3 billion and $2.5 billion to the WA economy annually according to a report by EY, Mr Zaccaria said it wanted to be recognised as a standalone sector that was hurting.

“We are not tourism, we are not hospitality, we’re different,” Ms Brennan told Business News.

“We work together, we work hand-in-hand, but we are a separate industry sector. Tourism and hospitality, although it’s still difficult, they are back at work, we are not.”

Ms Brennan said gaining the public’s confidence and trust was the next step.

“What we would really love [is] for the government to perhaps give exemption to a couple of larger events, a couple of large outdoor events that have got a template ready to go to be COVID-safe, so we can measure how these things are going and how it works,” she said.

Ms Brennan runs events of all types, including international concerts, corporate events and outdoor festivals, and she was not able to get back to work yet.

“Regarding the 100-person rule, it’s only working for very small seminars and training events and small weddings; it’s not helping conferences, it’s not helping midsize corporate events or concerts,” she said.

“It’s hard to get sponsors to see the value of smaller events. We would completely understand why it’s been rolled out like it is, but we are looking forward to phase four when things open up much more.”

Stage and Studio Productions managing director Darren Heath told Business News all of his business’s bigger jobs were cancelled in mid-March, and it was now doing one or two small jobs a week, instead of 10 to 15 a day.

“During the closure, we have had a couple of video conferences happen, we did the launch of a building,” Mr Heath said.

He said JobKeeper had helped him keep some of his staff in work, primarily maintaining equipment and tending to a few small jobs.

Mr Heath said the state government’s 100-person rule meant a few smaller events, like training sessions, could be held, but no events of scale.

And some planned events were off the table altogether, he said, because a number of businesses he had contacted to reschedule said they had spent the money elsewhere.

“A lot of the problem we have is budgets,” Mr Heath said.

“There are lots of events not happening because they spent the money in other places.”

Confidence was another issue, he said.

“[They need to know] if they organise an event for October, they will be able to have it,” Mr Heath said.