SPECIAL REPORT: More national and international conventions are choosing to come to Perth, adding a boost to tourism and industry and catalysing a big change at the Perth Convention and Exhibition Centre. 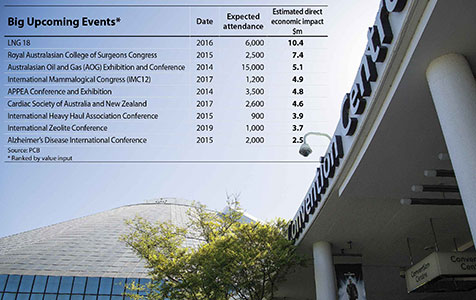 Moves are under way to expand the Perth Convention and Exhibition Centre to meet a growing demand for more and bigger events.

Wyllie Group, which owns the PCEC, is working with its landlord the state government and the manager of the centre, Spotless, to discuss expansion plans which include expanding the centre by as much as 50 per cent.

Wyllie Group executive chairman Wayne McGrath said discussions had started a while ago, and were held up during the state election, but were now continuing as Wyllie sought to dramatically improve its largest property asset. The PCEC is the ranked number 1 in BNIQ's Convention Centres list.

“It’s quite a complicated property in regards to the other stakeholders,” he said.

“We are looking at ways that we can maximise the value of the site and complement what’s happening on the waterfront with Elizabeth Quay. It’s very early days and there’s a lot of red tape and processes we need to get past.

“There are a number of different proposals. It all depends on what approval process we can get. There is land that is available on other areas near the site that we can utilise but there are so many different options we need to canvass with the other stakeholders before we can commit to anything. It’s a fairly long and drawn-out process and we don’t anticipate anything happening in the short term.”

Note: The above events table does not include training events and the attendees figure may include individuals who have attended more than one event.

The PCEC is Perth’s biggest events venue, with 24,000 square metres of conference space and 16,500sqm of exhibition space.

However even this is not big enough for two upcoming conventions and exhibitions.

The Australasian Oil and Gas conference and exhibition, held annually in Perth, started finding the PCEC a tight squeeze two years ago, while international conference LNG18, coming in 2016, was last held at a US venue that had almost twice the capacity of the PCEC.

PCEC general manager Nigel Keen said an expansion would allow the centre to hold more than one large event at a time.

“Good Food and Wine three years ago would have had a 10,000sqm requirement; now they take all 16,500sqm of space, so a domestic event like that now means in that period of two weeks we can’t take anything from a national or international market,” Mr Keen told Business News.

“To maximise space within the centre and actually have growth and economic benefit to the state, the time has come where serious discussions should be taking place for an expansion.”

Crown Perth, one of the city’s largest convention venues, is also marked for expansion as part of the resort and gaming group’s planned hotel development.

In 2013, Crown refurbished its events and theatre foyer area and has announced plans to include additional convention facilities in the Crown Towers six-star hotel development, due to be completed in 2016.

Other additions to the venue market include Perth Arena (opened in late 2012 and featuring at number two in the Business News Book of Lists), and Joondalup Resort, which rocketed up the list from 28th to 9th largest venue after opening its $12 million 500-seat function centre and ballroom, which was an expansion of its previous 200-seat capacity.

Margaret River winery Aravina Estate will get a place the Book of Lists for convention centres when it opens its 200-seat corporate meeting venue in March.

According to the calculations by the Perth Convention Bureau, those attending large conferences or exhibitions in Western Australia spent more than $100 million last year, many of them from interstate or overseas.

The big end of the market is complemented by smaller-scale business events for local audiences, often put on by professional associations and ranging in size from 50 to 1,000 people attending early morning, lunch or evening sessions that fit into busy executives’ lifestyles.

PCB chief executive Paul Beeson, whose organisation works to attract business events to WA, said conferences and exhibitions contributed a great deal to the economy especially via leisure tourism, with many business visitors to the state incorporating mini breaks, especially to Margaret River and Broome.

“Governments are all becoming increasingly aware of the value of business events to their economies, and are funding bureaus like ourselves to capture more of this market,” Mr Beeson told Business News.

He said sectors such as healthcare, resources, and academia that hold conferences in WA received rewards that went beyond direct economic input.

“The benefits to these and numerous other sectors resulting from the face-to-face meetings and dissemination of knowledge that occurs at conferences are, at this point, hard to define,” Mr Beeson said.

“They are substantial. They drive our economy and the need for conferencing, but at this point are immeasurable.”

While some sectors such as mining and oil and gas are drawn to WA because of the state’s large market, other sectors have their pick of national and international locations, so the PCB actively courts what it calls ‘high-yield’ conference sectors.

“The percentage of associations that choose Perth as the host city of their own accord is very low,” Mr Beeson said.

“It’s the bureau’s responsibility to secure conferences for Perth and WA. Without PCB’s targeted marketing, the vast majority of conferences held in WA would be held elsewhere.

“Our strategies have identified and targeted higher-yielding delegates, who will spend more, stay longer and spread their dollar at leisure destinations pre and post the conference throughout the state, not just the metro area.”

Royal Australasian College of Surgeons conferences and events manager, Lindy Moffat, said if it wasn’t for the PCB, the 12 major events her organisation held in Perth during the past eight years would have been lost to the city.

“We receive tremendous support from the bureau. They make it easy for us, like a one-stop shop. We can call them and they will do so much of the legwork and the groundwork for us contacting suitable properties, coming up with creative solutions,” she said.

Ms Moffat said while her delegates always enjoyed Perth’s food and wine, the weather and social activities, without the PCB it would be too hard to continue organising events from her Melbourne base.

“It’s hard for me in the eastern states to get over there are do all of the legwork, but (delegates) love Perth. In the last eight years there’s been a real level of sophistication. Perth is now at the forefront of international cities in terms of events,” she said.

Three of Perth’s big upcoming conventions are from the resources industry, demonstrating how a wealth of market knowledge in the state acts as an important drawcard for attracting national and global players.

A regular on the Perth convention calendar, Australasian Oil and Gas, will hold its international conference and exhibition at the PCEC this February.

The Australian Petroleum Production & Exploration Association, which rotates holding its annual conference at different national cities, will meet again at the PCEC this April.

And coming to Perth for the first time in 2016 will be the international conference and exhibition on liquefied natural gas, LNG18.

The PCB estimates this year’s Australasian Oil and Gas event will directly contribute $5.1 million to the WA economy, making it the most lucrative event on the Perth conventions calendar for 2014.

AOG event director Bill Hare said the conference had grown so much in recent years it now overstretched PCEC’s capacity and its economic impact had risen from $17 million in 2012 to $19 million in 2013.

He said the conference had been held yearly in Perth since 2009 because WA was home to such a significant network of oil and gas professionals.

Up to 85 per cent of the large conference and exhibition’s 15,000 attendees (the exhibition has free entry) come from WA, while 8 per cent are international visitors and 7 per cent come from interstate.

The PCB also expects the APPEA convention will inject $4.8 million into WA’s economy this year via its 3,500 attendees.

APPEA events director Julie Hood said Perth had always been an outstanding location for its national conference, which returns to Perth every three years.

“Most of the industry’s largest players have a presence in WA, along with numerous emerging oil and gas companies and businesses supplying the sector,” she said.

“Any Perth based conference is bound to attract a strong delegate contingent.”

LNG18 is set to be the biggest convention and exhibition Perth has ever hosted in terms of number of delegates and exhibitors, as well as its direct economic impact.

While the PCB’s calculation of direct delegate expenditure of $10.4 million is based on the conservative algorithm it uses for all events, LNG18 conference organiser Arinex has estimated the economic impact will be much greater, at $48 million.

Arinex managing director Roslyn McLeod said this was because the conference was particularly high end.

This will place a large demand on accommodation facilities for the planned 6,000 delegates and exhibitors.

“One challenge that we have is the accommodation, having the inventory in the five-star category, as well as four and three-star, and having that availability and pricing at an acceptable level,” Ms McLeod said.

She said the international convention and exhibition had chosen Perth for its 18th event after Woodside Petroleum championed the location and worked with the PCB and the state government to attract it.

LNG18 has big shoes to fill, however, after its last exhibition in Houston occupied 27,000sqm, almost double the capacity of the PCEC.

While the planned extension of the PCEC may be complete in time, Ms McLeod said Arinex was confident Perth could provide a comparable follow-up to Houston with temporary facilities if necessary.

“Perth Convention Centre is an excellent centre; there’s no two ways about it, it’s a beautiful centre. The city of Perth is a beautiful city to visit so the delegates will leave hopefully with very positive experiences and memories,” she said.

“The challenge that we have is, first of all the centre not being quite big enough; it does require an extension with temporary facilities (but) we’re capable of making all that happen and pulling off a really first-class event.

“One doesn’t know what 2016 will bring because the market has changed radically in the last 18 months in Perth and it’s more in favour with what we need now than it was when we won the bid back in November 2010.”