Even the strong get hurt sometimes

Cost wins out above all other considerations in the search for efficiency, which is why a strengthening US dollar could pose challenges for Caterpillar. 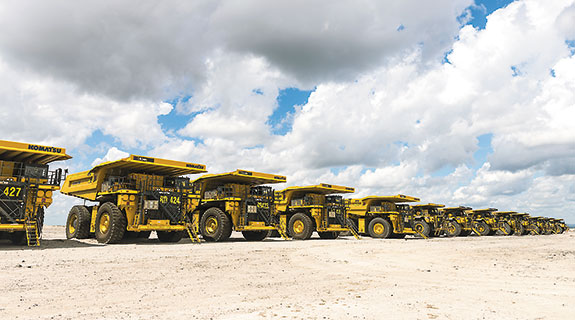 READY TO FIRE UP: Japanese yellow goods are becoming more cost-competitive as the $US strengthens. Photo: iStockphoto

Cost wins out above all other considerations in the search for efficiency, which is why a strengthening US dollar could pose challenges for Caterpillar.

Komatsu, Airbus and BMW might not seem to have much in common – with one making heavy earthmoving equipment, the other making aircraft and the third making luxury cars – but what they do share is a growing love of Australia.

Those Japanese and European businesses aren’t getting closer to Australia due to rising sales of their various products in the sluggish Australian economy, but more because they know that, over the next few years, they are going to knock US competition out of the Australian market.

Exchange rate changes are what will hit US manufactured goods in the Australia market, leaving the way open for competing Asian and European products.

Komatsu, for example, makes a range of equipment identical in almost every aspect to the range made by Caterpillar of the US. Airbus mimics Boeing, and BMW makes cars that are better in most respects to anything coming out of the US.

The comparatives continue across most product lines, including food, clothing and computer software. Whatever the US makes there is almost certainly a rival product from another country which, over the next 12 months, will become more appealing as the US product becomes more expensive for anyone shopping with Australia’s weakening dollar.

The common thread linking everything is the strength of the US economy, which has emerged as one of the world’s few bright spots as its manufacturing heartland enjoys the benefits of cheap energy, cheap money, and relatively cheap labour.

Good times, as Australia experienced during the mining boom, have a dramatic effect on the value of a country’s currency, which is why the US dollar is soaring against every other currency in the world, including the Australian dollar, the euro, the yen and the currencies of South Korea and China.

Those currency changes are the precursor to interesting times, as can be seen in the beneficial effects on Australian exports. Even as prices for farm produce and most minerals remain largely unchanged, or have fallen in US dollar terms, they’re rising in Australian dollars.

Gold is the classic benchmark. It has risen modestly during recent few weeks in US dollar terms, and rocketed straight through the $A1,600 an ounce mark on conversion, thanks to the Australian dollar exchange rate dropping through US80 cents, with US70 cents the next target.

The flipside of this good news story for Australian exporters is that companies relying on US manufactured goods face a challenge – do they stick with the product that their customers have grown used to, or start shopping around for a comparable European or Asian offering?

Any car dealer trying to sell US vehicles will already be finding European, South Korean, Japanese and Chinese cars are eating into his market.

In Western Australia (and its important mining sector), the battle between US and Asian equipment manufacturers of most interest will be Caterpillar versus Komatsu, with pressure mounting on the local Cat dealer, WesTrac, as the Japanese company knocks on the doors of Cat’s best customers with offers that might be too good to refuse.

An example of what’s happening occurred last October, before the latest upward surge in the US dollar, when Komatsu executives made a pitch to BHP Billiton for the heavy equipment contract.

According to analysts from the investment bank, JP Morgan, who had been touring BHP Billiton’s WA iron mines, Komatsu’s salesmen were given two pieces of advice.

Firstly, that ‘BHP Billiton is not committed to one supplier’ – a comment that apparently applied to the Caterpillar 793 haul truck (of which it operates more than 200 in WA).

Secondly, if Komatsu can make a product that is 10 per cent more efficient than the Cat 793, then BHP Billiton would consider ‘a full change out’.

‘Efficiency’ is an interesting test nominated by BHP Billiton, because while it might seem to apply to tonnes moved per hour, there is also the question of what it costs to shift each tonne – and that calculation must include the capital cost of the equipment.

With a price tag of around $5 million per truck, the BHP Billiton contract is a potential order for Komatsu worth $1 billion; or, looked at another way, a potential loss for Caterpillar and WesTrac of a $1 billion order.

Obviously business is never that simple. Exchange rates vary, quality of equipment is critical, as is after-sales service and an immediate supply of spare parts, which is something WesTrac does very well.

Boiled down, the number that really matters to a buyer of equipment, especially in tough times, is the price tag and if the US dollar keeps rising (which seems likely) and other currencies (such as the yen) keep falling, then BHP Billiton and other big miners could soon be operating fleets of Komatsu equipment or possible Chinese gear such as that made by XCMG.

Through the worm hole

AUSTRALIA is not alone in a world that is looking increasingly like it deserves a chapter in a rewrite of Lewis Carroll’s classic, Alice in Wonderland.

Not only are currency values boosting some economies and hurting others, stock market values are becoming increasingly disconnected from reality.

Locally, one of the best examples is Woodside Petroleum, which is trading on a dividend yield of close to 7 per cent (double bank interest and better than bank shares), with investors appearing to not believe that Woodside can continue to deliver the rich rewards it has for the past few years.

Internationally, a more astounding example is a calculation that British shares are now the cheapest they have been in the past 100 years.

That calculation is based on a comparison of equities with government bonds (gilts).

US investment bank, Citi, arrived at the equities versus gilts comparison by measuring average dividend yields, which are over 3 per cent, with the British 10-year bond yield, which is down to 1.5 per cent, a gap that beats anything seen in two world wars and The Great Depression.

GLIMMERS of hope for WA’s mining sector are starting to appear in commodity price forecasts; and while volatility will be the key theme for the rest of 2015, Citi reckons that metals such as copper and nickel could be looking at a V-shaped recovery – down fast and then up equally quickly. Fingers crossed.