The Eurozone is showing signs of economic improvement as stimulus measures begin to bear fruit. 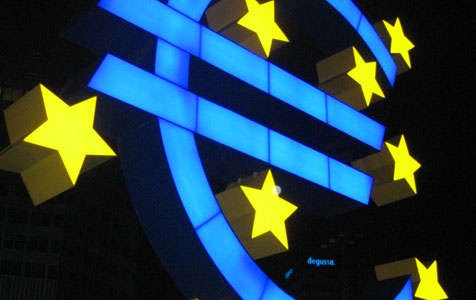 The Eurozone is showing signs of economic improvement as stimulus measures begin to bear fruit.

Europe has been getting its act together and the latest stimulus measures by the European Central Bank this month add to confidence its recovery will pick up pace, which is good for global growth.

But one risk is that the search for yield by investors will delay further falls in the value of the Australian dollar, which has moved higher over the past few weeks.

Since the high point of the Eurozone crisis in 2012, Europe has been fading steadily from the headlines as the risk of a break up in the euro diminished and troubled peripheral countries started to get their public finances under control.

Quite clearly, the combination of various bailouts, Eurozone leaders focusing on “more Europe, not less” and the efforts of the ECB president Mario Draghi to “do whatever it takes to preserve the euro” backed up by various monetary programs have been successful.

This is evident in a collapse in bond yields in peripheral countries and a return to economic growth across Europe.

However, with the ECB providing another significant round of monetary stimulus, what does this mean for Europe, global growth and for investors?

Signs abound that the Eurozone has left the crisis behind. Thanks to austerity programs and more recently a return to economic growth, budget deficits are coming under control in the main crisis countries such as Italy, Spain, Portugal, Ireland and Greece (see graph).

Spain is a laggard, but the average budget deficit in these countries will be around 4 per cent of GDP this year, down from 10 per cent-plus a few years ago.

Greece, Italy and Portugal are on track to run primary budget surpluses (that is the budget, excluding interest payments) this year.

Economic restructuring is starting to bear fruit. One guide is unit labour costs, as it reflects both productivity growth and unit labour costs. This is an indicator of competitiveness, particularly across countries with a common currency as is the case in the Eurozone.

Italy and France have been the laggards on the economic reform front, with rising labour costs, but Spain and Portugal have made significant progress in reducing costs, particularly relative to Germany.

Reflecting the return of investor confidence, once it became clear the ECB was not going to allow a break-up in the euro, bond yields in the crisis countries have collapsed to pre-crisis levels or below. In fact, Spanish and Italian 10-year bond yields have fallen to record or near-record lows.

Finally, confidence and business conditions have improved across the Eurozone and this has seen a return to growth, including in the crisis countries.

In fact, the improvement in Greek confidence levels is quite astounding given where it was a couple of years ago.

Not out of the woods

However, Europe is not completely out of the woods yet. While confidence and business conditions have picked up, growth remains gradual (at just 0.9 per cent over the year to the March quarter).

Unemployment has only fallen slightly from its peak of 12 per cent to 11.7 per cent, inflation is just 0.5 per cent year on year, money supply is growing at just 0.8 per cent and bank lending contracted 1.8 per cent over the year to April.

This has led to concerns the Eurozone might be sliding into a Japanese-type scenario of low growth and deflation.

To head off this risk the ECB has unveiled another round of monetary stimulus. While much anticipated, as the ECB had been foreshadowing a move for some time, it did not disappoint.

The key measures deployed include cutting its key interest rate to just 0.15 per cent, cutting the rate of interest banks receive on excess deposits at the ECB to -0.10 per cent, an extension of guidance as to how long rates will remain low.

The ECB has more than met market expectations as reflected in the 2.3 per cent rally in Eurozone shares and the collapse in bond yields in Spain, Italy and Greece since the announcement.

What’s more, the scatter gun approach of deploying virtually everything at once adds to confidence that the whole should be worth more than the sum of the parts in terms of its impact on the economy.

It also adds to the ECB’s credibility and confidence that it is determined to get the economy on to a stronger path.

Finally, there are signs the wind-down in bank lending in Europe that has occurred in the run-up to this year’s review of the quality of the banks’ assets and stress tests of their capital, has run its course.

If so, the ECB’s measures aimed partly at boosting bank lending have a good chance of succeeding.

The bottom line is that the ECB’s measures – and commitment to do more if needed – add to confidence that the Eurozone economic recovery will pick up pace over the year ahead and that deflation will be avoided.

There are several implications for investors. First, the determination of the ECB to put Europe on to a stronger growth footing and the easier monetary environment in Europe is positive for Eurozone equities, which remain relatively cheap.

Second, the ECB’s actions are likely to maintain downwards pressure on peripheral country bond yields but, given they are historically low, particularly because of the still high debt levels in such countries, this trade is becoming risky.

Third, the ECBs actions provide further support for the global “carry trade” that involves borrowing cheaply in low-yield countries like Europe and putting the proceeds into higher-yielding countries and assets.

As a result, the chase for yield looks like it has further to run. This is supportive of corporate debt and high-dividend paying shares.

Fourth, and related to this, the reinvigoration of the carry trade risks delaying the next leg down in the value of the Australian dollar, as global demand for high-yielding investments like those in Australia remains strong.