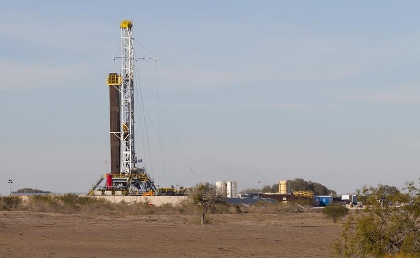 Drilling at the Sugarkane prospect by Aurora at Eagle Ford, Texas.

Eureka Energy says Aurora Oil & Gas has no grounds to withdraw its takeover offer, despite the suitor admitting its lawyers were looking at the possibility of dropping the bid over concerns with a $US50 million finance facility Eureka has lined up with Macquarie Bank.

Eureka announced yesterday it had executed documentation with Macquarie for the finance facility, to underpin its drilling and exploration operations at the Sugarloaf prospect, in the Eagle Ford shale gas region in Texas.

Shortly after that announcement, Aurora raised its concerns over the terms of the facility, saying its lawyers were examining the company’s options, but it had not yet made a decision on whether to back out of the bid.

The suitor said it was particularly concerned with the possible grant of options and a “make whole payment” of $3.75 million, payable to Macquarie on drawdown of the initial $15 million tranche of the loan.

Eureka fired back at Aurora today, calling its claims “vague and inaccurate” and “disingenuous”.

The suitor said it had advised shareholders that the possible grant of options to Macquarie would be a component of the debt facility in February, when it first announced its intentions.

Eureka also said Aurora got its numbers wrong, with the first tranche of the facility to be $US9 million and the make-whole payment $2.25 million, refundable if shareholders approve the grant of options.

“Eureka reiterates its belief that Aurora has no grounds on which it could unilaterally withdraw the offer, and whilst the board continues to recommend that Eureka’s shareholders reject the offer, the board will continue to work vigorously to preserve shareholders optionality and protect all their rights,” the company said in a statement.

Aurora made the 45-cents-per-share offer for all the stock it does not already own in Eureka late last month, looking to consolidate the two companies' Eagle Ford shale gas landholdings.

Eureka told its shareholders to reject the bid, calling it opportunistic and claiming it undervalues the company.