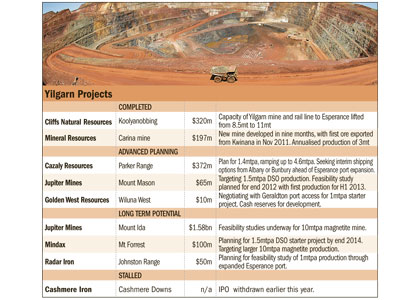 IRON ore producers in the state’s Yilgarn region are not immune from the hurdles facing producers in the Pilbara and Mid West – port capacity and access issues, transportation and infrastructure – but the state government’s intention to expand Esperance port could pave the way for the region to become a major iron ore province.

International company Cliffs Natural Resources is the only producer currently exporting iron ore through Esperance; it’s been operating its Koolyanobbing mine north of Southern Cross in the Yilgarn for almost 10 years.

The company has just completed an expansion worth $320 million to add a further 3 million tonnes to its production, bringing the total to 11mtpa.

The investment also paid for upgraded rail and port facilities, which were all completed within the planned timeframe and on budget.

The miner long ago secured port capacity at Esperance for its total production – good news for Cliffs but not so good for anyone else, since 11mtpa is the port’s current capacity.

Cliffs’ neighbour, Mineral Resources, has found a solution by shipping product via the Kwinana port.

The company produced its first 1mt of ore late last year, after having the $197 million Carina mine commissioned in only nine months, and has a licence to export a further 3mtpa through Kwinana.

Cliffs, Mineral Resources and other hopeful producers formed the Yilgarn Iron Ore Producers Association to collaborate for improved infrastructure – the focus of which is the Esperance port expansion.

The state government has committed to facilitating a private sector-funded project to enable exports of up to 30mtpa.

Cliffs vice-president Asia Pacific iron ore, Colin Williams, said the company would also help facilitate the expansion despite it not being of significant benefit to the company.

“For the foreseeable future, our current capacity and set-up for the port will suffice; we aren’t looking at this point to expand our capacity any further so we’re quite happy with what we’ve got,” Mr Williams told WA Business News.

“(But) we have an interest in understanding what’s happening and ensuring what happens is the best for the industry.”

The expansion plan is welcome news for Cazaly Resources, which claims its $372 million Parker Range project can begin production as soon as a route to market is confirmed.

The company signed a capacity reservation deed with the Esperance Port Authority to export 5mtpa via the expanded facilities.

To safeguard against any delay in the Esperance expansion, however, Cazaly has appointed a project manager – Engenium – to explore other potential export options such as Bunbury or Albany.

Golden West Resources is also well advanced in its Wiluna West project and has mining approvals to produce 1mt of hematite per year.

Executive general manager Craig Ferrier said the company was in discussions about gaining port access at Geraldton, but that option involved trucking product 800km and was becoming less attractive.

“When the iron ore price was higher we were certainly exploring options to transport from Wiluna to Geraldton and to get some trial shipments under way … the recent decline in the iron ore price doesn’t provide a great deal of encouragement for that  option,” he said.

Mr Ferrier said he would prefer to ship ore through Esperance and would be ready to start production once that expansion was completed.

The situation is similar to that in the Mid West, with projects there stalled while negotiations around Oakajee infrastructure make little progress.

The difference in the Yilgarn is the Esperance port expansion is much cheaper, and therefore less likely to incur such lengthy delays in securing funding.

The anticipated cost of the project is up to $600 million.

One factor working in the Yilgarn miners’ favour is ready access to the state-owned railway, much of which has already been upgraded to accommodate Cliffs’ tonnages.

A number of private companies are said to have thrown their hats in the ring for the expansion deal and progress now rests with the Esperance Port Authority.

The authority expects to advertise a ‘request for proposal’ early next year with a view to selecting the preferred proponent by the third quarter of 2013.

Most miners operating in the region are confident increased port capacity will be achieved by 2015 at the latest, and are planning for first production to coincide with that date.

Jupiter has forecast Mount Ida will cost about $1.58 billion with the potential to produce 10mtpa, but any further progress depends on the outcome of the current feasibility study.

Smaller players Mindax and Radar Iron are also planning to both have their projects come on stream around the same time as completion of the port expansion.

Another advantage was Radar’s plans to ease into production with only 1mtpa.

“I would hope we’d have approvals to mine in 2014, and I suspect the port will be expanded by that time; there’s definitely goodwill on both sides so I think there’s half a chance that it will happen.”

Mindax is taking a similar tack by first developing a lower-cost hematite resource before moving on to a magnetite project once cash flow is achieved.

The company has forecast spending about $100 million on a feasibility study and construction of its Mt Forrest project, with a target of first production in 2014.

Managing director Steve Ward said the amount of activity already occurring in the region could be an indication of what’s to come.

“Already there’s certainly a lot of iron here and a number of producers have got resources that are quite substantial; we have 1.7 billion tonnes and there are still areas of the Yilgarn that are not fully explored,” he said.