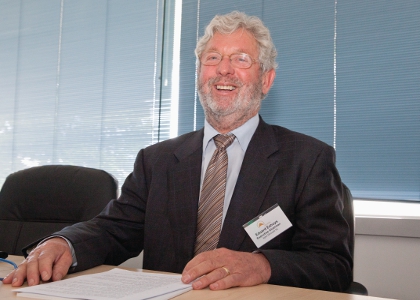 Apex Minerals executive chairman Eduard Eshuys has stated confidence in the company’s ability to turn its flagship Wiluna project around and raise necessary funding to keep it running.

Mr Eshuys was appointed as part of a new board structure in April, and told WA Business News the fresh team had made significant headway in improving the company.

“It wasn’t just catching up with payments that had to be made, but the equipment needed to be replaced as well and that was across the board…that’s why it’s been difficult.”

At the company’s AGM held this morning Mr Eshuys fended off questions about the high cash costs from the Wiluna mine, which has at times peaked above the amount being paid for an ounce of gold.

“There are two ways to reduce the cost per ounce; one is to increase the number of ounces produced and the other is to focus on the actual cost of production and we’re doing both,” Mr Eshuys told shareholders.

“With the actual cost of production we can see improvements of one million dollars a month possible, and they will occur over the next three to four months.

“That is still the target as such; it not a forecast but it’s a target…obviously if we achieve that it will be good for shareholders.”

The company has struggled to raise capital in recent months – falling short of a target to raise up to $8.86 million and a minimum of $6 million through a non-renounceable rights issue to existing shareholders, priced at 8 cents per share.

But Mr Eshuys told WA Business News he was confident investor sentiment would improve once the cost of production decreased.

“I’m very confident that we’ll get over the $6 million, and depending on market sentiment I think we’ll be able to raise the balance by January.

“(The high costs) are a concern, and the only way to fix that concern is to deliver on reducing the cash costs. You can talk about it until the cow come home…(but) investors are going to wait until they see an actual improvement in cash costs.”

Mr Eshuys also indicated a sale of Apex’s other project – Youanmi – was likely in the coming months and the revenue gained used to either pay off debts or as working capital.

Apex is also still locked in a court battle with former managing director and chief executive Mark Ashley, who is claiming payment of $497,592.

The company has lodged an appeal to the Court of Appeal.