WA business leaders have bemoaned the state government’s failure to plan for life beyond the mining construction boom, but still see opportunities in other sectors. 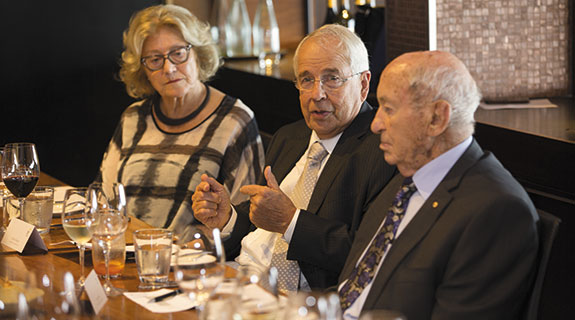 WA business leaders have bemoaned the state government’s failure to plan for life beyond the mining construction boom, but still see opportunities in other sectors.

Austal chairman John Rothwell was surprisingly quiet this week when discussing the recent flurry of defence projects announced by the Turnbull government.

While pleased to win the work, it will make only a modest contribution to Austal’s turnover.

“In the scheme of things, it’s not all that big for us,” Mr Rothwell told a lunch gathering with eight winners of EY’s Entrepreneur Of The Year Champion of Entrepreneurship award.

The big game for Austal is the US, where it has 4,500 staff and generates 80 per cent of its revenue.

“We’ve done well in the US, we’re now the third largest defence shipyard in the US,” Mr Rothwell said.

He believes the Western Australian government could have done more to secure defence work.

“I’m somewhat critical of the Western Australian government insomuch as they were not active when we were booming with the mining industry,” Mr Rothwell said.

“Look at South Australia; admittedly they didn’t have much else going for them, they worked very hard to attract defence work.”

Mr Rothwell said governments should ensure Australia derived maximum benefit from the construction of a new submarine fleet, which will be overseen by French company DCNS.

“I do hope, and I think they should, have an Australian partner,” he said.

“The technology on the submarines should be resident in Australia so we can service them.”

The lack of planning for life after the mining construction boom was a theme echoed by other speakers, including Janet Holmesà Court.

“I think our government forgot there would inevitably be a slowdown like there is now,” Mrs Holmes a Court said.

“They forgot to think about what we can do here.”

Coogee Chemicals director Gordon Martin said the focus on LNG export projects, both in WA and Queensland, was driving up the cost of gas for manufacturers.

“That just destroys Australian manufacturing for the sake of three ‘vacuum cleaners’ sucking all the gas out of the east coast,” he said.

Mr Martin said despite the challenges, the company was continuing to pursue value-adding opportunities.

It has spent $20 million over the past eight years on a project with the CSIRO to produce titanium powder, which is the feedstock used in 3D printing.

“The project has got to a point where we are now looking at a five tonnes a day plant in Kwinana,” Mr Martin said.

“When things are going well, they don’t even think about it,” Mr Martin said.

“We get zero support. The government is ignorant.”

Mr Cullity is the major shareholder of Wesbeam Holdings, which has invested $115 million in a laminated veneer lumber plant at Neerabup in Perth’s north.

The business lifted sales to $82 million last year and is anticipating higher sales this year.

“Manufacturing has a future but it’s selective,” Mr Cullity said.

“Wesbeam is the last remaining producer of LVL in Australia.

“We’ve found by paying attention to what we’re doing and getting our costs down that the business has improved.”

A recent innovation that has helped the business is the use of karri thinnings in combination with pine, which was its main feedstock, to produce a high-strength beam that is superior to imported competing products.

“Manufacturing is similar to what BHP and Rio are doing; it’s about getting unit costs down and making sure you have positive cash flow, and increasing your product range and geographic range,” Mr Cullity said.

“Those of us who have stayed in manufacturing need to work out where our market is.

“We have got a good market Australia wide.

“In WA we are fortunate that back-loading rates for many years have been about half the cost of bringing products in.”

Navitas chief executive Rod Jones was positive about his sector.

Mr Jones said it had taken people a long time to work out the value of international education, but it was now recognised as the country’s third largest export, worth $19 billion.

“Both major parties have committed to try and double the number of international students in Australia by 2025,” he said.

His investments in shopping centres, including a 50 per cent stake in the Galleria centre in Morley, are doing well.

“We’re in a growth area, all our shopping centres are doing well, we’ve got expansion plans for $800 million around Australia,” Mr Perron said.

“I’ve been in shopping centres about 45 years and it’s been a wonderful investment.”

In contrast, his Toyota business is mixed, with motor vehicle sales in WA down about 10 per cent but the rest of the country up around 5 per cent.

The downturn in WA reflects the slowdown in mining construction projects. Mrs Holmesà Court, who is chair of the WA Symphony Orchestra, said the slowdown had affected arts companies.

“It’s making it more difficult to get sponsorship,” she said.

“We’re fortunate we have companies like Wesfarmers, who are absolutely committed to looking after arts companies.“

Mrs Holmesà Court said the support from companies including Wesfarmers and EY reflected the view that a healthy city had a healthy arts community.

The support from international companies was varied.

“The Japanese companies are very loyal and take a long-term view, unlike some other international companies that are fair weather friends,” she said.

“I’m constantly asked if there are any companies that make anything, that manufacture things,” she said.

“It’s always been a sadness to me that nobody in WA makes anything here.”

MG Kailis Group co-founder and matriarch Patricia Kailis shared this concern. “You have to make something, you have to do something to make money,” Mrs Kailis said.

“You need some positive and meaningful effort.”

“Our biggest business is a joint venture in China and that looks like it will be a big business going forward,” Mr Clough told the lunch.

“Their market is so big, it’s almost incomprehensible.”

“They are singularly uninformed about how our western system works,” Mr Clough said.

“When they come out here they need help; they find it hard to adjust.”

The entrepreneurs attending the lunch said it was still possible to find new opportunities.

“It’s a matter of thinking laterally in your own sector,” Mr Martin said.

“It’s your industry knowledge and your skill set that allows you to see the opportunity.”

Similarly, Mr Jones said he focused on industries he was familiar with.

“I’m always looking for lateral opportunities, but in the space I understand,” he said.

“The minute you go outside your space, that’s when you create additional problems.”

“I see tremendous opportunities in the VET sector.

“At the moment the system is just not working and there is real frustration in industry about the ability of Tafe graduates.”