Several WA hospitals are experimenting with engaging and interactive art programs that could increase patient wellbeing. 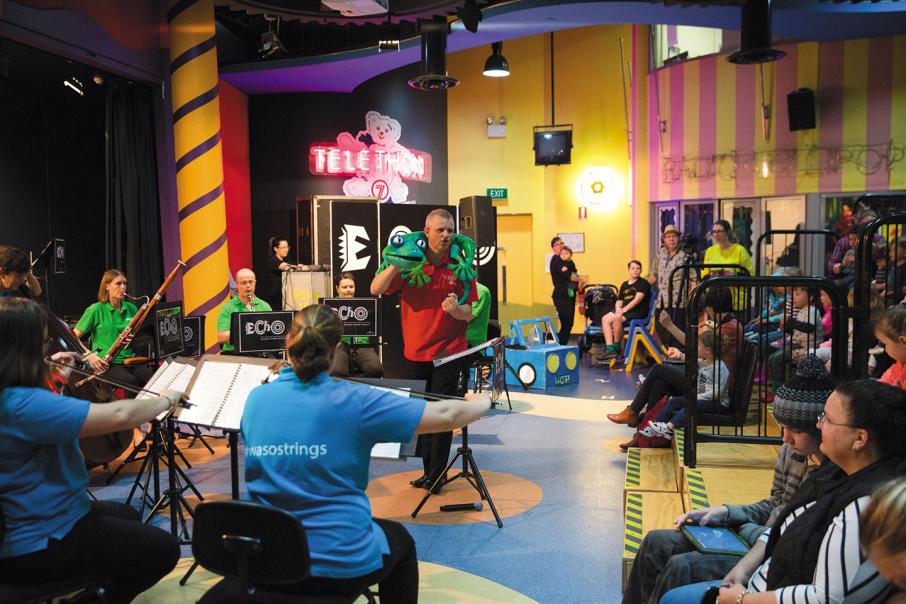 Several WA hospitals are experimenting with engaging and interactive art programs that could increase patient wellbeing.

Consumer choice has emerged as a leading policy driver in healthcare, with reforms such as the Aged Care Approvals Round and National Disability Insurance Scheme shifting service delivery decisions from health providers to customers.

The hospital setting is no different, according to St John of God Healthcare coordinator arts and health Deborah Pearson.

“One of the things hospitals are particularly concerned with right now is patient experience,” Ms Pearson told Business News.

“It’s not just about the right medical technicalities; it’s about creating a good overall experience while in hospital.”

And Ms Pearson said becoming involved in the arts was a good way of achieving that. Encouraging patients to create works of art, for example, was one form of arts engagement provided for those at SJOG’s ‘restorative unit’ at Mount Lawley via the CARTWHEELS program, she said.

University of Western Australia school of population health researcher Christina Davies said although the existence of the arts in hospitals was nothing new, the delivery of art was evolving.

“Art in hospitals has always existed – paintings on walls, good hospital designs, those concepts have been around for a while now,” she said.

“But this idea of arts engagement is starting to gain a bit more weight.”

Dr Davies said arts engagement included a range of everyday activities, such as listening to music, painting, reading, or watching a movie.

“When we ask people why they engage in the arts the first thing most say is that it makes them happy,” she said.

Unlike the role of sports in health, which had 80 years of research behind it, arts and health as a field was relatively new, having started in the 1990s.

As a result, Dr Davies said finding links between arts and health and proving causality was only starting to evolve.

“We’re at a starting point of people realising that what they are doing is arts and that there are these linked positive mental wellbeing outcomes,” she said.

“People get art therapy but they’re not making the link between arts and engagement in everyday life.”

Dr Davies was lead author of the first study to internationally quantify the relationship between mental health wellbeing and arts engagement.

The study found that just two hours of engaging in the arts for enjoyment, entertainment or as a hobby was associated with good mental wellbeing.

Last year, Dr Davies collaborated with St John of God on its three-month creative arts pilot project at a mental health ward with patients over 65 years.

The project, now known as CARTWHEELS, is a mobile studio run by an artist-led team of volunteers.

Patients are encouraged to experiment with a range of supplies and art techniques in a group setting or private room, depending on mobility.

Pre-workshop surveys revealed 59 per cent of respondents indicated they felt happy, which jumped to 85 per cent after the workshop.

“And in terms of staff, they (95 per cent) thought the project supported patient healing and recovery.”

The project has continued at SJOG’s mental health ward at Mount Lawley, with expansion to other locations under way.

St John of God plans to implement the initiative nationally, at its Geelong hospital, during October.

Meanwhile, patients at Princess Margaret Hospital have also been treated to an evolving arts engagement program.

She said the participatory programs had become more successful due to the increase in collaboration with PMH personnel.

Programs it delivers throughout its six visits a year include performances from its education chamber orchestra, composition-based creative workshops, a puppet story-telling show, and Christmas concert.

Performances are also broadcast throughout the hospital on the Starlight Children’s Foundation ‘Starlight TV’, while musicians also play at patients’ bedsides.

“It is a gift for our musicians to share their music in this setting,” Ms Lake said.

“Families and patients are often vulnerable in a hospital setting; our visits provide emotional relief and an engaging distraction from the daily routine and stress.

“We know that our program makes a difference in the lives of children and families we meet when we visit.”

Ms Lake said WASO collated and assessed feedback after each visit and encouraged patients, family members and staff to complete a survey that assessed how the program made them feel and included open-ended questions for
further feedback.

The WA Arts and Health Consortium released a report earlier this year that mapped out current levels of activity in clinical environments across the state.

It revealed that, while 75 per cent of the 60-plus hospitals surveyed delivered arts and health activities, only 28 per cent reported that those projects were evaluated for outcomes.

“It’s important we’re not just spending health dollars on a nice idea, but on things that are going to have an impact and provide good health outcomes.”

Ms Pearson said the report also outlined the need for policy development and improved coordination to promote arts and heath practice, as projects were often run on an ad hoc basis.

“In some places not much more is done than just sticking art on walls, but there’s other art forms,” she said.

“More patients and staff can be actively engaged as makers themselves, not just audience members or viewers.”