The Swan River provides a unique opportunity for WA’s tourism industry, but operators say efforts to expand their businesses have been stymied by red tape and bureaucracy. 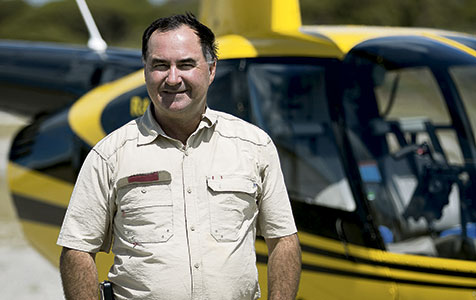 By his own admission entrepreneur Mack McCormack is just a grown-up boy with a lot of big toys.

Luckily for visitors to Western Australia, however, Mr McCormack is willing to share.

The Perth-based multi-millionaire, who made his fortune establishing national safety equipment manufacturing business SafeRight, has spent millions of dollars over the past two years accumulating assets to establish Catalina Adventures – a new adventure tourism business operating from Barrack Square.

He has since bought two helicopters, a pair of ex-SAS commando boats, an amphibious car, an amphibious bus, and two seaplanes, all in the hope of adding to Perth’s tourism offering.

The plan is to run helicopter tours to Rottnest Island from the city helipad near Trinity College, as well as Catalina seaplane voyages taking off from the Swan River (west of the Narrows Bridge) to Dunsborough, Geraldton, the Abrolhos Islands, Broome and Ningaloo Reef.

The boats will be used to transfer customers to the planes, as well as for snorkelling tours to Rottnest, while the amphibious vehicles will transfer VIP customers from their city hotels to the helipad, via the river.

Despite Mr McKormack’s significant investment, however, Catalina Adventures is yet to run a single helicopter or seaplane tour.

The tours have been tripped up by two regulatory authorities – the Metropolitan Redevelopment Authority and the soon-to-be wound up Swan River Trust – despite solid support for the plans from the Tourism Council of Western Australia and Deputy Premier Kim Hames.

Mr McCormack told Business News he applied to the Swan River Trust in October last year to land seaplanes on the Swan, in an area previously approved by the state government for that use.

After 12 months of inaction, the trust finally gave the go ahead for noise monitoring trials, which will take place this week.

While there is light at the end of the tunnel for the seaplanes, Mr McCormack’s plan to establish helicopter tours is not as far advanced.

He said the MRA believes the city helipad is no longer operational, due to its close proximity to the Queens Riverside redevelopment area.

The Civil Aviation Safety Authority, however, still recognises the helipad as an appropriate place to launch and land helicopters.

Mr McCormack said the situation was a demonstration of a bureaucratic hiatus between regulatory authorities.

“From a governance point of view, Perth seems to be the city that said ‘no’,” he said.

“For any given project it seems the government departments, and the people in these departments, have an unofficial policy to drag out the approvals process to the point where you either give up in frustration, or you just go broke.

“That process appears to be about two years.”

And Mr McCormack is not alone in his frustration.

The most recent entrant to base its tourism offering around the Swan River is Segway Tours, which launched its first excursions on the river foreshore just more than a fortnight ago.

Segway Tours owner and operator Owen Williams said the Swan was the logical place to launch his business, which he runs in partnership with his sister, Belinda Hill.

Mr Williams said the genesis for the idea came when he came across the two-wheeled personal transportation devices while on holiday in Washington DC.

“As soon as I saw it, I just knew I had to bring it back to Perth,” Mr Williams told Business News.

But he was soon to discover that establishing a tourist operation in WA is not that simple.

He said when he first presented a Segway to officials from the Department of Transport in 2007, they didn’t know what to do with it.

The approvals processes to use the vehicles in WA took about six years, culminating with the passing of legislation in April allowing for their use for tour purposes on approved cycle ways.

“The Segway fits into a grey area which we had to define,” Mr Williams said.

“So now that the legislation is through, it is now classed as an electronic personal transporter, which is a new definition of a vehicle.”

The wrangling didn’t stop there. The Segways still had to be approved for use by local government authorities, and so far the City of Perth is the only one to have come to the party.

Negotiations with the City of South Perth and the Town of Nedlands are continuing, so more destinations can be added to the tours, with other locales to be added in the near future.

Another business to run into a bureaucratic barrier is About Bike Hire, situated on the river in East Perth, at Point Fraser.

The privately owned hire business, which has been renting bicycles, kayaks and quad bikes to tourists and school groups for the past 19 years, has a simple issue – it doesn’t have enough signage to direct customers to its location.

Because Point Fraser is a Class A Reserve, About Bike Hire is not authorised to install signs to advertise its business, a reality manager Scott Pryer said was a major inhibitor to growth.

“We have a lot of people who ring us from the car park unable to find the shed,” he said.

“The other thing for us is if they put in a kayak launching ramp, that would help everyone. This is an area designated for kayaking, but there’s no ramp.

“But that always falls between so many state or local government authorities and it just gets bogged down.”

Tourism Western Australia chief executive Stephanie Buckland told Business News her agency was always keen to see more activities on the Swan River, but she did acknowledge that red tape and bureaucracy was holding the industry back.

“They want to things happen, it’s just about trying to do that within the framework that we have.”

Disclaimer: The reporter travelled to Rottnest Island as a guest of Catalina Adventures.