Perth could be home to the world’s first 3D bioprinted heart thanks to a new engineering program launched last month, focused on technological solutions for medical problems. 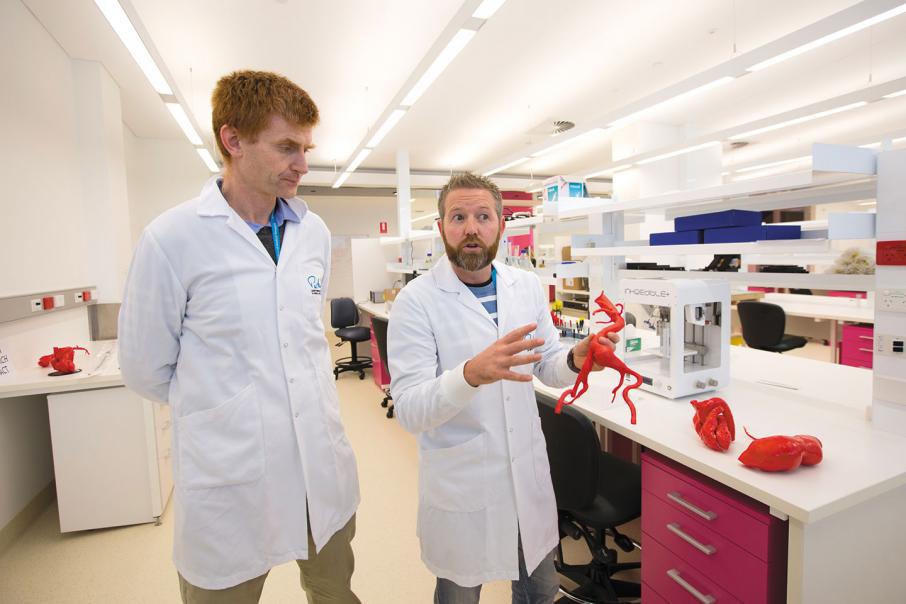 INNOVATIVE: Brendan Kennedy (left) and Barry Doyle with a 3D printed plastic aorta, the main artery that distributes oxygenated blood to all parts of the body. Photos: Attila Csaszar

Perth could be home to the world’s first 3D bioprinted heart thanks to a new engineering program launched last month, focused on technological solutions for medical problems.

THE University of Western Australia and Harry Perkins Institute of Medical Research have teamed up to create a research program seeking innovative solutions to some of the most common medical problems afflicting Australians.

The Biomedical Engineering@Perkins program claims to be unique to WA in that it brings students, engineers, doctors, and scientists together in a research environment.

One Australian dies every 12 minutes from cardiovascular disease. Research is under way at the UWA lab to develop new equipment that can detect people at risk of heart attacks, with the big-picture goal of creating the world’s first implantable heart via 3D bioprint technology.

“We can put living cells into those soft materials to print structures that are technically alive.

“The organ waiting list is practically impossible to get on to, so in the future we’d love to be able to just print hearts.

“It sounds quite far-fetched but we think in 20 years’ time it could be possible.”

A dedicated tissue-engineering lab will be integrated in the next few years, but for the moment Dr Doyle has applied engineering tools to 2D images and has 3D-printed a plastic model aorta.

“With pretty much any type of medical problem the patient typically receives lots of medical imaging and a surgeon will base decisions on these images,” Dr Doyle said.

“If a surgeon has an unusual aneurism and they can’t visualise it on the screen, having something like that (a 3D model) to handle so they know what they’re facing going into surgery could enable them to plan better.”

He said the technology was not restricted to implantable organs, with cosmetics company L’Oréal having already invested in similar technology for testing its products on bioprinted skin instead of animals.

Research into how to reduce the number of incisions for breast cancer patients has shifted to the program’s second lab.

The ‘bioimaging research and innovation for translational engineering’ lab is headed by UWA school of electrical, electronic and computer engineering researcher Brendan Kennedy, who specialises in novel imaging techniques.

After a conversation with a surgeon who wished there was a cancer locating ‘magic wand’ in theatre, Dr Kennedy set about developing technology that combined a surgeon’s sense of touch with high-resolution imaging to locate tumours.

“Surgeons don’t have any tools to help them identify the cancer during the surgery, they literally use their eyes and touch; that’s why they get it wrong so many times,” Dr Kennedy said.

“A tumour is stiffer than surrounding tissue so the idea was to translate that sense of touch to the micro scale and form an image of how tissue feels.”

Dr Kennedy has been approached to commercialise the tool and in future hopes to 3D print his imaging technology as a thimble encased in a glove.

“Identifying the tumour during the surgery allows the surgeon to take an extra piece of tissue,” Dr Kennedy told Business News.

“It is a lot easier than identifying the tumour in the pathology lab two days later, and it reduces the numbers of incisions.”

Dr Kennedy said the first two laboratories would form the nucleus of a much larger platform, to create a biomedical hub in WA.

“We have a strategic advantage in Perth,” he said.

“We’re in the same time zone as Singapore, where the Asian headquarters of most of the top medical devices companies are, and there’s also an opportunity to develop devices and solutions in remote health.”

Dr Kennedy said the program was all about breaking the boundaries between disciplines so that startup companies, investors, researchers, and engineers from local universities and around the world could collaborate within the same biomedical space.

All 16 staff members involved in the program have graduated with mechanical and engineering degrees, but will be applying their skills to medicine.

“If you look back 10 years ago, the engineering tools we have today weren’t accessible to surgeons,” he said. “There wasn’t that clear link between engineering and medicine.”

Already, about 100 UWA students are enrolled in a new introduction to biomedical engineering masters unit, and Dr Doyle said there were plans to start a new four-year PhD program.

“As well as creating new medical devices, the program aims to create a new biotechnology industry by training engineers in new ways of thinking,” he said.

“This state is ready for a new industry employing engineers in research institutes and hospitals to improve health.”