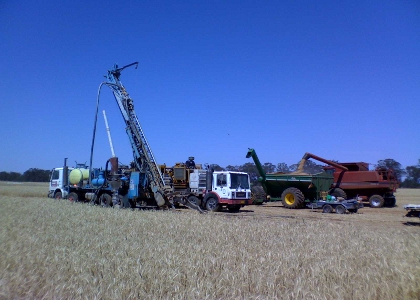 Under changes approved by cabinet today, federal environmental powers will be extended to cover the cumulative impacts on water of new CSG wells and mines.

National environment law will be changed to require federal assessment and approval of coal seam gas and large coal mining developments which have a significant impact on a water resource.

Environment and Water Minister Tony Burke says while the government will seek more information from business, it's not seeking to have "a needlessly delayed" process.

He says the additional information required in many instances will involve data that has already been collected in the state approval process.

The Australian Petroleum Production and Exploration Association said the government’s new regulations exemplify what is wrong with the “duplicate and inefficient” management of coal seam gas and coal developments.

“The federal plan to introduce an industry-specific trigger in its environmental regulation is a textbook example of how to increase costs to industry while delivering absolutely no environmental benefit,” Mr Byers said in a statement.

Mr Byers said today’s announcement had little to do with fact or science, and was rather a political statement.

“It flies in the face of everything COAG is doing to reduce red tape and deliver consistent, efficient regulation,” he said.

“Burying the gas industry in unnecessary regulation has real consequences and will inhibit the industry’s ability to do what is so important to so many: produce the natural gas needed by thousands of Australian households and businesses.”

Acting Minerals Council of Australia chief executive Melanie Stutsel also said there was no need to increase regulatory burdens on the sector.

“The proposed changes will do nothing to enhance Australia’s reputation as an investment destination,” Ms Stutsel said.

“Project approval times in Australia are already well in excess of the international average and the plan put forward today will simply add to those delays for no environmental gain.”

Western Australia’s Conservation Council backed the amendments, but fell short of giving them its full support, expressing concerns over the exclusion of shale and tight gas resources in WA from the proposal.

“We call on Minister Burke to expand his proposed amendments to include any unconventional gas development, whether of CSG, or shale and tight gas.”

Independent MP Tony Windsor, who in 2010 demanded independent scientific regulation of coal seam gas and coal projects, welcomed the government's announcement, saying it was a win for water and for the farming sector reliant on water.

"It is important to have a process in place to give all involved confidence that any decision made would be based on science and not on short-term economic return to the state governments," he said in a statement.

"My push has always been about getting a process that the community can have confidence in."

An anti-CSG group said the changes were a positive start but would mean nothing unless further action was taken.

"This reform today is a step forward on a long road to genuine reform of coal and gas mining laws in Australia," said Carmel Flint, from the Lock The Gate Alliance.

"It has only been achieved because of the determination of people all around Australia to protect our priceless water resources."

Ms Flint said that the real challenge for the government would be to reject coal and gas mining projects that have been assessed by experts to be "damaging".

"A water trigger is a useful addition to the federal laws - but it means nothing unless it is backed up by the political courage to reject damaging coal and gas mining projects.

"The real test of this change will be in whether the Federal Government rejects the coal mines planned for the Liverpool Plains, and the Arrow coal seam gas project in Queensland, which was slammed in a review by the Expert Scientific Committee yesterday."