Iron ore producers have maintained their dominance over the BNiQ Search Engine Biggest Exporters list, as LNG producers are slow to start up. Click through to see the annual list of the state's biggest exporting companies. 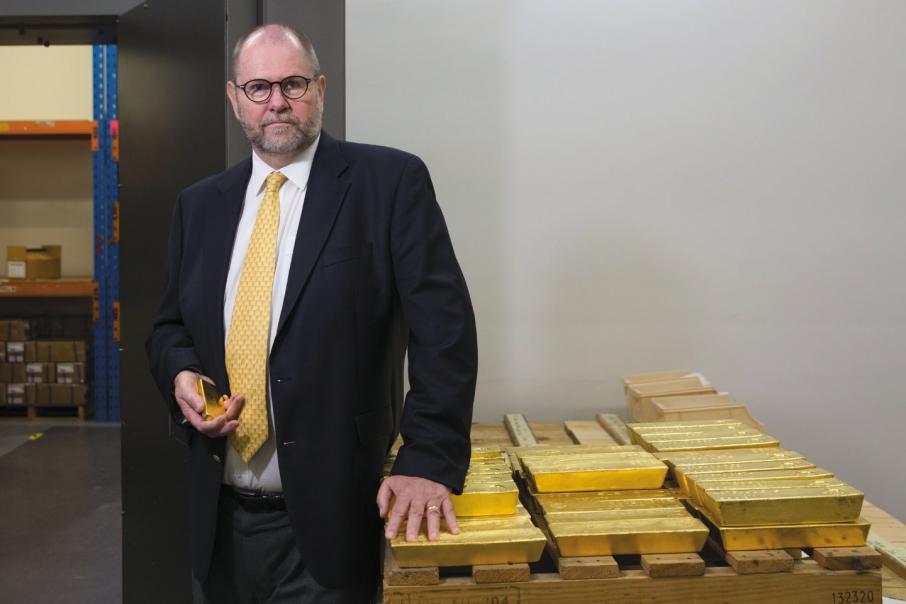 Iron ore producers have maintained their dominance over the BNiQ Search Engine Biggest Exporters list, as LNG producers are slow to start up.

Iron ore majors Rio Tinto and BHP Billiton remained Western Australia’s export powerhouses in 2015-16, representing almost 40 per cent of the combined $91.3 billion in revenue generated by the state’s major sellers to foreign markets, according to the latest data in the BNiQ Search Engine.

The BNiQ Biggest Exporters list measures WA export revenue from the most recent financial year, providing the latest figures for 25 businesses from mining, gas and agriculture, which make up the leading cohort of offshore-focused producers. 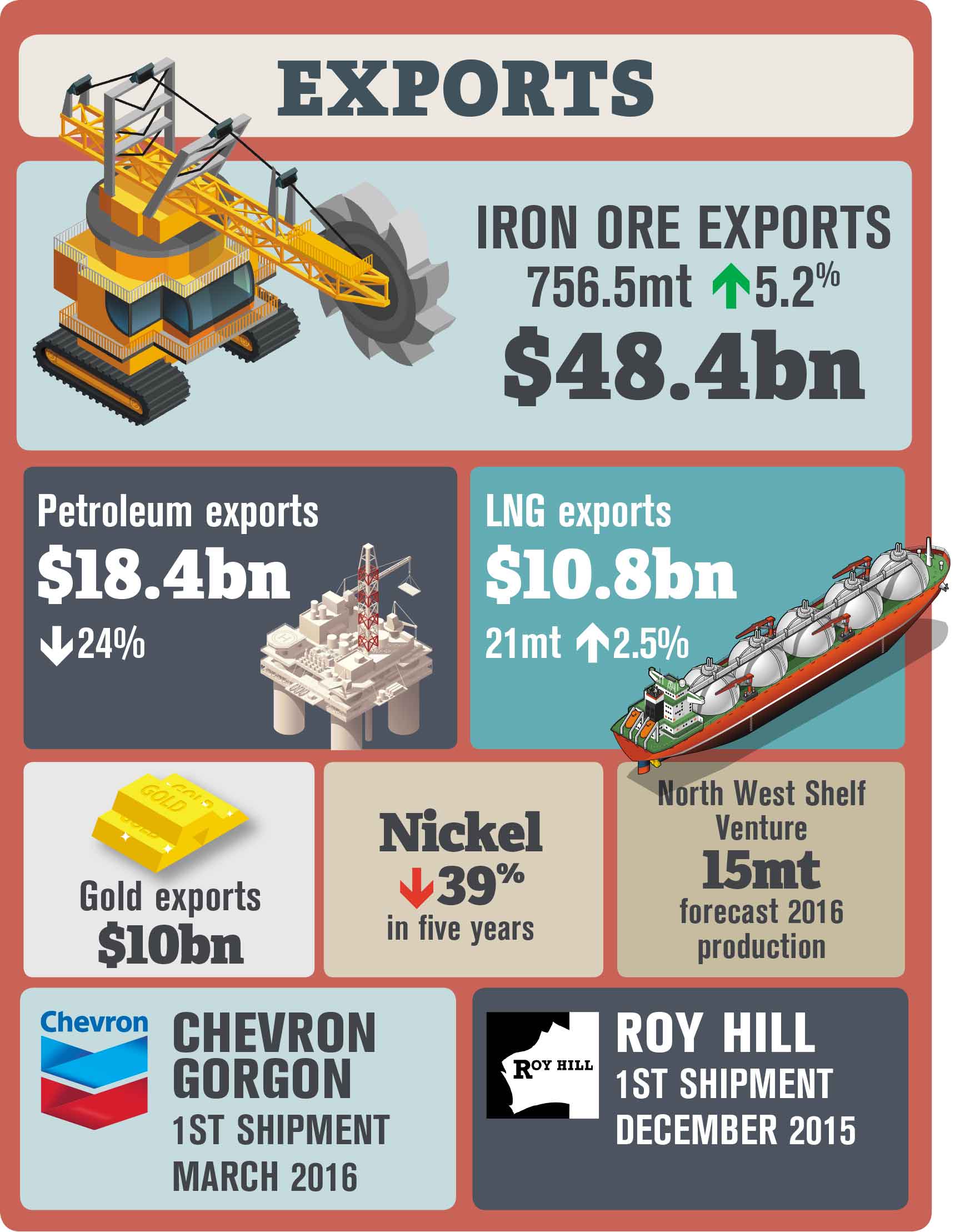 And while the iron ore miners continue to dominate, with bigger volumes helping offset lower prices, there has been movement within the ranks of the top 10.

State government-owned Gold Corporation jumped one place to fifth and alumina giant Alcoa of Australia was up two places to seventh on the list.

Energy players lost ground in this year’s list, with Woodside Petroleum down one position to sixth, however recently commissioned and additional future LNG plants from companies such as Chevron and Shell are likely to change the mix at the top of the exporters list in coming years.

It’s also likely a new processing plant could propel Chinese company Tianqi Lithium into the top 20, although it won’t come close to knocking off many of the state’s largest iron ore producers.

Outside of resources, agribusiness is the next most important industry in terms of WA export revenue. Grain handler CBH Group dropped down one spot to rank ninth, but strong rains this season and increasing demand for food from Asia are expected to drive up growth in that field.

It was a difficult year for Rio Tinto, with WA export revenue down nearly 22 per cent to $19.3 billion in the 2015 calendar year.

The iron ore division fared worst over the company’s calendar year-based reporting schedule, with exports 23 per cent lower despite the company’s volume produced in its operations up 12.6 per cent to 263 million tonnes.

Fortescue Metals Group held tightly on to fourth spot on the BNiQ Search Engine exporters list, with Australian dollar revenue of $9.5 billion, only slightly down on $9.9 billion in the previous financial year, aided by a lower exchange rate.

Fortescue chief executive Nev Power said at the time that production of 169.4mt had been slightly up thanks to favourable weather conditions, and would continue close to that level in the 2017 financial year.

He said the year ahead would be positive, with the Chinese government’s One Belt, One Road infrastructure program and industrialisation underpinning ongoing demand.

Fortescue provides almost one fifth of China’s imports of iron ore, Mr Power said, although the company would be targeting new markets, including in the developing world.

Both Atlas and Mineral Resources improved their revenue numbers slightly, while Hancock’s Roy Hill and Citic’s Sino Iron projects are completed and ramping up production.

As Hancock is a private company, Business News estimates production at Roy Hill of 12.5mt in the year to June, in addition to Hancock’s 24mt share of the Hope Downs joint venture.

When Roy Hill production reaches capacity, assuming no change in prices, Hancock would rise to seventh on the Biggest Exporters list.

Citic Pacific would also be expected to move upwards as its operation reaches capacity.

In total, 756mt of iron ore were produced during the most recent financial year, a 5 per cent increase on the 12 months to June 2015, according to the Department of Mines and Petroleum.

“You’ll certainly see a significant jump in overall export volume, and output, in terms of its contribution to the WA economy over the next few years,” Mr Nicolaou told Business News.

“Particularly as LNG starts to generate significant volumes of exports.”

“There were sharp falls in iron ore and oil prices over the past few years, this year has been a settling period,” he said.

“At least the signs are positive in trend terms, that prices have stabilised and are moving back towards a level where some of the miners are in the money rather than out of the money.”

There was one win in the energy sector, with Chevron’s Gorgon project finally shipping gas this year after a final investment decision in September 2009.

Chevron is yet to crack the Biggest Exporters list, however, as very few shipments took place in the 2016 financial year.

Business News research indicates that Chevron will rank third once Gorgon and Wheatstone are at full capacity, assuming no changes in prices and its share of both ventures is unchanged.

With the Prelude (Shell-Inpex) and Ichthys (Inpex JV) projects also in operation, Shell would rank above Woodside and Inpex above Alcoa, with the latter likely to drop out of the top 10.

Currently, the North West Shelf Venture as a whole remains in third place on the list, with exports of $11.3 billion, based on a calendar year reporting period, down from $16.3 billion in the previous 12 months.

Woodside Petroleum, which has a one sixth share of NWSV and 90 per cent of the neighbouring Pluto project, had export revenue of $5.6 billion.

Most LNG players would therefore have felt a good deal of the brunt from falling oil prices in the 2015 financial year in the 2016 reporting period.

Production volumes were up at Woodside, Mr Bethune said.

“In the last financial year I think there was only one shipment (from Gorgon).

“Then there wasn’t one until about July or August.”

Gold’s strong run has flowed through onto the BNiQ Search Engine list, with revenue at government-owned refiner Gold Corporation up around $2.3 billion as the company jumped one spot to fifth place.

Department of Mines data pins gold production at $10 billion for the 12 months to June, a rise of 10 per cent on the previous corresponding period, the only major mineral to rise for the year.

Gold Corporation chief executive Richard Hayes said the enterprise, which trades as the Perth Mint, had had strong success in its coin minting business, with sales tripling expectations.

The refining business, which turns doré produced in local mines into bullion, had a good year, he said.

“We refined about 280 tonnes of gold last year, the majority of which is turned into value-added product.

“Our strategy over the past 12 months since I took over has been very much around creating value for Australian gold in overseas markets.

“The product that we deal in is very much geared around exports.”

China was the biggest cast bar market, he said.

Despite refining being a competitive business with quite a level of excess capacity at the moment, Mr Hayes said Gold Corporation refined 94 per cent of product mined in Australia.

The start of construction at Tianqi Lithium’s Kwinana plant highlights a new industry that may begin to move up the list.

“It has put that commodity in the spotlight in terms of development opportunity,” he said.

“It certainly gets the state into a new space in terms of the future of energy … it’s an area of great potential and where the state could be a leader globally.”

Research by Business News suggests that, at current prices, exports from the new processing plant and existing mine would be worth between $600 million and $650 million, while an expansion at the Greenbushes mine of Tianqi’s partly owned subsidiary Talison Lithium would lift that amount further.

That would put Talison in the state’s top 20 exporters when it reaches full production.

Tianqi Lithium chief executive Vivien Wu, who was in Perth recently to speak at the commencement of work at the new Kwinana processing plant, said the mine currently produced around 450,000 tonnes of lithium concentrate annually.

Ms Wu said the quality of infrastructure and technical expertise available in WA was among the reasons the state was chosen for the plant.

“The construction cost will be higher but operating costs and production costs are expected to be world competitive,” she said.

“The plant’s close location to the mine is more efficient than transporting the bulk product all the way to China.”