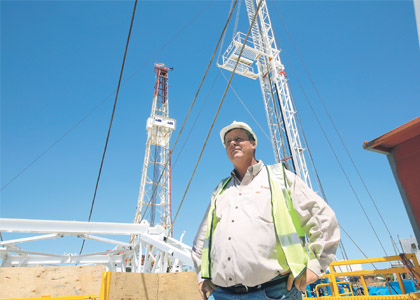 A GROUP of Western Australian oil and gas veterans have invested millions building some of the world’s largest drilling rigs, and are poised to tap into surging exploration in the local onshore sector.

Investment by Argonaut, and Messrs Wells and Currie, has accounted for about half the cost of establishing the company and building its three rigs - one of which is the largest in Australia and valued at $30 million.

It has taken two years for the company to reach the point where construction of the specialised rigs is near completion, and negotiations are under way for its first contract.

Mr Wells, who has 25 years’ experience in the oil and gas industry, told WA Business News while exploration activity was increasing, it was crippled by a lack of available rigs required to carry out the work.

“I was working at Buru and it was very obvious there was a lack of drill rigs in Western Australia; all over Australia it is bad but in WA it’s particularly bad, so there was a huge opportunity there,” Mr Wells said.

“You look at some of the discoveries that are being made - they were never contemplated, and that is only going to increase; that’s what’s driving the demand.”

Mr Wells pointed to the millions of dollars of farm-in money from the likes of ConocoPhillips, Mitsubishi, and most recently Chevron and Beach Energy’s $US349 million agreement as indicators of future demand for Enerdrill’s services.

“People are very excited about what’s in Australia and we see that as an opportunity to put our gear to work,” he said.

The number of exploration wells drilled has increased during the past year, and is expected to continue on its upward trajectory.

“Exploration in WA has typically been quite cyclic,” Mr Wells said.

“[But] the unconventional market is certainly driving a more stable future for drilling.”

Enerdrill also has the backing of Dermott O’Keefe as chairman, who brings 20 years’ industry experience.

Mr O’Keefe said the company had shown its commitment to future work through its importation of the $30 million rig and parts from Canada and China.

Argonaut executive Jon Biesse also sits on the company’s board.

Despite the millions of dollars sunk into the company without a contract negotiated, Mr Wells was unconcerned, saying expectations were that the company would need about 15 rigs if every well planned for WA were drilled.

Operators are currently relying on global contractors, such as Weatherford International, for their drilling services.

But Mr Wells said relocating the rigs was cost-prohibitive for some operators.

“The benefit we’re going to give WA operators is that our rigs are always based here, so they’re not going to have to pay an across-country mobilisation fee,” he said.

“We believe that being in WA we can be very competitive on price; we’re employing out of WA, we’re working here ... our operating costs are lower because we’re working closer to home.”

Mr Wells said that dedication to the local market would continue, with a lack of local work the only reason one of its rigs would need to be relocated.

“But the shareholders would be very grumpy with me if I said ‘no we’re not taking that job in WA’,” he said.