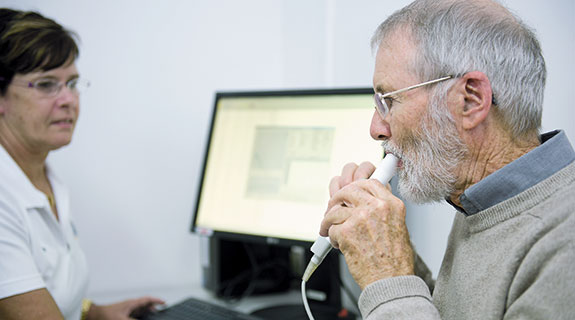 CHECK UP: The BPMRI’s Busselton Healthy Ageing Study has a participation rate of up to 80 per cent of the eligible local population.

AS contributions to science go, the Busselton Health Study is among Western Australia’s most significant offerings.

Gearing up to celebrate its 50th anniversary, the Busselton Population Medical Research Institute, as the organisation overseeing the study is now known, has surveyed thousands of people, assisted countless scientists around the globe, and been a key source of data in hundreds of studies.

BPMRI chair Alan James estimates the study’s data are used by about 40 research projects at any particular time as part of a global collaborative network to understand and solve many of the world’s biggest health issues.

Given the enduring legacy of the study started by Busselton general practitioner Frank Cullen in 1966, it still remains a relatively small operation; a handful of staff in Perth and the South West undertake studies, as well as managing a database of physical samples and written records that has grown significantly with time.

Professor James said the impending anniversary celebrations had provided a catalyst for the organisation to develop a more sustained funding model to ensure the study remained financially robust.

As part of the process of review, the institute is attempting to put a value on the health study’s contribution to WA.

“It’s hard to measure the worth of the study,” Professor James said.

“In the next six months we have engaged a health economist from UWA and she is going to do a study on the return on investment to the state.”

While some of the benefits are obvious, with medical science knowledge and breakthroughs flowing directly back to the broader population, there are other flow-on effects. For instance, the study attracts highly qualified researchers to visit, reside and relocate to WA.

There is also the more immediate benefit of providing survey respondents with relevant clinical results from the many tests and examinations they have been involved in.

Professor James believes the lower rate of smoking in the Busselton region is a direct result of this.

While the Busselton study is not the longest of its kind in the world, it is the most comprehensive to endure over such a period, which is where its value to the global research community lies.

Since 1966, the study has evolved from a series of isolated studies to having a permanent staff and curated database. Many of the step changes in the institute’s work have been due to new technology or scientific knowledge, such as genetics and DNA analysis.

The institute’s latest work is Busselton Healthy Ageing Study, which involves testing 5,000 people born between 1946 and 1964. The participation rate of up to 80 per cent of the eligible population in the Busselton catchment signals the high regard the institute’s work is held in the area.

“Of course you get a free health check,” Professor James said.

“You become more interested in your health when you get over 50.”

That study is looking at the factors that determine why some people remain healthier than others as they age.