Empire targets growth through the drill bit, and by acquisition

SPECIAL REPORT: The domgas market is going through a period of structural change, but history has lessons for those businesses that know where to look. 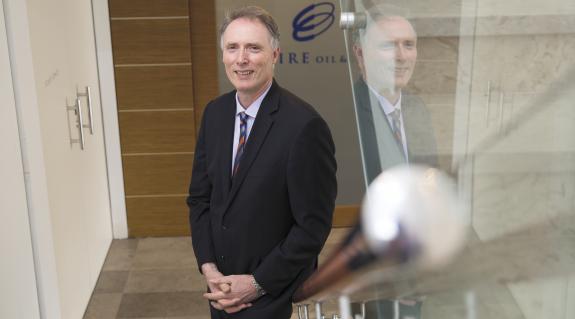 The domgas market is going through a period of structural change, but history has lessons for those businesses that know where to look.

Ken Aitken was given a sobering ‘welcome’ to the sector when he started out in 1985, with the price of oil falling by about 50 per cent in 12 months.

Mr Aitken says while he considers himself fortunate to have kept his job at the time (in the UK), the lessons from that period three decades ago have stayed with him.

“The year after I got into the business there was an oil price crash, to $10 a barrel,” Mr Aitken told Business News.

“What I saw was, you had to adapt, cut costs, survive, and stick to your knitting pattern, focus.”

The strategies employed during that period have become particularly relevant in the current environment, with oil prices less than half what they were just 18 months ago.

“You’ll see through it (and) you’ll come out the other side stronger, because it will rebound,” said Mr Aitken, now chief executive at Empire Oil & Gas.

He said he had generally tried to run a very lean operation in the 18 months since he was appointed to the role at Empire, which operates the Red Gully domestic gas processing facility in the Perth Basin.

This, in part, contributed to the company achieving its maiden net profit in the most recent financial year, a net profit after tax of $7.6 million.

That followed a loss of $2.3 million the previous year, and came on the back of reduced expenses and growing revenue.

It was the first net profit for Empire in almost 18 years on the bourse, Mr Aitken said.

There were some legacy issues with the production plant and well operation after Mr Aitken’s appointment in May 2014, with the plant only having come online the year before.

That was caused by slow flow rates from wells, leading to volatility in output levels and numerous shutdowns.

That instability of production was affecting cash flow, he said.

“The company wasn’t earning the revenue that it needed,” Mr Aitken said.

Performance lifted in the 12 months to June 30, however, with improved uptime, but it has yet to be reflected in the company’s sluggish share price.

The plant now produces 7.9 terajoules of domestic gas per day, with Alcoa of Australia the main recipient, and 300 barrels of condensate destined for the BP refinery.

“For this full financial year we’ve had really good production and production in an oil and gas business drives revenue,” Mr Aitken said.

Another issue Mr Aitken was keen to address in his early days at Empire was the diverse smattering of exploration permits.

“When I started here there were many (exploration tenements); there were about 20 permits, some in the Perth Basin, some up in the Carnarvon Basin,” he said.

Many of those were not in good standing, with the business not meeting its commitments.

“So our strategy was to focus purely on the Perth Basin, on the conventional reservoirs,” Mr Aitken said.

“The real thing for me was … get your business fundamentals right. Production makes revenue; keep your permits.”

With the improved cash flow, Empire repaid a $25 million loan facility with Alcoa, putting it in a position to seek growth opportunities.

Mr Aitken said Empire would be in a much stronger financial position than some similar market cap companies, and aimed to follow the path of Arc Energy to grow into a middle-tier player.

As such, the low price environment was a positive in that it put downward pressure on drilling costs, with the company anticipating an exploration program in coming months.

That will start at Red Gully and later move near Sydney-based operator AWE’s recently successful wells. The purchase of tenements would also be on the radar.

Although domgas is a much smaller market than the state’s LNG exports, it is still a hub of activity.

Following the start of production at BHP Billiton’s Macedon project two years ago, the landscape has been changed by the sale of US player Apache Corporation’s assets to Brookfield Asset Management and Macquarie Capital-backed Quadrant Energy.

That company now accounts for around 40 per cent of the gas sold in Western Australia.

Further change will come when the two major Chevron LNG plants, at Wheatstone and Gorgon, come online in coming years.

Part of their production will be reserved exclusively for domestic use, bringing around 400 tj/day on to the market.

That could, over time, offset a decrease from the North West Shelf Venture, which has contracts for provision through to 2020.

It will create both opportunities and challenges for small, domestic producers, which will face increased competition.

On the flipside, large exporting players will be allowed to offset their reservation requirements with purchases on the domestic market, which might help some local players to seal production deals.

Nonetheless, Mr Aitken was cool on the impact of domgas. “Our advantage is that we’re closer to the city … our cost of delivery is a lot lower,” he said.