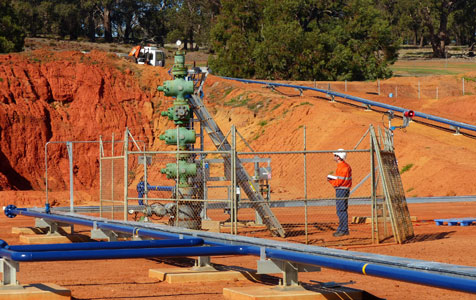 Empire Oil & Gas has stepped up to the ranks of producer, with gas and condensate flowing this week from its operation near Gingin in the Perth Basin.

The $35 million Red Gully processing facility, a joint venture between Empire (76 per cent and Brisbane-based electricity supplier ERM Power (24 per cent), will deliver gas to the Dampier to Perth Natural Gas Pipeline.

Construction of the facility was fast-tracked with a $25 million cash injection from Alcoa, which is a pre-payment of gas supplies to the alumina producer.

Alcoa has been keen to support the development of new gas suppliers in its search to diversify its energy sources.

Empire has a contract to sell 15,000 terajoules (TJ) of gas to Alcoa as part of a gas sales agreement, with potential for this number to increase as exploration continues.

Empire will also truck condensate (light crude oil) to customers, including BP at its Kwinana refinery.

The company’s exploration permit (EP389) in the prospective region includes reserves of both conventional and unconventional (shale) gas.

The company is hoping to be the first to commercially produce gas in Western Australia from unconventional sources, given its location in the Perth Basin.

Empire managing director Craig Marshall said based on three seismically mapped prospects within the permit, the potential recoverable conventional gas at Gingin, about 100 kilometres north of Perth, is estimated at 200 billion cubic feet (bcf) and 9.2 million barrels of condensate.

Of Empire’s 11 permits in the Perth Basin, the evaluation of data from five has shown the unconventional potential is estimated at 92 trillion cubic feet (tcf) and 14 billion barrels of condensate.

Mr Marshall said the location of the Red Gully facility within EP389 meant the potential for future unconventional gas production from new discoveries could be treated using its new facility, enabling it to fast-track production.

The Red Gully facility is processing up to 10TJ of gas and 500 barrels of condensate a day and can be expanded to process up to three times current levels.

“A robust gas price and a lower Australian dollar helps and it’s cheap for us to truck condensate to the BP refinery, which is only about three hours away,” Mr Marshall said.

“The Red Gully facility will certainly make a substantial difference to the economics of recovering gas, which gives us a great economic advantage.”

The explorer has stepped up its search for gas and is planning back-to-back drilling of three prospects near its Red Gully facility.

This follows fruitful 3D seismic surveys at Wannamal, just north of Gingin, designed to firm up its prospects.

The drilling program will evaluate both conventional and unconventional resources and is due to start early next year.

“Drilling in the Perth basin is nowhere near as expensive as in remote areas such as the Canning Basin,” Mr Marshall said.

The Perth Basin and Canning Basin, in the Kimberley, are estimated to contain vast amounts of unconventional gas.

This gas, known as shale or tight gas, is not found in continuous underground chambers like natural gas, but exists in bubbles that are harder and more expensive to extract. Companies, Buru Energy, have stepped up their exploration for unconventional gas as resources of natural gas are depleted.