Perth-based company Empire Oil and Gas has announced that it expects to triple its cash sales this financial year as it begins tranche 2 of its gas sales agreement with Alcoa. 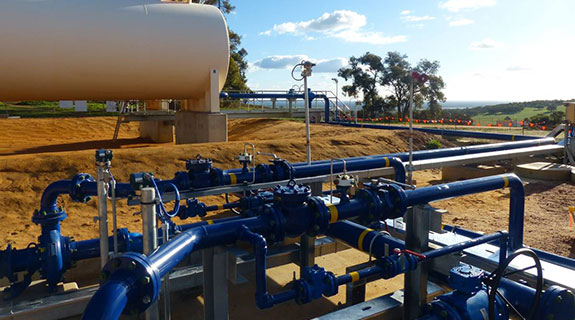 Empire's Red Valley gas project on day of commissioning in 2013.

Perth-based company Empire Oil & Gas has announced that it expects to triple its cash sales this financial year as it begins tranche 2 of its gas sales agreement with Alcoa of Australia.

The company anticipates an additional $14 million in gas sales in the 2016 financial year, with a predicted $23 million in combined gas and condensate revenues for the year.

Tranche 2 of the agreement with Alcoa began on July 31, earlier than the expected September start date.

A significant factor in Empire’s predicted increase in revenue is the fact that the company will be paid for gas produced in the second tranche of its Alcoa agreement, while the first tranche had been prepaid.

This comes off a higher-than-expected demand from Alcoa in the second half of June quarter, with Alcoa requesting in May that Empire’s Red Gully project increase output to 9.5 terajoules a day.

Empire says this led to a quarterly production figure of 793TJ, significantly above the initial 697TJ target.

Last week, Empire announced an increased calculation of the available gas and condensate reserves of its Red Gully facility north of Gingin.

The company expects the additional reserves to extend the potential lifespan of the project by two years, and allow for the possibility of extra cash flow through additional sales.

Empire chief executive Ken Aitken said that the start of tranche 2 would have a major impact on the company’s financial position.

“The sharp increase in cash receipts will allow us to meet our operating expenses and invest in the next phase of growth,” he said.

“We have the prospect of further growth in cashflow from additional sales following the latest increase in our reserves at the Red Gully project.”

Empire is currently providing 8TJ/day to Alcoa under their fixed-price agreement, 80 per cent of Red Gully’s 10TJ/day capacity.

Shares in the company were trading flat this morning at 0.5 cents a share.