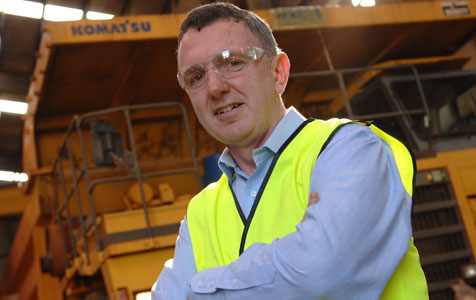 Shares in mining equipment supplier Emeco Holdings have fallen sharply today to a four-and-a-half year low after the company downgraded its profit forecast for the second time in two months.

The company said it expects to report an operating profit after tax in the range of $35 to $36 million, for the year to June 2013.

That equates to an operating profit in the second half of the financial year of just $10 to $11 million.

In addition, it anticipates a non-cash write-down of $10.5 million (pre-tax) in the second half, in connection with its Guildford facility and legacy inventory from its discontinued sales and parts business.

In February, it said the second half result would be “slightly below” the interim operating profit of $25.1 million.

In April, it revised down that forecast, saying the second half would be in the range of $15 to $19 million.

The company said today there were several contributors to the latest downgrade.

Its fleet utilisation rate in Australia has declined slightly to 42.5 per cent, with an expected uplift failing to materialise because of project delays.

In addition, payments for a contract in Indonesia have not been made, as expected, while in Canada activity in the oil sands market has been “subdued”.

The one positive the company noted was the performance of its Chile business, which helped to lift global fleet utilisation to 52 per cent.

It said staff numbers were being reduced “where possible” in Australia and Indonesia while discretionary maintenance was being “strictly controlled and prioritised”.