Ten years after paying a record WA price of $57.5 million for their Mosman Park property, mining magnate Chris Ellison and his wife Tia Ellison are planning to demolish the existing dwellings and build two new houses. 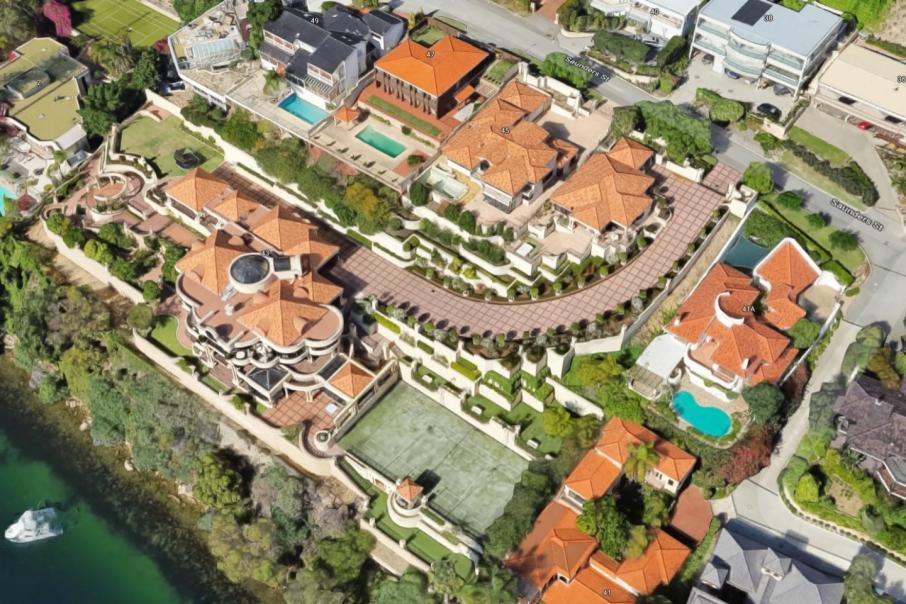 Four buildings on Saunders St will be demolished under the plan. Image: Google Maps

They have submitted plans through Nedlands firm Boughton Architecture to the Town of Mosman Park for the development, which has been recommended for approval by council officers.

They plan to build two grouped dwellings with swimming pools and a tennis court on their adjoining blocks, at 41a and 43 Saunders Street.

It will include six bedrooms, parking for 12 cars in the carport and garages, along with a gym, gallery and boat shed.

The council agenda notes that lot 55 (43 Saunders Street) will be extensively excavated to enable the lowering and setting back of the house further into the landscape, resulting in a significant reduction in the mass of the proposed house when viewed from the river.

The maximum height of the house will be 2.7 metres lower than the highest point of the existing three-storey dwelling, built by iron ore heiress Angela Bennett.

Lot 55 is an expansive 7,565 square metres and will include a second new house - a two-storey dwelling with four bedrooms and a two-car garage.

To make way for the new dwellings, the Ellisons plan to demolish two existing houses plus the caretaker’s unit and a gate house.

The council agenda, prepared by council officers, notes the proposed development is of significant scale and includes a number of large variations to the deemed-to-comply provisions of the area’s planning framework.

“However, the proposal enhances the character of the area, in the majority of instances improves amenity for surrounding neighbours and respects the natural river landscape it is set upon,” the agenda states.

“Overall, the proposal in its current form is considered to be acceptable and is recommended for approval, subject to conditions.”

They subsequently bought two nearby properties in 2014.

They paid $5 million for 41a Saunders Street, which comprises 827sqm and is part of the new development. It will be used for a 'service compound', driveways to the two new houses and landscaping.

They also paid $6.6 million for a third property in Saunders Street.

Mr Ellison is the co-founder and managing director of mining and contracting company Mineral Resources. His shareholding is worth approximately $338 million, following the sale of several substantial holdings over the years.